Update 1240ET: In what CNN described as a "rate public warning," the FBI released a statement Wednesday saying it has "grave concerns" over the accuracy of the House Intel Committee's memo describing purportedly egregious FISA abuses.

"With regard to the House Intelligence Committee’s memorandum, the FBI was provided a limited opportunity to review this memo the day before the committee voted to release it. As expressed during our initial review, we have grave concerns about material omissions of fact that fundamentally impact the memo’s accuracy," the FBI said in a statement.

Update 1130ET: Bloomberg reports that FBI Director Christopher Wray told the White House he opposes release of a classified Republican memo alleging bias at the FBI and Justice Department because it contains inaccurate information and paints a false narrative, according to a person familiar with the matter.

Of course, given the allegedly terrible picture the memo paints of The FBI, it is perhaps not entirely surprising that Wary would oppose its release, however, if this sourced reporting proves correct, it plays very badly for Republicans as it would seem to confirm Rep. Schiff's accusations.

As we detailed earlier, just before President Trump headed to the Capitol for last night's "State of the Union", the Washington Post reported that top Justice Department officials made a last-ditch plea on Monday to White House Chief of Staff John Kelly about the dangers of publicly releasing the memo.

Shortly before the House Intelligence Committee voted to make the document public, Deputy Attorney General Rod J. Rosenstein warned Kelly that the four-page memo prepared by House Republicans could jeopardize classified information and implored the president to reconsider his support for making it public.

But those pleas from Rosenstein - who isn't exactly the West Wing's favorite lawman, and whose name apparently appears in the memo - have apparently fallen on deaf ears.

Last night, President Trump promised a lawmaker that the memo would "100%" be released now that the House Intel Committee has voted to approve its release. 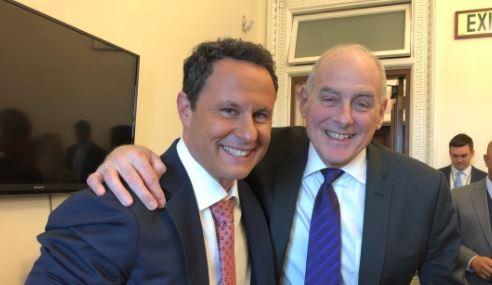 And during a Fox News Radio interview with Brian Kilmeade, Chief of Staff John Kelly added that the memo would be publicly released "pretty quick."

"I'll let all the experts decide that when it's released. This president wants everything out so the American people can make up their own minds," he said.

John Kelly says on Fox News radio that he's seen the Nunes memo and that it will be "released pretty quick." Kelly: "I'll let all the experts decide that when it's released. This president wants everything out so the American people can make up their own minds."

While Democrats have accused Republicans of using the memo to try and interfere with the Mueller probe, the Wall Street Journal editorial board today explained that Intel Committee Chairman Devin Nunes adhered to procedure during the process of compiling and distributing the memo. The Democrats, who have compiled a memo of their own, have not.