Yellen's last FOMC meeting has come and gone and Morgan Stanley suggested "where's the snooze button?" in their preview post.

Perhaps the most notable development since the December meeting has been the sharp re-pricing of yields, notably inflation breakevens. The year breakeven is 20 bps higher, and the 5y/5y breakeven is nearly 30 bps higher. As such, an acknowledgement that "market-based measures of inflation compensation have risen" seems likely.

The Fed was hawkish:

The Fed changed the language of its inflation outlook quite notably with the key language as follows:

... and no longer as it was in December:

"...remain somewhat below 2 percent in the near term"

Even Goldman, in its hawkish version expected this line to remain:

Additionally, The Fed noted the market's inflation outlook has come their way...

Market-based measures of inflation compensation "have increased in recent months.''

"While many market participants don’t expect a major change in Fed policy with the handoff, we think the improving growth environment and anyone not named Janet Yellen [a policy dove] means more hawkishness, at the margin," said

The committee could be slightly more hawkish, or inclined to raise rates, with this year's changes in the voting rotation. The heads of the Cleveland, Richmond, Atlanta and San Francisco Feds rotate on, replacing Chicago, Dallas, Minneapolis and Philadelphia Fed leaders. The Chicago and Minneapolis leaders, Charles Evans and Neel Kashkari, dissented from higher rates in December.

Changes in Fed governors could do the same. Randal Quarles, vice chairman for regulation, joined the committee in October. Nominee Marvin Goodfriend is awaiting confirmation.

Ahead of today's FOMC statement, the market was pricing in 2.75 rate hikes (of 25bps each)... and a 93% probability of a March rate-hike. 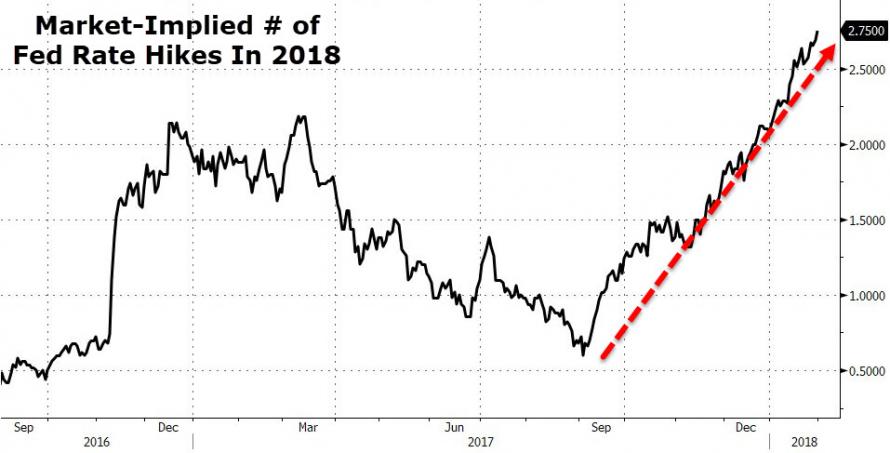 The March rate-hike odds are now at 99.1% after The FOMC.

Since The Fed hiked rates in December, Gold is up 7.6% outperforming The Dow (+6.8%) and The Dollar and Treasury Bond prices have tumbled... 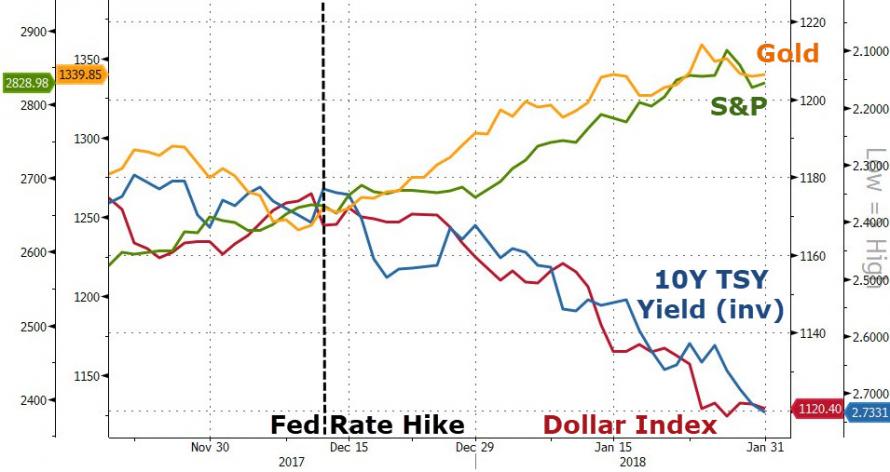 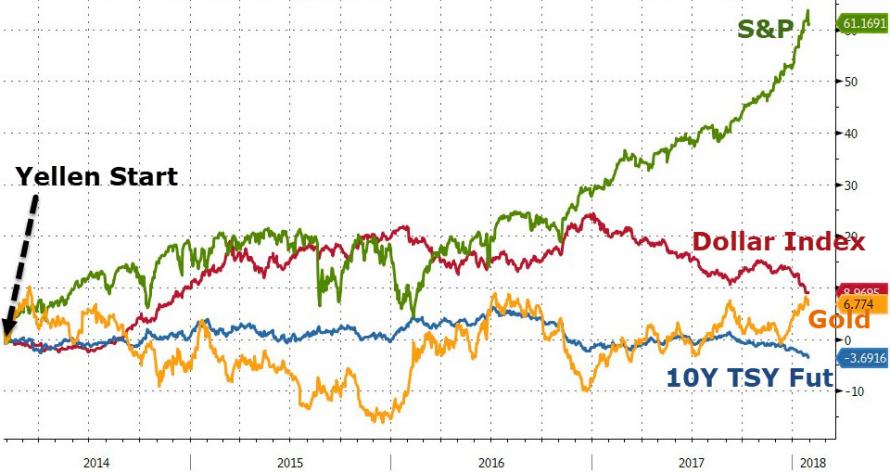 However, Janet is leaving The Fed with a big problem... Financial Conditions are collapsing easier and easier despite The Fed's tightening... 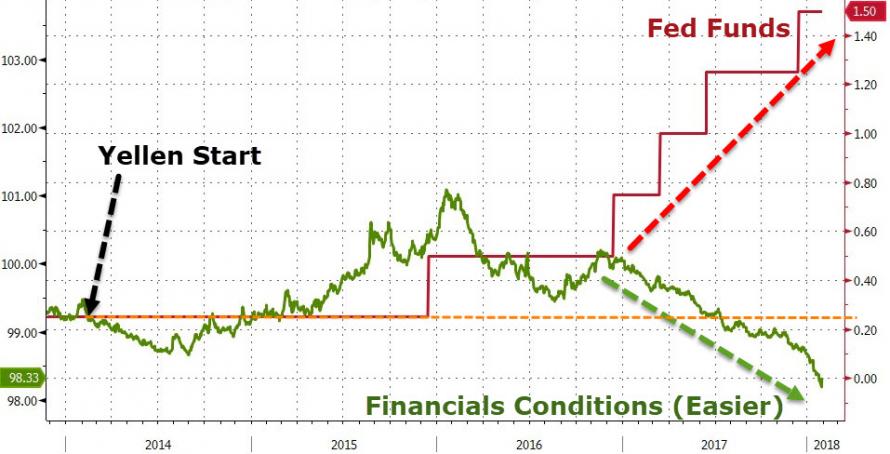 And so, what to expect for the rest of the day? Tough to say - with no press conference... 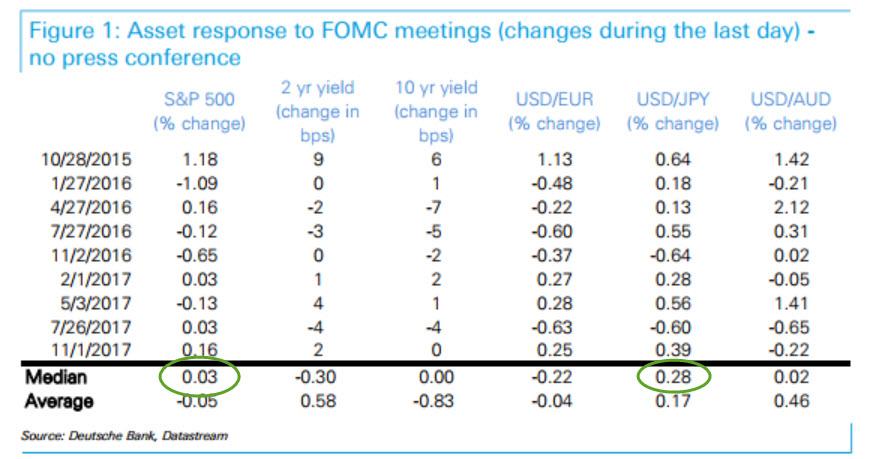 This was Goldman's "Hawkish" Version of the expected Fed Statement:

Information received since the Federal Open Market Committee met in November December indicates that the labor market has continued to strengthen and that economic activity has been rising at a solid rate. Averaging through hurricane-related fluctuations, job Job gains have been solid, and the unemployment rate declined further remained low. Household spending has been expanding at a moderate rate strengthened, and growth in business fixed investment has picked up in recent quarters. On a 12-month basis, both overall inflation and inflation for items other than food and energy have declined this year and are running below 2 percent. Market-based measures of inflation compensation have risen recently but remain somewhat low; survey-based measures of longer-term inflation expectations are little changed, on balance.

Consistent with its statutory mandate, the Committee seeks to foster maximum employment and price stability. Hurricane-related disruptions and rebuilding have affected economic activity, employment, and inflation in recent months but have not materially altered the outlook for the national economy. Consequently, the Committee continues to expect that, with gradual adjustments in the stance of monetary policy, economic activity will expand at a moderate pace and labor market conditions will remain strong. Inflation on a 12‑month basis is expected to remain somewhat below 2 percent in the near term but to stabilize around the Committee's 2 percent objective over the medium term. Near-term risks to the economic outlook appear roughly balanced, but the Committee is monitoring inflation developments closely.

And here is the real thing: let's see how close it comes : Full FOMC Statement Redline below 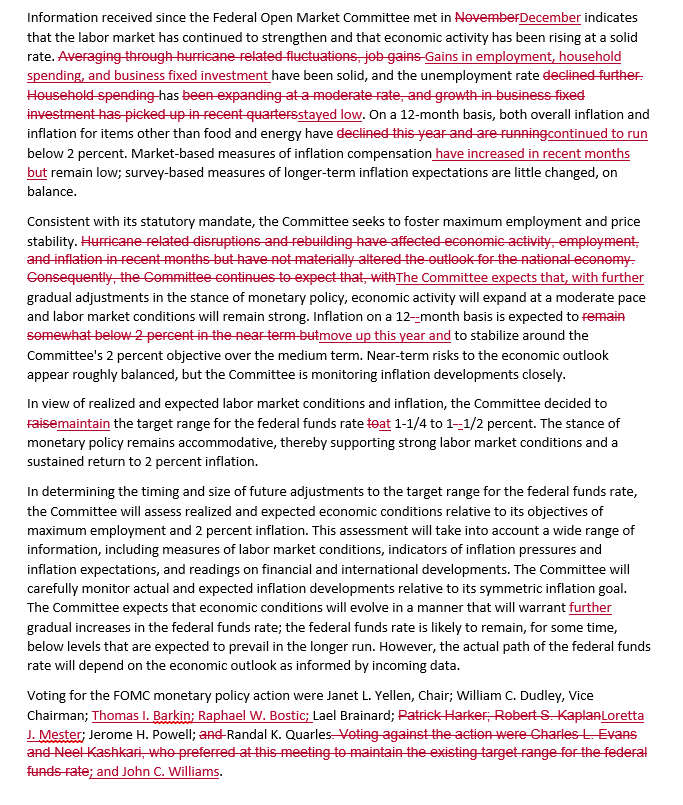 And finally, in a humorous nod to her dress-code, The NY Fed's trading room - otherwise known as The (Millennial) Plunge Protection Team -had their own way of bidding Yellen farewell...