Via 'Investing In Chinese Stocks' blog,

Another cyclical slowdown in China looks to be underway...

December's FAI went negative yoy and now an anecdote pointing to another cash crunch in the banking system. 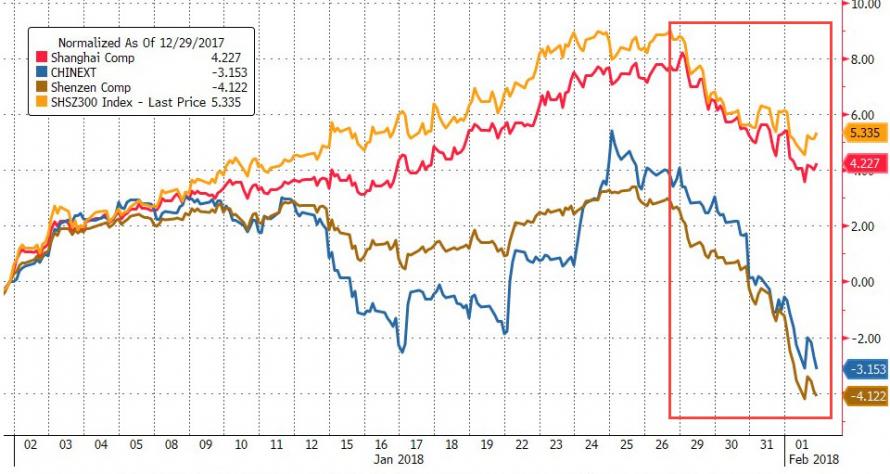 Every year ahead of Spring Festival (February 16 this year) cash gets tight, but during the prior tightening cycle from 2013-2015 the cash crunch almost became a quarterly event. There is no spike in SHIBOR as there was in 2014 yet, but there are other similarities. The yuan rose ahead of the crunch (it was in the middle of a bull market from 2010 to the start of 2014) and the first sign of the crunch came in the first quarter-end following the Taper Tantrum and U.S. interest rate spike. The yuan is rising again versus the dollar, the Fed began shrinking its balance sheet in October and U.S. interest rates have spiked.

The annual deposit war is particularly fierce this year. The last day of January in the [WeChat] friend groups, bankers "beg" for deposits one after another.

"There are more than 20 banks looking, every one is asking for deposits." a listed company's small partner told reporters that he had been too busy to reply, however. The banker's nickname is "Guixie." [a combination of beg and thanks]

"Perhaps because the New Year approached, company payments are more numerous, bank account capital is less, bank competition for deposits is even more intense." A banking source told reporters bluntly, these days are quite difficult.

"Early this year, due to the strong demand for credit, debt problems continue to simmer, more banks seek deposits, especially regulatory assessment, have the resources available." Minsheng Bank Wang, director of Center for Financial Research Fellow a peak, told reporters that the banking system liabilities is difficult, debt problem has been going on for some time, mainly due to foreign exchange increment is not enough, shadow banking is inhibited. In 2017, the banking system credit growth significantly faster than deposit growth, resulting in rising loan-deposit ratio, sounding the alarm over the assets and liabilities, liquidity management pressures.

On the one hand, the news suggests credit growth was solid in January, but is also suggests the financial system is hitting some hard limits as credit growth outpaces deposits. The highlighted portion confirms Jeffrey Snider's description of the current state of affairs as a "dollar" or eurodollar problem. The Chinese banking system is starved for dollars.

Alhambra: The Chinese Appear To Be Rushed

While the Western world was off for Christmas and New Year’s, the Chinese appeared to have taken advantage of what was a pretty clear buildup of “dollars” in Hong Kong. Going back to early November, HKD had resumed its downward trend indicative of (strained) funding moving again in that direction (if it was more normal funding, HKD wouldn’t move let alone as much as it has). China’s currency, however, was curiously restrained during that time.

No more. Since the middle of last week, CNY has been sharply higher. All those “dollar” balances that were surely sitting in Hong Kong perhaps just waiting for year-end were moved almost all at once.

Maybe there were some government concerns for those end-of-year activities in eurodollar markets that were clearly pushed askew by what’s going on over there across the Pacific. I’m not aware of any official deadlines or regulatory requirements that would have condensed the “dollar” flow into such a tight calendar space. It looks instead to have been related to market conditions, particularly since CNY wasn’t the only big mover during that time.

The news at the end of January tells us whatever stress sent the Chinese rushing at year end is still pressuring the financial system.

The picture from 50,000 ft shows that despite a slowdown in M2 growth: 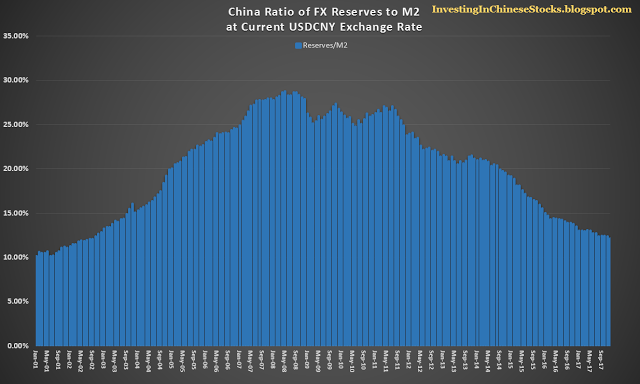 The Chinese financial system's growth is still outstripping the implicit reserves backing it: 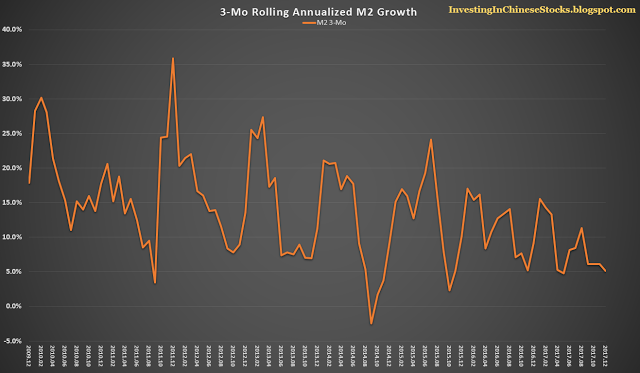 The above chart doesn't matter until it does, such as in August 2015 when the PBoC threw in towel and allowed the yuan to devalue. This time around, the dollar is weakening and the yuan is rising along with the euro, further weakening the yuan's long-term position. China will be forced to devalue sooner than last time, when it took 18 months from the problem emerging in early 2014 to devaluation.

As for the rising yuan, Chinese exporters are already squealing.

Its rapid gains are instead fuelling unease and fears over the negative impact on Chinese exporters, and it has even fanned theories that China is falling victim to a new type of “currency war” started by the US to cut the trade imbalance.

The yuan is a problem at USDCNY 6.3 and USDCNY 6.9 because China has a massive credit bubble.

At one end, the deflationary impact of a rising yuan and at the other, the risk of a major devaluation.

In the middle is the Goldilocks exchange rate, not to strong to trigger debt default, not to weak to trigger outflows.

USDCNY 6.3 in the current environment is too strong. The PBoC is also pinned in this range. Loosen capital controls to let the yuan weaken, exacerbate the liquidity crunch in the banking system and risk uncontrolled depreciation/capital flight. Let the yuan strengthen and risk a credit crisis. Further reverse yuan internationalization and set the yuan price, but risk an economic response from the United States.

China bought two years with its 2016 reflation, aborting a global slowdown stemming from its last decision to slow credit growth. This growth cycle has completed and is turning down again.

The fallout from the prior slowdown started showing up after Spring Festival in 2014. From February 23, 2014: China Real Estate Rage Is Back; Ghost Cities Everywhere; Offshore Yuan Plunges; Talk of Falling Real Estate Prices Across China. Regarding the dip in the yuan, I wrote:

If this keeps up, we may soon hear about a dollar shortage in China, which happened last time the yuan spiked. Also, after the 2011 drop, forex reserves fell.

It will only take a small marginal change in the economic trends to create a hurricane force in the financial markets. Once the market moves the other way, the shift will be swift and brutal because everyone is on the other side of the trade. How many people out there have puts on the yuan and expect China's reserves to start falling?

If history rhymes, there's going to be some significant negative news out of China in March. If that happens, the clock will start ticking on the next global deflationary wave.

The conventional wisdom about equities, interest rates, inflation and emerging markets is wrong again, just as it was in 2011 and 2014.