Introducing "The 3R": Why Goldman Thinks Oil Is Going To $82

It may not be Goldman's historic(ally wrong) "oil to $200 super-spike" call from the spring of 2008  which has so far top-ticked the highest price of crude in history, but in the grand scheme of things, Goldman's call from this morning was not that much different when the world's central banker incubator boosted its price forecast by a third and said global crude markets have probably rebalanced.

So now that the rebalancing narrative is over, Goldman needed a new, catchy narrative, ideally packaged in a handy mnemonic, ala "BRICs." It got just that in the form of, drumroll.... "The 3Rs", or "reflation, releveraging and reconvergence" which letters supposedly "reinforce our bullish overweight commodity outlook."

And not just bullish: "the most bullish in a decade on the 3Rs"

Here is the 30,000 foot summary behind Goldman's rediscovered commodity euphoRRRia, which the bank frames as follows: "The 3R’s unlikely to repeat 2008, but will likely rhyme in 2018."

Strong demand growth against limited supply growth due to OPEC and Chinese supply curtailments created significant reflation in commodity prices last year. During 2H17, commodities were the best performing asset class, posting a solid 18% return. Given the high level of debt held by commodity producers, not only do higher commodity prices reduce the number of bad loans and free up capacity on bank balance sheets, higher commodity prices also help strengthen EM currencies and weaken the dollar via the accumulation and recycling of rising excess savings. On net, this in turn lowers EM funding costs and leads to EM releveraging. More EM leverage leads to more EM growth reconvergence, reinforcing even more synchronized global growth and, ultimately, reflation pressures - creating a feedback loop. Our global Current Activity Indicator (CAI) is tracking 5.1% annualized real GDP growth, and as of last Friday (January 26) financial conditions in the US were the best ever recorded in the history of our Financial Conditions Index.

So based on what Goldman sees as an "increasingly supportive growth backdrop" the bank upgraded its commodity forecasts across oil, copper, iron ore and coal. The breakdown:

Given we have raised our 6-month Brent crude oil target the most, to $82.50/bbl from $62/bbl previously, we have front-loaded outperformance of the S&P GSCI and now expect returns of +15% and +10% over the next 6 and 12 months, respectively.  In addition, with low and declining inventories in key commodity markets, we expect commodity price volatility will rise from the current historically low levels.

Furthermore, Goldman is "also initiating a new 2018 top trade and recommending a long 6-month call option on the S&P GSCI excess return index struck 5% out of the money." With a cost of 2.3%, the breakeven is a 7.3% return with a 4.4 to 1 expected payout based upon our 6-month return forecast of 15%.

To be sure, it wouldn't be a catchy Goldman mnemonic if it didn't have its own "circular" chart to self-validate the U-turn in the bank's sentiment, so that's precisely what head Goldman commodity strategist Jeff Currie put together: 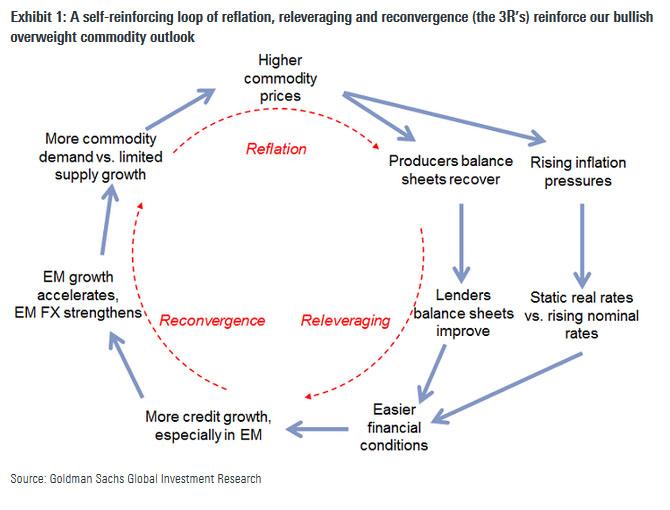 There are many more charts and justifications behind Goldman's mini "super-spike" call in the full note which we are confident readers can track down from their friendly, neighborhood Goldman salesman, but the best summary of what Goldman really meant, was in the following tweet:

$GS calling for $80 oil in six months, which must mean a) the Aramco IPO is dead and b) they have too much length on their books.