NYU economist Nouriel Roubini - aka "Dr. Doom" - has long been a cryptocurrency skeptic. So it's hardly surprising that he delighted in bashing the cryptocurrency during an appearance on Bloomberg TV Friday, where he said the bitcoin boom that carried the price of a single token to $20,000 late last year was "the biggest bubble in human history" and that this "mother of all bubbles" is finally crashing..

And it's not just Bitcoin, Roubini added. There are more than 1,300 cryptocurrencies or ICOs, and “most of them are even worse” than the largest digital token. These constitute a “a bubble to the power of two or three,” he said.

Furthermore, while many of bitcoin's critics (Warren Buffett, Ray Dalio, Jamie Dimon - though Dimon later recanted) have clarified that they see value in "blockchain technology", which many have proclaimed has the potential to change the world by disrupting industries as diverse to Wall Street and health care.

Blockchain has “been around for 10 years, and the only application is cryptocurrencies, which is a scam,” the New York University economist added.

Roubini added that bitcoin "is an environmental disaster." As we pointed out late last year, bitcoin mining already consumes more energy than 12 US states.

After breaking below $8,000 for the first time since November earlier today, bitcoin and other cryptocurrencies aggressively rebounded from a selloff that sent bitcoin lower by roughly 30% at its nadir. 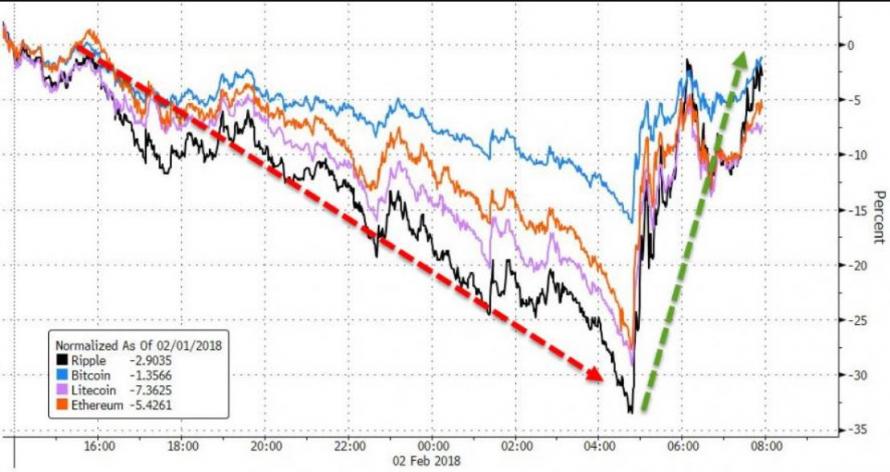