Authored by John Rubino via DollarCollapse.com, 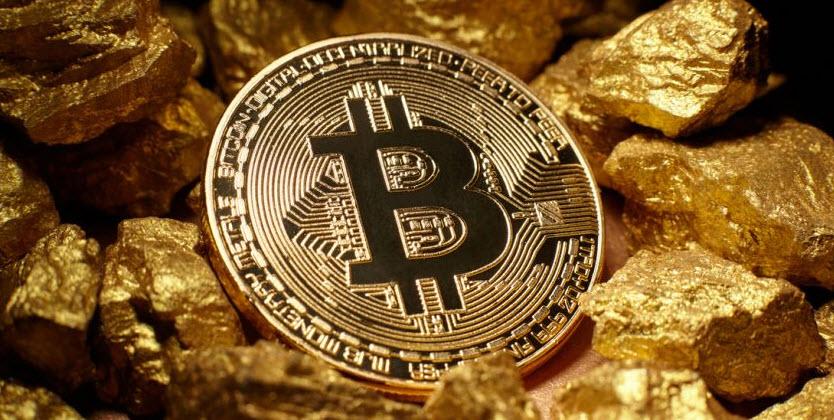 First, the decades-long dream of a gold-backed cybercurrency may finally be realized. Second, gold and probably silver are looking at a big new source of physical demand. Third, the huge number of gold-related initial coin offerings (ICOs) in this largely unregulated pipeline will require buyers to learn how to tell the legitimate offerings from the scams.

(Cointelegraph) – The UK’s Royal Mint, the institution responsible for producing all the physical money the country has for circulation, has announced the launch of its own gold-backed cryptocurrency.

The Blockchain-based coin, called Royal Mint Gold (RMG), is a digital representation of gold stored in The Royal Mint vault.

The Royal Mint Bullion, the Royal Mint company that sells physical gold, is the first company to allow customers to hold gold-backed assets on Blockchain, Tom Coghill, RMG’s Commercial Lead, stated in an interview with Express.co.uk. Coghill also mentioned that one RMG coin is equal to one gram of gold, adding that “it’s real gold you’re holding when you’re holding our RMG.”

A recent report published by the World Gold Council (WGC) compared Bitcoin and gold, declaring that though Bitcoin saw a higher growth in value in 2017, gold would remain an important store-of-value investment.

“Gold has probably had an argument that it’s been a store of value for 6,000 years, bitcoin’s a bit younger and the future of bitcoin is uncertain.”

The ambitious plan, which is subject to a confidentiality agreement, will make it easier for consumers to buy gold.

The mint also plans to make use of blockchain technology, first used as the core component of the digital currency Bitcoin, where it works as a public ledger for transactions.

In the 10 years since its inception, blockchain has been used to track transactions in industries from agriculture to land registration and the music recording industry.

For the Perth Mint, the need to bring investors back to precious metals after a boom in alternative investments such as cryptocurrencies posed an opportunity, according to chief executive Richard Hayes.

“I think as the world moves through times of increasing uncertainty, you’re seeing people look for alternate offerings,” he said.

“And you’re seeing this massive flow of funds into the likes of Bitcoin at the moment because people are looking for something outside of the traditional investments.”

But Mr Hayes said the volatility of some of the current cryptocurrencies meant they did not suit all investors.

And that is where a gold-backed offering may fit.

“With a crypto-gold or a crypto-precious metals offering, what you will see is that gold is actually backing it,” Mr Hayes said.

“So it will have all the benefits of something that is on a distributed ledger that settles very, very quickly, that is easy to trade, but is actually backed by precious metals, so there is actually something behind it, something backing it.”

Some thoughts on gold-backed cryptocurrencies (or tokens or whatever the correct term ends up being):

Most financial markets have trading hours that are limited to the business day. Which means that most US investors can buy and sell, say, Amazon stock or silver coins only when domestic markets are open. Owners of a blockchain asset, in contrast, can wake up in the middle of the night, see an accurate quote, and act on it instantly. Whether this is a good or bad thing depends on the temperament and self-control of the individual. It’s possible that we’re creating a financial time-suck comparable to social addictions like Facebook and Instagram. And maybe a new danger for sleepwalkers…sleep trading?

On the positive hand, when things spin out of control in Asia or Europe, American owners of crypto-gold won’t have to wait until morning (which may be too late) to move their assets out of harm’s way.

Lots of different kinds of gold and silver accounts are already available, with the biggest differentiator being the ownership of the bullion sitting in custodial vaults. With allocated accounts buyers own specific metal bars, while with unallocated accounts buyers are in effect creditors of the company running the fund. The former is vastly safer and should be the only way that anyone ever owns remotely stored precious metals, including cryptos.

Precious metal cryptos might engage some of the animal spirits that have been driving the bitcoin bull market — especially now that existing cryptos are correcting hard, thus reinforcing the lesson that these currencies aren’t backed by anything real. It’s possible that the contrast between bitcoin and crypto-gold will become a major topic of conversation in 2018, with the latter looking good by comparison and attracting serious speculative cash.

It turns out that there are already a number of gold-backed cryptocurrencies out there. Here’s a list compiled by GoldScape:

Gold-Backed Cryptocurrency Directory
This is a current list of gold-backed cryptocurrency. This is a directory and not an editorial endorsement, so research all of the alternatives before investing. Some of the cryptocurrencies listed here don’t detail how they store and account for gold either, so proceed with caution. Any questions regarding each coin should be referred to their social media channel or forum listing.

Since this post was first published there have been new coins added to the list and some are now ready to buy. The list is now sorted in order of availability.

Flashmoni (OZT)
Location: UK
Website: flashmoni.io
Flashmoni is a blockchain-powered fintech company that offers a physical gold-pegged cryptocurrency, innovative payment solutions and a smart contract-based advertising solution. In addition to using gold to back their tokens, they also plan to raise funds to directly operate mines to “improve miner’s working conditions, their lives and of the communities where they live.”

There are two gold-backed tokens: OZG which is a private token pegged with 24 K gold stored in Dubai’s DMCC Free Zone and in Singapore. 1 OZG = 1 grain of gold (1 grain is approx 0.065 gram). OZT is the public token tradable on crypto exchanges and OZTs core value is 1/20th of the OZG.

AuX tokens by GoldCrypto are a cryptocurrency backed by physical gold. Currently, each 750 AuX Tokens will be backed by one ounce of gold (approximately US$1.70 per AuX Token). This gold backing per AuX Token then progressively increases.

Gold Bits Coin is a gold-backed crypto but the site and White Paper is light on details. It says that each coin is “backed by real gold”, but it doesn’t say how much gold is in each coin, or how it is stored. Gold Bits Coin Pre-ICO is on until 31 January 2018.

XGold Coin (XGC) is a gold backed digital crypto-currency option. The price of one XGC Coin at initial pricing is based on a single gram of Gold. PRE-ICO First Round is on until 10 February 2018 and is offering a Pre-ICO 35% bonus.

Puregold is a payment gateway using Gold backed cryptocurrency. They offer two digital tokens called PGT for transactions; and PGG which is a cryptoasset backed by physical gold. The company uses physical gold (of 999.9 quality) as its security. Puregold’s gold reserves equal or exceed its circulated amounts of PGG gold-backed tokens. The physical gold is stored by a third party in a decentralized storage unit that Puregold stores investment grade gold, gold jewellery, small ingots (up to 100 grams) and coins. Puregold is part of Puregold.sg, which is a private mint in Singapore with its own in-house factory producing gold and bars. The ICO for Puregold runs from 15 January 2018 to 14 March 2018

Reales coin is a token that combines a basket of precious metal and cryptocurrencies. The breakdown of each token is 10% physical gold, 35% physical silver, 20% Bitcoin, and 20% for ICO’s and alt-coins (total 85%). The remaining 10% is for company’s budget and 5% for operational costs. Reales ICO ends 8 March, 2018.

Icing on the cake

The forces driving precious metals higher (out-of-control credit creation pretty much everywhere, geopolitical chaos in much of the world, bond and stock bubbles that should, if history still matters, burst shortly, and the looming mass devaluation of fiat currencies) are already nothing short of spectacular. So gold and silver don’t need the blockchain to be big winners in the next few years.

Still, the number of gold-related blockchain products is apparently going to soar in 2018 as the big gold players stake their claims. The result? A potentially significant jump in demand for physical gold as all these promoters acquire metal to back their offerings. So while gold is likely to soar in any event, the blockchain connection might be a big help. Think of it as icing on an already tasty cake.