"I don’t have the evidence,” Mattis said. “What I am saying is that other groups on the ground - NGOs, fighters on the ground - have said that sarin has been used, so we are looking for evidence.”

This week the American public was once again bombarded by fresh headlines alleging the Syrian government under President Bashar al-Assad gassed its own people. And in predictable fashion the usual threat of US military force soon followed.

Except of course rather than "alleging" a chemical incident, all the usual suspects from CNN pundits to State Department bureaucrats to Pentagon officials in typical fashion are opting for the simpler "Assad did it" narrative. State Department spokesperson Heather Nauert stated Thursday, "Russia is making the wrong choice by not exercising its unique influence. To allow the Syria regime to use chemical weapons against its own people is unconscionable. We will pursue accountability." 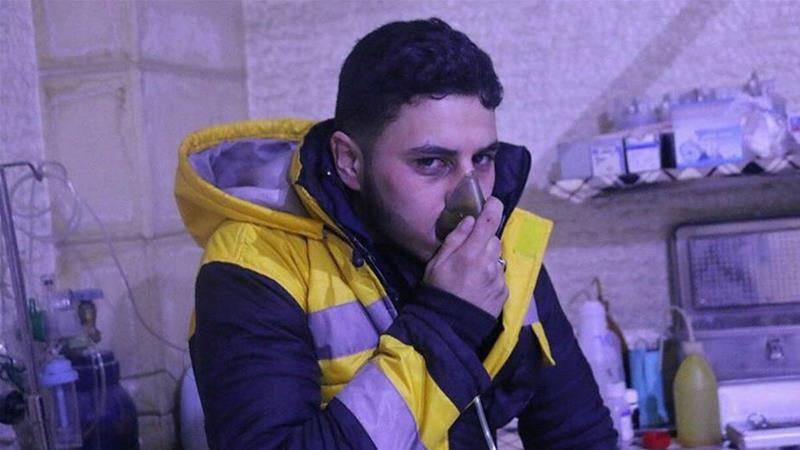 The White Helmets published this photo on Thursday, claiming that its "volunteer was suffocated by the chlorine gas attack". It appears that this is the "NGO" Defense Secretary Jim Mattis referenced on Friday to say "open sources" say Assad is using chemical weapons.

Nauert's statement was a repeat of talking points from last week's chemical attack claims, wherein both she and Secretary of State Rex Tillerson ultimately blamed Russia. But like with other recent chemical attack allegations, the claims couldn't be more vague or poorly sourced, yet was still enough for U.S. officials to issue more direct threats of US military action against Assad.

While addressing the prior East Ghouta incident during a talk on January 23rd, Tillerson let slip that he didn't actually know much about the supposed earlier January attack at all while still putting blame squarely on Syria and Russia, saying at the time, "Whoever conducted the attacks Russia ultimately bears responsibility for the victims in eastern Ghouta and countless other Syrians targeted with chemical weapons since Russia became involved in Syria."

This week the "evidence" doesn't appear to be any clearer or narrowed.

On Friday Defense Secretary Jim Mattis addressed the latest claims, confidently asserting the Syrian government had as a matter of routine used chlorine as a weapon against the remaining pockets of opposition areas of the country - specifically in the Damascus suburb of East Ghouta, but it appears at this point that even Reuters has suddenly found its journalistic skepticism... Yes, actual knowledge on whether or not there was even a chemical attack to begin with is indeed thin enough for Reuters to headline its own report with "Mattis says has no evidence of sarin gas used in Syria, but concerned".

Mattis, in line with the rest of the administration - especially the State Department - did his best to paint a scenario of the case being all but certain that the Syrian Army has been using chlorine gas to attack civilians, while also suggesting Sarin may have been deployed as well, which could serve as a "red line" triggering US military attack on the Syrian government.

But Mattis was also forced to admit the following, according to Reuters:

Mattis, speaking with reporters, said the Syrian government had repeatedly used chlorine as a weapon. He stressed that the United States did not have evidence of sarin gas use.

“We are even more concerned about the possibility of sarin use, (but) I don’t have the evidence,” Mattis said. “What I am saying is that other groups on the ground - NGOs, fighters on the ground - have said that sarin has been used, so we are looking for evidence.”

And according to CNN, Mattis is now merely going on "open source" information, which essentially means anything from media reports to YouTube to Twitter to mere "opposition sources say...". CNN reports the following:

"You have all seen how we reacted to that [referencing the April 2017 US airstrike], so they'd be ill advised to go back to violating the chemical convention"... Mattis acknowledged that the US has not seen direct evidence of the use of Sarin gas but pointed to open source reports. "I don't have the evidence... We are looking for evidence. I don't have evidence credible or uncredible."

Like with previous allegations, US government officials are issuing threats of military action based on NGO's and fighters on the ground.

Mattis acknowledged that the U.S. HAS NOT SEEN DIRECT EVIDENCE of the use of Sarin gas but pointed to open source reports"
Open source? Seriously?

In this case it once again appears to be the word of the White Helmets, which it seems just about every other week issue new and unverified claims of chemical weapons attacks by the Syrian government. As is now generally well-known the White Helmets are funded by US and UK governments to the tune of many tens of millions of dollars, and have further been frequently filmed and documented cooperating closely with al-Qaeda factions on the ground in Syria.

Indeed the group only operates in areas controlled by al-Qaeda (HTS) and other anti-government insurgents, especially in the locations of recent alleged attacks - Idlib and East Ghouta.

Now that unverified claims of chemical attack incidents in Syria (and their subsequent uncritical amplification by media and politicians) have become routine, the following somewhat obvious observations need to be recalled:

Sitting at my desk in Boston I have absolutely no direct insight into who used what weapon in Syria, so I don’t pretend to know. What I will say is Assad has strong incentives not to use chemical weapons again whereas regime change supporters have every incentive to say he did.

For its part, Russia alongside the Syrian government and other regional allies have long accused the US of blindly trusting opposition sources inside Syria concerning claims of chemical weapons attacks, including the April 2017 incident in al-Qaeda controlled (HTS) Idlib, which resulted in the US attacking an airbase in central Syria.

Last October, the US State Department admitted that anti-Assad militant groups operating in Syria, especially in Idlib, possess and have used chemical weapons throughout the war - something which the US government previously said was impossible, as it consistently held the position that only the Assad government could be to blame.