Rents Increase In 89% Of Largest US Cities

The number of US renters is growing much more rapidly than the number of homeowners, so it shouldn't come as a surprise that rents in the vast majority of American cities climbed again last month - continuing a trend that has largely persisted since the financial crisis, according to data compiled by RentCafe, a website that provides rental listings nationwide. RentCafe occasionally analyzes the reams of data it collects to provide insightful clues about the US housing market. And as markets puked following a robust headline increase in average hourly earnings - one of the first signs that stagnant consumer prices might once again rise - RC's latest report shows that the national average rent was $1,361, 2.8% higher than this time last year, but flat on a monthly basis.

Nearly 90% of the nation’s biggest cities have seen rents grow in January; in 9% of cities rents remained unchanged, while only 2% experienced price declines...

Contrary to the conventional wisdom, it was actually America's smaller cities that saw the greatest increases (to be sure, that's probably because markets like San Francisco are already well past the boundaries of what typical middle-class workers can afford). These markets include Gilbert, AZ rose 8.5%, Roseville, CA (8.5%), and Fort Collins, CO (7.9%) breaking the top 10.

Meanwhile, in a sign that some of the hottest housing markets in the country are starting to buckle under the weight of overdevelopment, RC found that the only major market where rents dropped year-over-year was Brooklyn, where rents decreased by 14%.

The price of apartments has gone up in 89% of the nation’s 250 largest cities in January 2018, as demand for rentals remains elevated throughout the country, sustained by an improving economy and low unemployment. Renters continue to embrace apartment life, as rent prices are increasing at a strong and steady annual rate of 2.8%, nationwide, reaching $1,361/month in January 2018.

The price of two-bedroom units is increasing the fastest

One and two-bedroom apartments remain the most in-demand apartment sizes in the U.S. The price of two-bedroom rentals has climbed the most over the year, with a 3.5% increase in rates, exceeding $1,400/month on average, while the price for one-bedroom units has increased by 3.4%, renting for $1,225/month on average in January. The slowest growing apartment type in January were studio apartments, renting for 2.5% more than this time last year.

Rents in 6 cities, including Brooklyn, NY, continue to slide

In only six cities out of the 250 studied are rents cheaper than they were one year ago. With a large new inventory of apartments to fill, the rental market in Lubbock, TX has seen the biggest drop in prices year over year, -6.3%, with an average apartment now renting for less than $900/month. Norman, OK is also seeing a slight decrease in the average rent (-2.3%), as a result of thousands of new apartments hitting the market in just the past few years, with an average rent of $861/month as of January 2018.

Diminished demand for housing has affected prices in McAllen, TX, which have declined by -2.2% year-over-year. Rents in Kansas City, KS and Baton Rouge, LA are also sliding slightly this month, by less than 2%. The only large market to see a decrease in rents is Brooklyn, NY, which had wrapped up last year -1.7% below the previous year’s levels, maintaining the downward direction in January as well, with rents down by -1.1% year over year.

At the beginning of the year, we have three new cities entering the top 10 for fastest growing rents in the U.S. Fueled by increasing demand, Gilbert, AZ (8.5%), Roseville, CA (8.5%) and Fort Collins, CO (7.9%) saw big rent bumps over the past year. Rental prices in Gilbert, AZ are rising fast, clocking in at $1,156/month in January, as its population has been growing at extremely high rates, demand for housing has skyrocketed, and a big portion of the Gilbert population is renting.

Sacramento Metropolitan Area’s City of Roseville is joining Sacramento — where apartment prices have been on a steep climb for a while now — as one of the top 10 cities in the country with the fastest rising rents. The price of apartments in Roseville, CA has jumped by as much as 8.5% year-over-year, with the average rent currently exceeding $1,600/month. Fort Collins, CO has also become one of the country’s fastest growing rental markets, with residents and Colorado State students competing for a limited number of rental apartments. Rates are up almost 8% from the same time last year, a Fort Collins rental apartment costing on average $1,436/month at the moment.

Oil centers Odessa and Midland, TX are still at the top of the list with the highest rent rebounds over the year, 35% and 31.4% respectively. Buffalo, NY (12.1%) and Lancaster, CA (10.2%) also struggling with double-digit price hikes year-over-year.

U.S. Cities with the Fastest Growing Rents in January 2018 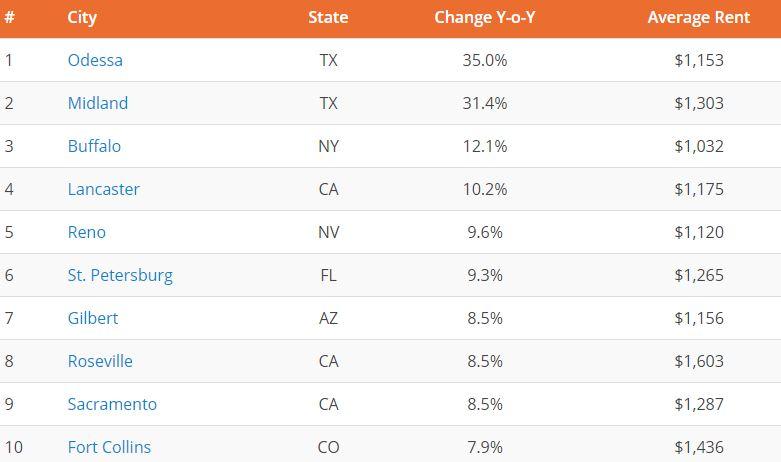 The most expensive California rents push the limits again in January

The priciest cities for renters remain big urban job centers on both coasts, with Manhattan, NY at the top of the list with an average apartment rent of $4,079, unchanged from the previous month and down slightly by -1% over the year.

If renters living in The Golden State where hoping for a respite from high rents in the new year, they’re not getting it yet. Prices went up again in January in all 5 California cities in the top 10 most expensive for renters, with the highest rates in the state being in San Francisco, $3,448/month. Jersey City apartments, the sixth most expensive in the U.S., also saw increased rates this month, reaching $2,855.

Wichita, KS, Tulsa, OK, and Toledo, OH remain the country’s top 3 most affordable cities for renters, alongside 7 other Midwestern and Texan towns where average rents do not exceed $730/month, a fraction of the prices in coastal cities. In fact, things have been quiet in these parts of the country, as rents remained flat or grew slower than the national average in 9 out of 10 cities. Fort Wayne, IN was the only one to see a significant jump in prices for the year, 4.5% 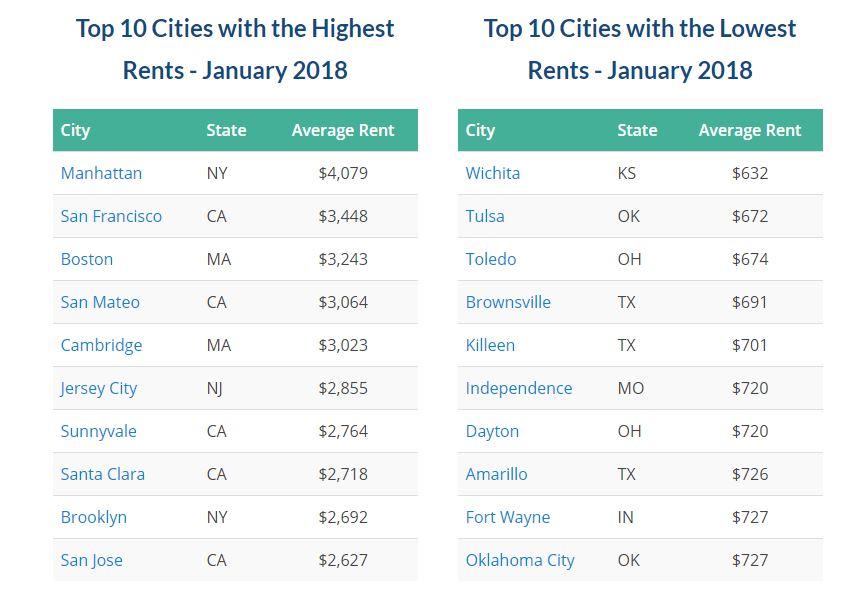 At the start of the new year, rents are expected to continue rising throughout the country slightly above inflation, as demand for apartments remains strong from all generations of renters. Doug Ressler, senior analyst at Yardi Matrix, offered his opinion as to what renters can expect as we begin a new year:

You can find the average rent in your city at RentCafe.