In the latest installment of the Pentagon’s preparation for the fast-approaching drone wars, a prototype autonomous ship known as the Medium Displacement Unmanned Surface Vehicle (MDUSV) has successfully been transferred to the United States Navy from the Defense Advanced Research Projects Agency (DARPA), after it completed its multi-year Anti-Submarine Warfare (ASW) Continuous Trail Unmanned Vessel (ACTUV) program. 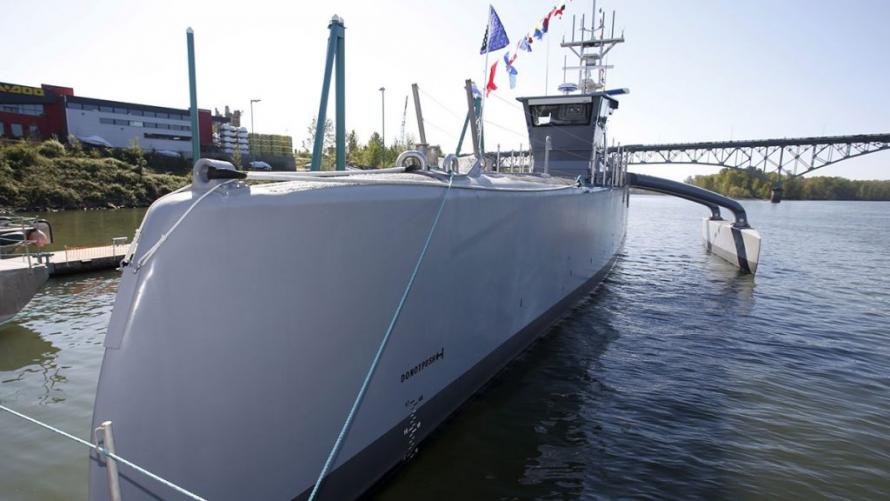 Christened as the “Sea Hunter,” the Office of Naval Research (ONR) will take the reins from DARPA in the development process, which the anti-submarine warfare vessel could be the first of an entirely new class of warship for the United States Navy. The vessel can travel thousands of miles and even stay at sea for months without the need of a manned crew.

“Our collaboration with ONR has brought closer to reality a future fleet in which both manned warships and capable large unmanned vessels complement each other to accomplish diverse, evolving missions,” Walan added.

“ONR appreciates the truly impressive work by DARPA in advancing this technology, and the strong partnership we’ve had on ACTUV over the years,” said Robert Brizzolara, ONR program officer for MDUSV.

“As ACTUV transfers from DARPA to ONR, ONR is looking forward to continuing and capitalizing on the science and technology work. In particular, we are already working on autonomous control, a challenging area that is key to maturing MDUSV and delivering it to the fleet,” he said.

“The U.S. military has talked about the strategic importance of replacing ‘king’ and ‘queen’ pieces on the maritime chessboard with lots of ‘pawns,’ and ACTUV is a first step toward doing exactly that,” he stated.

Newsweek outlines the cost benefits of the drone-ship and points out its strategic purpose of a “surveillance vehicle.”

The vessel comes at a relatively cheap $20 million prospective price tag and takes only around $20,000 a day to run. This figure is less expensive than a crew-run ship and also nixes potential personnel risks when navigating dangerous missions, such as navigating a minefield. Without firepower onboard, the Sea Hunter is currently a surveillance vehicle. Its tests so far have revolved around how easily and autonomously the vessel can maneuver its 132-foot-long body, accelerate to speeds nearing 27 knots, and using use radar and cameras to spot other vessels.

Last month, General Mark Milley warned an audience at the Association of the United States Army’s Institute of Warfare event, that the United States must embrace artificial intelligence, robotics, and other emerging technologies immediately to maintain relevance on the ever so changing battlefield.

“I don’t know if artificial intelligence is going to mean robots and machines replace humanity… but I do know the quantum computing and some of the IT technologies that are out there today are so significant and can help you [with] rapid decision-making in complex decentralized environments - that if we don’t take advantage of that in things like the network—then we would be fools because others are moving out quickly on that,” Milley said.

“Every vehicle is going to have the capability to be robotic,” he said, stressing the importance of a vehicle’s flexibility in giving options to a commander on the front lines, giving him options without requiring different vehicles to be deployed. “He can estimate the situation, he can make a determination as to whether he wants this assault to be manned or unmanned,” Milley explained

As a whole, the Pentagon is racing against the clock to implement future combat systems of tomorrow into the military vehicles of today. Just take note, what is happening in the United States Navy with the new addition of "Sea Hunter," signals the modernization of America’s military will be through the adoption of autonomous vehicles. When the next major conflict breaks out, it is likely that machines will be on the front-lines waging an unemotional war against each other.