Senate Judiciary Committee Chairman Chuck Grassley's push to force the DOJ to open a criminal investigation into ex-British spy and "Trump dossier" author Christopher Steele is being met with resistance from the bureau, the latest sign that it doesn't want information about its relationship with Steele to be shared with the public.

Bloomberg reported Monday that Senate Judiciary Chairman Chuck Grassley criticized the FBI for blocking the release of key portions of a memo he wrote calling for a criminal investigation of Christopher Steele, the former British spy who compiled a dossier of unverified allegations on Donald Trump.

Grassley also released the memo in its redacted form to the press.

"Seeking transparency and cooperation should not be this challenging," Grassley said in a statement after posting a heavily redacted version of the criminal referral that he and GOP Senator Lindsey Graham of South Carolina sent to the Justice Department last month. "The government should not be blotting out information that it admits isn’t secret."

Grassley has been pursuing questions about the FBI’s reliance on Steele separately from House Intelligence Chairman Devin Nunes, the author of the four-page "FISA memo" that was released last week and inspired President Trump to declare that he has been "vindicated" by its findings.

Conservative lawmakers have demanded that President Trump fire Deputy AG Rod Rosenstein, the official responsible for supervising the Mueller probe - and some have even called for Mueller's firing. But others, including outgoing Congressman and House Oversight Committee Chairman Trey Gowdy, have said the revelations packaged in the memo wouldn't justify ending the Russia probe. 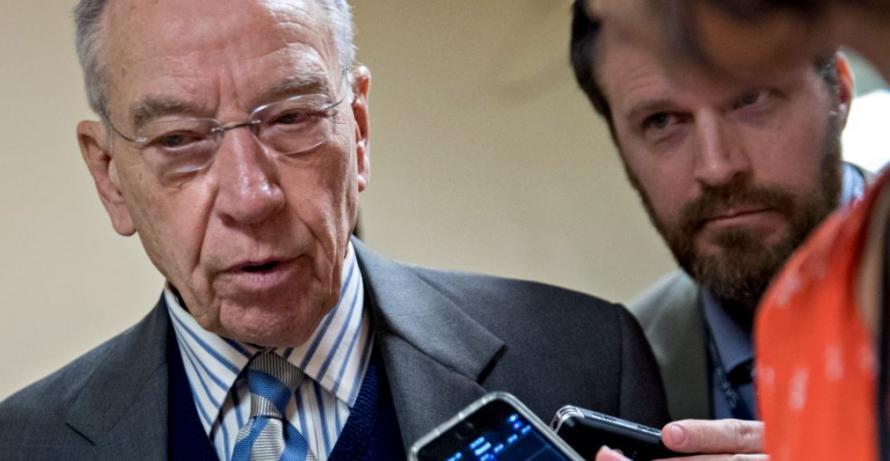 Grassley's push is emblematic of the intense rivalry that has sprung up between the various Congressional committees pursuing their own independent investigations of Trump and Hillary Clinton's relationships with Russian entities or officials.

Democrats have dismissed the memo as inaccurate and misleading and are pushing for release of their own document challenging the Republican account. The Intel Committee is set to meet Monday at 5 pm to decide on whether to release the memo. Washington time to vote on the possible release of the Democratic response.

As the rivalry between the White House and Republicans on one side, and the FBI and DOJ, on the other, accelerates, Grassley and Graham asked the DOJ to investigate whether Steele made false statements to federal investigators.

In the newly released memo, the pair wrote that they had sent the criminal referral because there’s evidence that Steele, whose opposition research was funded largely by Trump rival Hillary Clinton and the Democrats, either lied to the FBI or to a British court, or that classified documents reviewed by the committee are false.

As Bloomberg also notes, Grassley asked the FBI to approve a declassified version of his Steele referral by Tuesday.

Meanwhile, Politico reports that  Grassley and Graham on Monday also asked the Department of Justice and FBI to declassify more information related to their Steele referral, including an application to conduct surveillance of former Trump campaign adviser Carter Page.

That surveillance application, Republicans have said, improperly involved research conducted by Steele that was paid for by the Clinton campaign. Republicans on Friday released a declassified memo they wrote on the subject.

Suspiciously, the redacted letter includes a blacked-out section led by the sentence "there is substantial evidence suggesting that Mr. Steele materially misled the FBI about a key aspect of his dossier efforts, one which bears on his credibility."

Furthermore, a section on a second memo by Steele says he received information from the State Department, which in turn got it from a foreign source who was in touch with “a friend of the Clintons.”

"It is troubling enough that the Clinton Campaign funded Mr. Steele’s work, but that these Clinton associates were contemporaneously feeding Mr. Steele allegations raises additional concerns about his credibility," Grassley and Graham wrote in their criminal referral.