Ray Dalio Warns: Investors Just Got "A Taste Of What Tightening Will Be Like"

Echoing his recent comments on how investors' exposure to low interest rates is extreme and warned that a rise in yields could spark the biggest crisis for fixed-income investors in almost 40 years.

“A 1 percent rise in bond yields will produce the largest bear market in bonds that we have seen since 1980 to 1981," Bridgewater Associates founder Dalio said in a Bloomberg TV interview in Davos on Wednesday. We’re in a bear market, he said.

However, as we explained last December, this is a low-ball estimate which "understates the potential losses" as it "does not include high-yield bonds, fixed-rate mortgages, and fixed-income derivatives", which would suggest that the real number is likely more than double the estimated when taking into account all duration products.

As a reminder, Goldman calculated the entire duration universe at $40 trillion as of the summer of 2016, resulting in $2.4 trillion in losses for a 1% move. By now the number is far, far greater.

Bridgewater Founder Ray Dalio warns today, Via LinkedIn.com, what we are seeing is typical late-cycle behavior, though more exaggerated because the durations of investment assets (i.e., their sensitivities to interest rate changes) are greater.

Over the past week or so, we had reports of strong growth and rising wages (good things!), which sent bonds and stocks down (bad for most investors) due to justifiable fears that the Fed will tighten faster than is priced in the credit markets.

The surge in growth and wages came because of both the fiscal stimulation and the rekindling of animal spirits, thrusting the economy into late-cycle capacity constraints, which is leading to the expectations of faster Fed tightening.

In other words, fiscal stimulation is hitting the gas, which is driving the economy forward into the capacity constraints, which is triggering interest rate increases that are hitting the brakes, first in the markets and later in the economy.

This confluence of circumstances will make it difficult for the Fed to get monetary policy exactly right.

To be clear, we are not claiming to be smart about this.  In fact, the opposite is true, as this is happening sooner than we expected.  Still, these big declines are just minor corrections in the scope of things (see charts of stocks and bonds below), there is a lot of cash on the side to buy on the break, and what comes next will be most important. 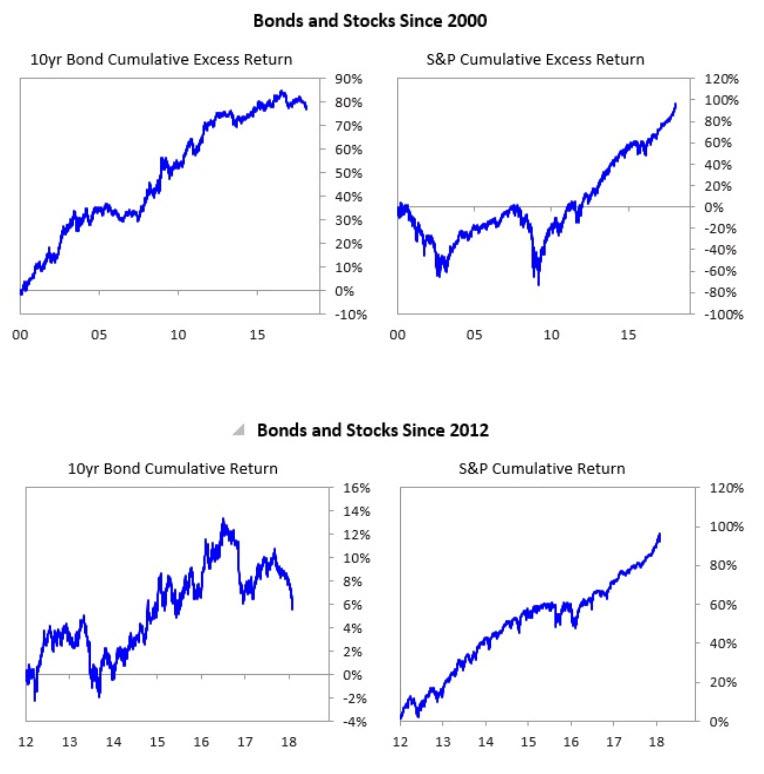 As shown, the recent price declines are not even noticeable within context of the bigger and longer term picture.

So it seems Dalio continues to suggest those holding cash are idiots, keep calm and carry on.