Tesla is deeply indebted to the US government, and the governments of many European nations, that have helped bolster sales of electric vehicles with attractive tax incentives. The importance of these handouts to Tesla's bottom line cannot be understated, as investors reminded us back in November, when reports that the GOP tax plan would eliminate the US electric-car credit sent Tesla shares spiraling to their worst daily drop ever, a day after the company announced its worst quarterly performance history (Tesla will report results for the October through December period later this week).

So it shouldn't come as a surprise that, after Hong Kong last year decided to remove its full registration tax waiver on electric cars for private use, Tesla is threatening to shutter its operations in the city unless its administrator, Carrie Lam Cheng Yuet-ngor, revives the waiver.

By reinstating registration taxes on electric vehicles, the city's government forced buyers to pay as much as 80% more for high-end models like the Tesla, according to the South China Morning Post.

The decline in sales was staggering: After 2,078 new electric vehicles were registered between April and December 2016, that number dropped to 99 last year - though reports that the waiver could be reinstated helped sales rebound in March.

With the tax waiver capped at HK$97,500 from April 1 last year, sales of electric cars nosedived. Only 99 new cars were registered from April to December last year, compared with 2,078 in the same period the year before.

Sales at Tesla, which employs 200 people in the city, were hit hardest. It sold 32 cars from April to December, although 2,939 cars were snapped up in March, as buyers rushed to its showrooms after Financial Secretary Paul Chan Mo-po’s announcement that the waiver was ending in last year’s budget.

An average of 230 Teslas were sold each month from April 2016 to February 2017, mostly of the Model S, the top-selling sedan in the city in 2015. To the excitement of consumers, the car also featured on ride-sharing app Uber.

“Scaling down Tesla’s operation in Hong Kong is a natural and logical consequence if the number of customers has dwindled prompted by a reduction of government incentives,” the source said. “Without government support, who is ­willing to invest in green technology?”

Asked for its comments, Tesla told the Post on Sunday: “Our launch in Hong Kong in 2010 was one of Tesla’s earliest, and we remain committed to our customers here, affirming that commitment with the opening of our second Service Centre last year.

"We remain hopeful that the government will continue to encourage more electric vehicles on the road and preserve Hong Kong’s lead in clean, sustainable living."

According to the SCMP, industry sources said that big manufacturers have urged Chan to remove the full tax waiver for electric cars because they were threatened by their rapid growth in the city, especially of Tesla, which dominated about 90% of the market. BMW, Nissan, Volkswagen and Renault also sell electric cars in the city.

"The sale of Tesla cars in one month was equal to the annual sales figure of some petrol car brands," the source said. "They all complained that the rapid growth of Tesla these few years had made their lives really difficult."

Tara Joseph, president of the American Chamber of Commerce in Hong Kong, said the chamber was “puzzled” by the city's policy change, reminding the government that green technology firms like Tesla require "policy transparency" to operate efficiently.

Musk caught a break back in November when Norway - a crucial market for Tesla - announced it had abandoned plans to impose the so-called "Tesla tax" which would've tacked on a more than $100,000 levy to sales of electric vehicles weighing over 2 tons - a group that would pretty much only include Tesla.

Circling back to Hong Kong, a spokesperson for the city's government told the SCMP that in deciding on tax ­concessions for EVs last year, the government had considered the narrowing price difference ­between electric cars and fuel engine models, and "its public transport-oriented policy".

is ­prepared to reduce its Hong Kong operations if the government fails to give residents incentives to buy battery-powered cars in its ­upcoming budget.

This is only the latest setback for Musk and Tesla, which have staggered from one embarrassment to the next over the past six months as production of Tesla's Model 3 Sedan has progressed much more slowly than Musk had promised his customers, some of whom submitted preorder payments for the Model 3 nearly 2 years ago.

We'll see how this dropoff impacts Tesla's earnings, which are due out Wednesday. Investors will be watching to see if the company's trend of burning through increasingly obscene amounts of cash continued through the end of 2017. 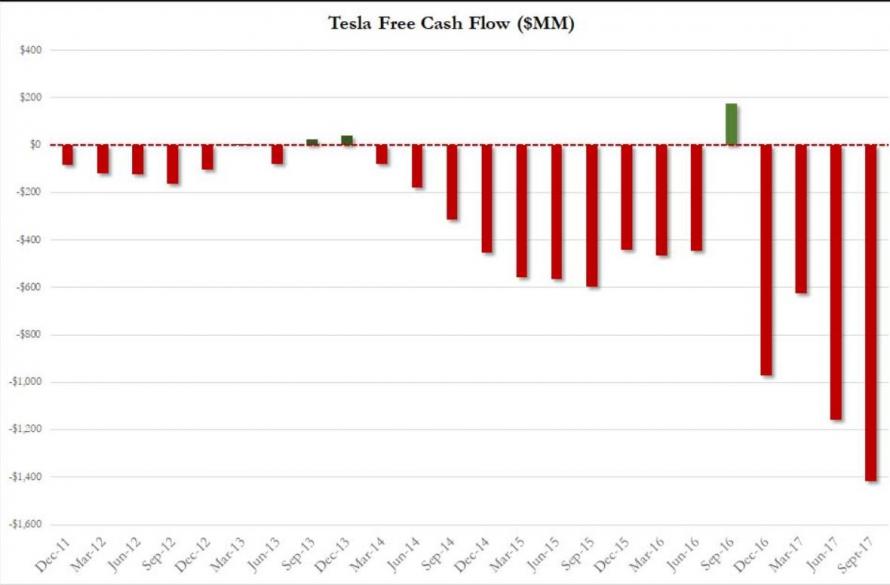