The specified file public://inline-images/https_%2F%2Fs3-us-west-2.amazonaws.png could not be moved/copied because no file by that name exists. Please check that you supplied the correct filename.

The Foolishness Of Trump's Steel Tariffs In One Simple Chart

Trump wants to save steel-related jobs.

Our Steel and Aluminum industries (and many others) have been decimated by decades of unfair trade and bad policy with countries from around the world. We must not let our country, companies and workers be taken advantage of any longer. We want free, fair and SMART TRADE!

However, the jobs are gone and will never return. NAFTA has nothing to do with it. 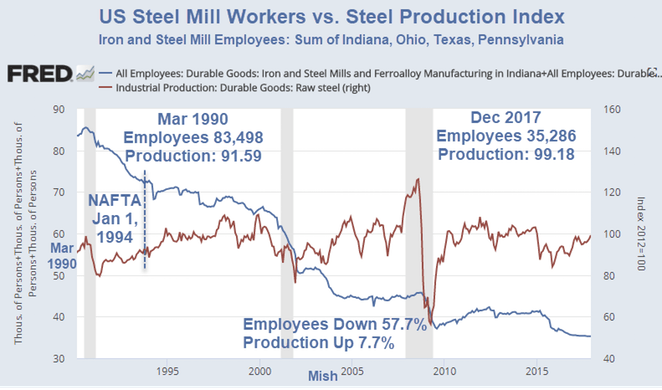 I created that Chart in Fred by totalling steel workers in Indiana, Ohio, Texas, and Pennsylvania. Those are the only states tracked now. If there were more states tracked in 1990, the decline in workers is even greater. There is production in other states but it is minimal.

The fact of the matter is US plants are aging dinosaurs compared to China's. China invested in modernized plants, the US didn't.

Before anyone bitches about subsidies, please take a look at US subsidies in the aerospace sector from absurd defense spending contracts.

The US cannot compete with sugar production from countries like Brazil where cane grows better, so we have sugar tariffs. As a direct result of sugar tariffs, US candy production went overseas.

US crop subsidies support excess corn production which we dump on the rest of the world. Still, we have tariffs on ethanol from Brazil because it is cheaper to make ethanol from sugar cane than corn.

The US and EU are the worst offenders when it comes to agriculture. Global trade talks break down every year over US and EU agricultural policies.

It's easy to criticize China over steel because no one hears third world complaints against the US on agricultural policy.

The bottom line is simple: If its good for the consumer, it's good policy.

Instead, Trump is promoting trade wars that mathematically cannot be won.

Trump's trade policies are set to exacerbate the next global recession, but economic illiterates are egging him on.

It's economic and mathematical madness.