The specified file public://inline-images/https_%2F%2Fs3-us-west-2.amazonaws_1.jpg could not be moved/copied because no file by that name exists. Please check that you supplied the correct filename.

Sucker Traps & The Arithmetic Of Risk

John Hussman has another excellent article out this week but it will be ignored. Mathematically, it must be ignored. 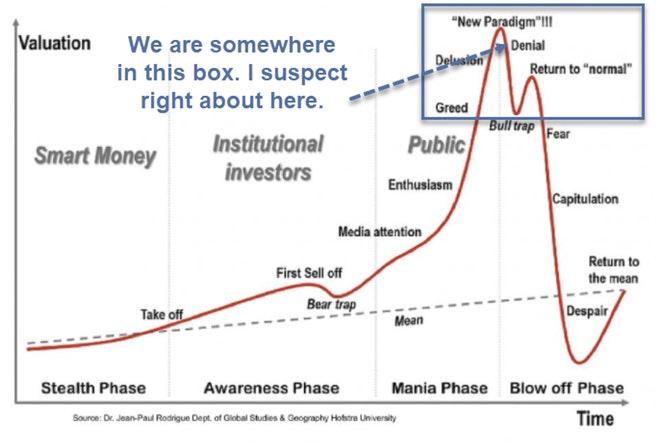 In the Arithmetic of Risk, Hussman posted the above chart. I added the anecdotes regarding where we are. Here are some pertinent snips.​

The collapse of major bubbles is often preceded by the collapse of smaller bubbles representing ‘fringe’ speculations. Those early wipeouts are canaries in the coalmine. Once investor preferences shift from speculation toward risk-aversion, extreme valuations should not be ignored, and can suddenly matter to their full extent.

At present, I view the market as a “broken parabola” – much the same as we observed for the Nikkei in 1990, the Nasdaq in 2000, or for those wishing a more recent example, Bitcoin since January.

Two features of the initial break from speculative bubbles are worth noting. First, the collapse of major bubbles is often preceded by the collapse of smaller bubbles representing “fringe” speculations. Those early wipeouts are canaries in the coalmine.

In July 2007, two Bear Stearns hedge funds heavily invested in sub-prime loans suddenly became nearly worthless. Yet that was nearly three months before the S&P 500 peaked in October, followed by a collapse that would take it down by more than 55%.

Observing the sudden collapses of fringe bubbles today, including inverse volatility funds and Bitcoin, my impression is that we’re actually seeing the early signs of risk-aversion and selectivity among investors. The speculation in Bitcoin, despite issues of scalability and breathtaking inefficiency, was striking enough. But the willingness of investors to short market volatility even at 9% was mathematically disturbing.

See, volatility is measured by the “standard deviation” of returns, which describes the spread of a bell curve, and can never become negative. Moreover, standard deviation is annualized by multiplying by the square root of time. An annual volatility of 9% implies a daily volatilty of about 0.6%, which is like saying that a 2% market decline should occur in fewer than 1 in 2000 trading sessions, when in fact they’ve historically occurred about 1 in 50. The spectacle of investors eagerly shorting a volatility index (VIX) of 9, in expectation that it would go lower, wasn’t just a sideshow in some esoteric security. It was the sign of a market that had come to believe that stock prices could do nothing but advance, and could be expected to do so in an uncorrected diagonal line.

I continue to expect the S&P 500 to lose about two-thirds of its value over the completion of the current market cycle. With market internals now unfavorable, following the most offensive “overvalued, overbought, overbullish” combination of market conditions on record, our market outlook has shifted to hard-negative. Rather than forecasting how long present conditions may persist, I believe it’s enough to align ourselves with prevailing market conditions, and shift our outlook as those conditions shift.

Recall that the S&P 500 registered negative total returns for a buy-and-hold strategy during the nearly 12-year period from March 2000 until November 2011. I expect a similar consequence to emerge from current extremes.

You’ll often hear risk being equated with return on financial television. The proposition takes various forms. “Higher risk means higher return” or “Well, you can only expect higher returns by taking more risk.” In my view, the idea that higher risk means higher expected return is one of the most dangerous and misunderstood propositions in the financial markets. The reason it’s dangerous is that it ignores the central condition: “provided that one is choosing between portfolios that all maximize expected return per unit of risk.”

See, one of the most conventional “risky” assets investors can choose is the S&P 500. But by our estimates, that asset is priced at a level that’s consistent with negative 10-12 year total returns. Given that expected return, the S&P 500 would be largely excluded from an “optimal portfolio” on that time horizon, unless there was something else in the portfolio with a very high expected return that was negatively correlated with the S&P 500 (in which case, the S&P 500 might be included in order to reduce portfolio volatility). Here and now, it’s very true that the S&P 500 is a risky asset, but it’s madness to imagine that adding more of it to a portfolio will increase expected return, except for investors with very long horizons.

Lost in the Pictures

I don't disagree with a word of that. And his images are excellent. But is the message lost in the pictures?

That's why I stripped out what I think are the key paragraphs on risk, volatility, bitcoin, and history.

Either way, Hussman wrote another excellent article. But it will be ignored. Mathematically his message must be ignored, in aggregate. Someone has to hold every stock and every bond, at the top and all the way down.

On an individual basis, however, there are choices. So think about those key paragraphs and act accordingly.