The Ravings Of A Lunatic Macro Trader?

They’re back. I thought they had all given up, but like an old college buddy who’s going through a bad divorce and just needs a place to crash for a ‘few days,’ the corporate credit skeptics are a tough lot to shake. 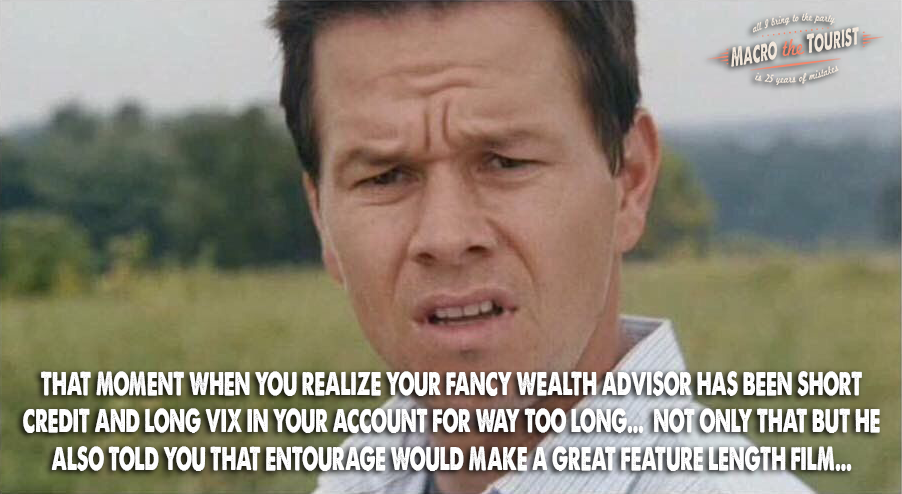 This crew is a left-over remnant of the 2008 Great Financial Crisis. After watching the global financial system implode in a crisis that threatened to topple the entire world economy, there is a group of market participants who believe the next dislocation is right around the corner - only this time will be even worse given the increased debt levels. Although their views can be nuanced, usually they believe the market stresses from the last crisis will simply replay in a more dramatic fashion. In 2008 stocks fell, credit spreads exploded higher, VIX shot to the moon and sovereign long-dated bonds were the best asset to own by a long shot. Therefore at the hint of any trouble, they skedaddle to put on whichever part of this trade is most in fashion.

Over the past few weeks, with concerns about higher rates rattling the markets, speculators have flocked to shorting corporate fixed-income. I have created a custom index that is comprised of the total short interest of the most popular corporate credit ETFs. 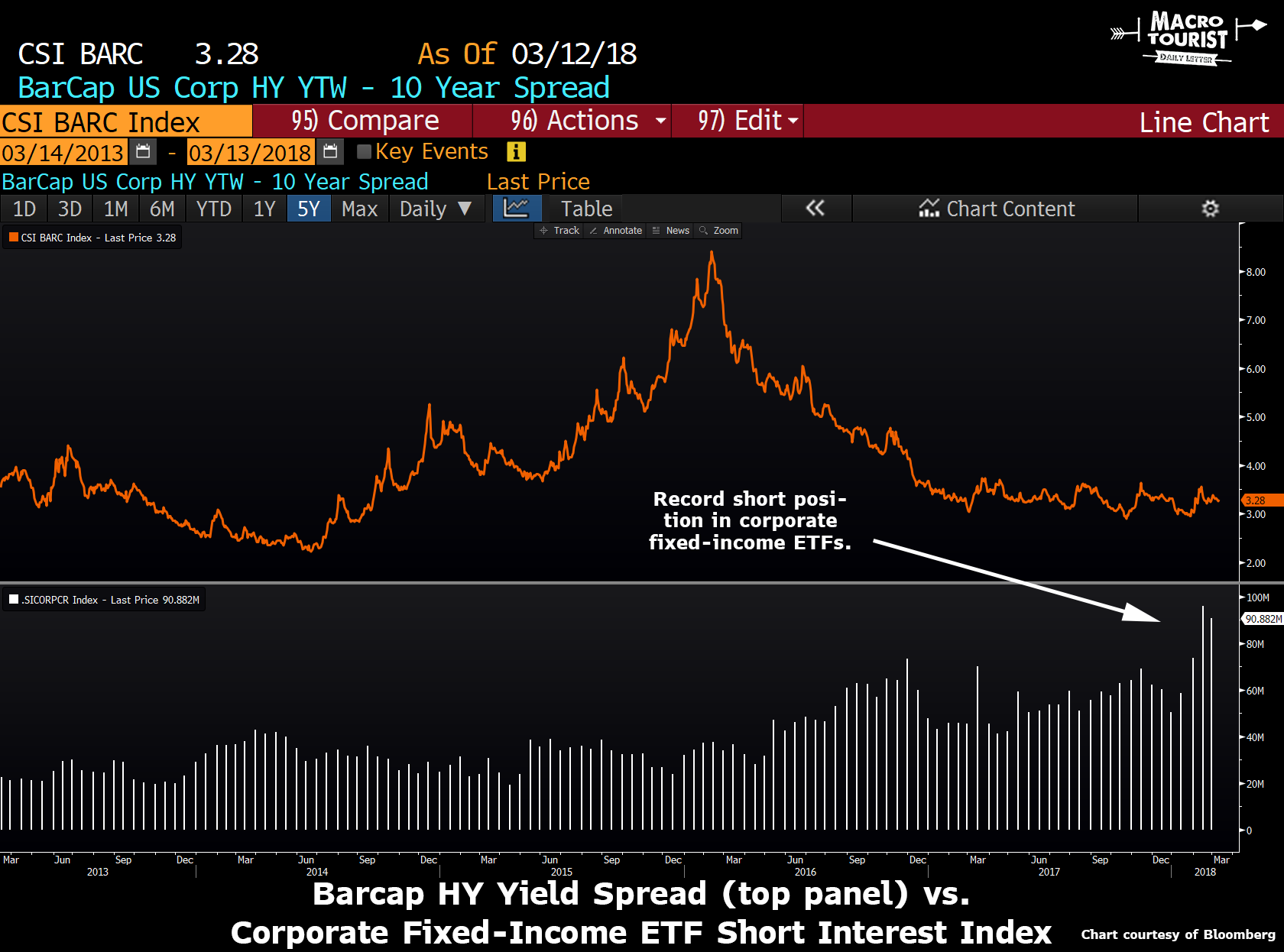 Last week the short position ticked at a record high.

The most interesting part of this development? Although speculators are leaning heavily against credit, the spread versus governments is barely moving. 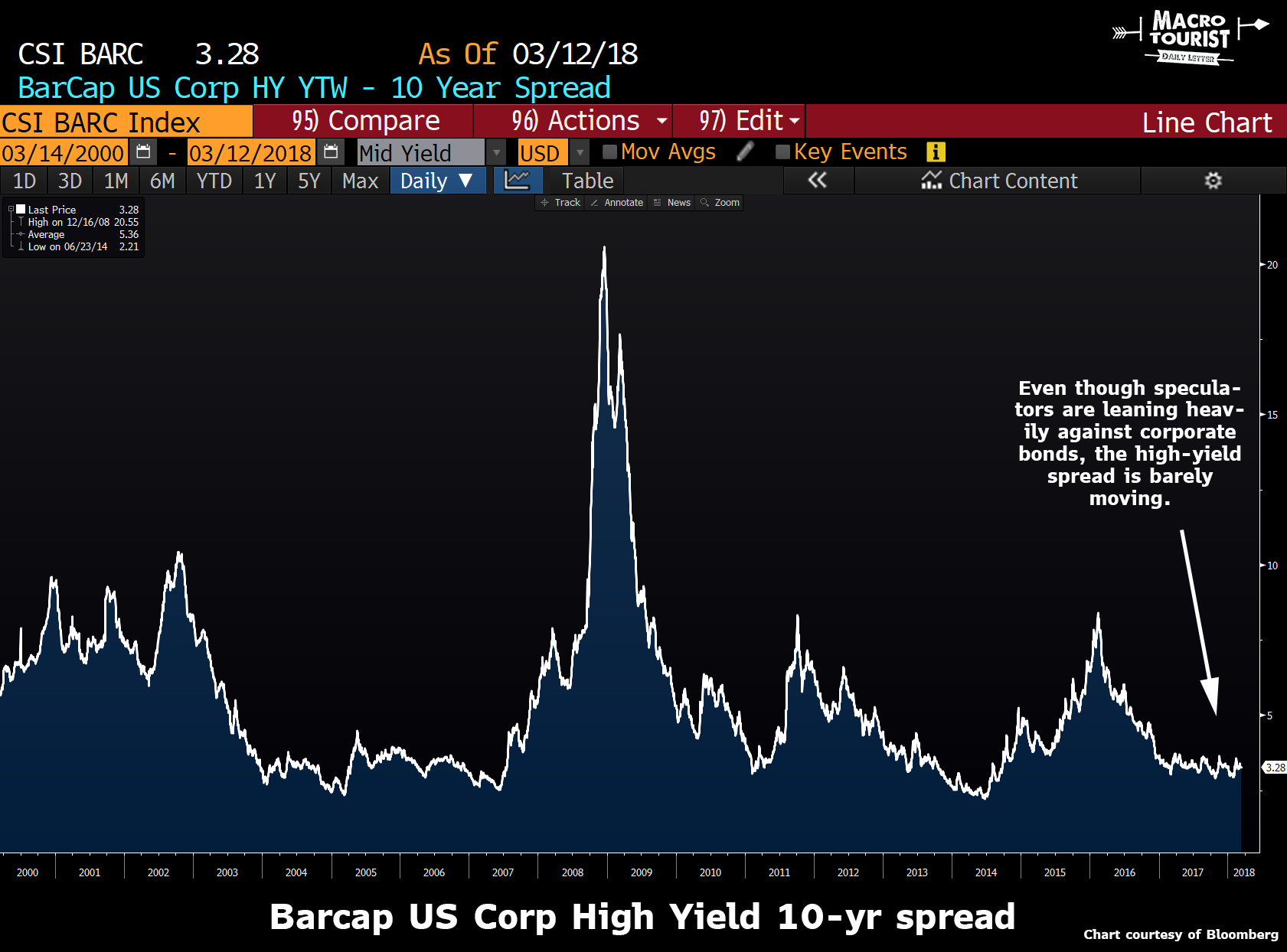 The fact that spreads are relatively stable means that most all of the recent decline in corporate bonds can be attributed to a rise in the “risk-free” rate and does not represent an increased worry about company specific credit.

Usually, I would write about positioning in the futures market, but since there is a not an easy way to trade corporate credit through futures, I will stay consistent and show the short position of government based fixed-income ETFs. This makes a much better comparison. 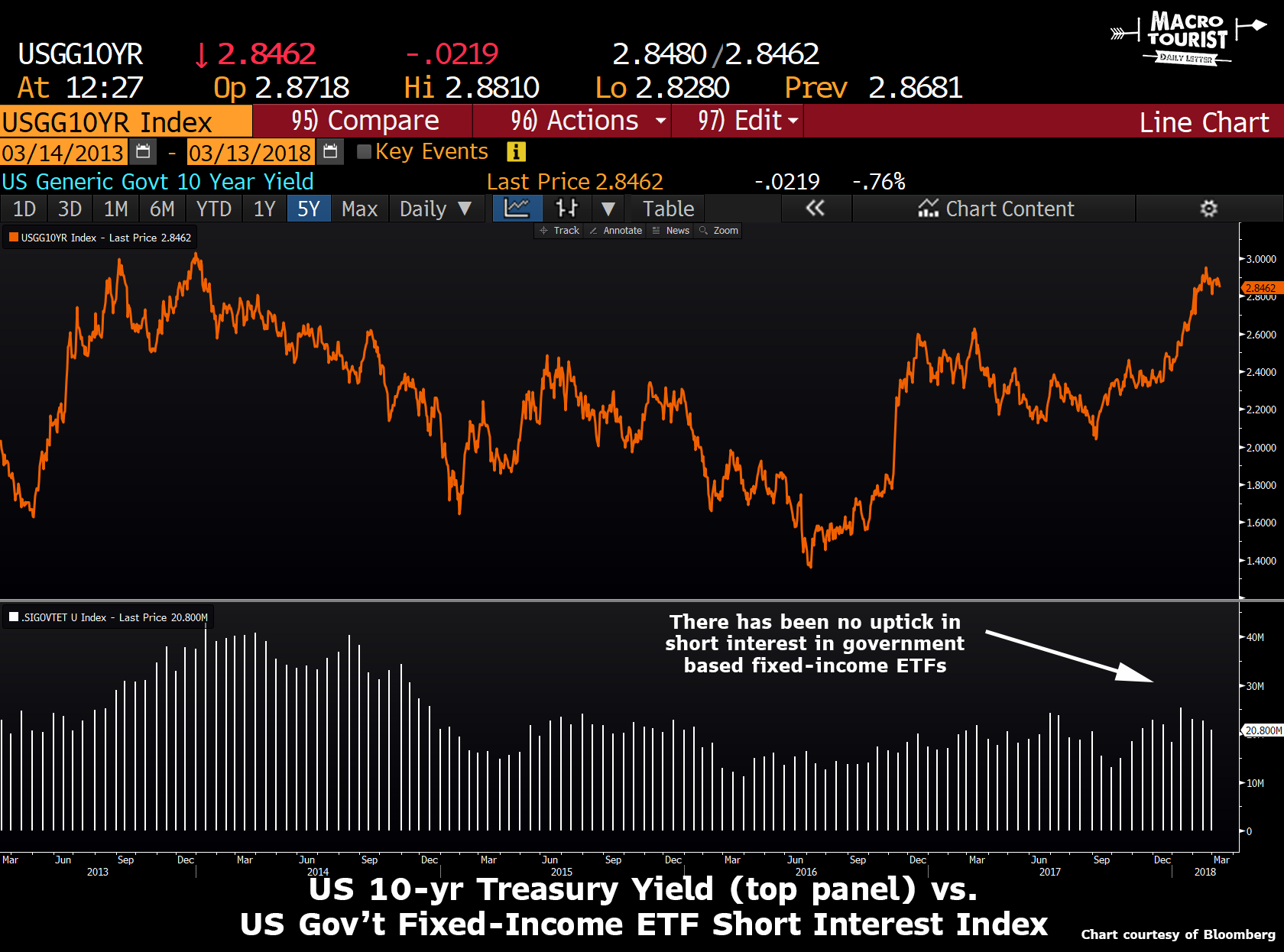 Ironic isn’t it? The decline in corporate bonds was almost solely the result of US treasuries selling off, yet speculators are leaning heavily on corporate bonds and have not increased the treasury index ETF short at all.

There is a bizarre phenomenon when people who lose a limb report sensations in their missing appendage. The experiences can even be painful. Well, markets sometimes suffer from their own version of phantom limb syndrome. Too many market participants remember the pain from the 2008 GFC and reflexively assume it will repeat. They rush to put on the same positions that benefited the most during that market crisis.

Well, I may not know much, but I know that markets seldom repeat, especially so quickly after the last crisis. Everyone hedges for the previous crash, and by definition, it means that the next dislocation will be different. After all, you don’t have surprises that everyone is expecting.

Could corporate spreads trade lower and even go negative?

This next part of my post might be difficult to accept. Many will simply write off the theory as the ravings of a lunatic.

But let me remind you of something. It used to be that everyone assumed swap rates could never go negative. Why would anyone ever accept a lower rate on a bank contract versus risk-free government sovereigns? Yet in the aftermath of the GFC, swap rates did the impossible and not only dipped below zero, but stayed there for years. 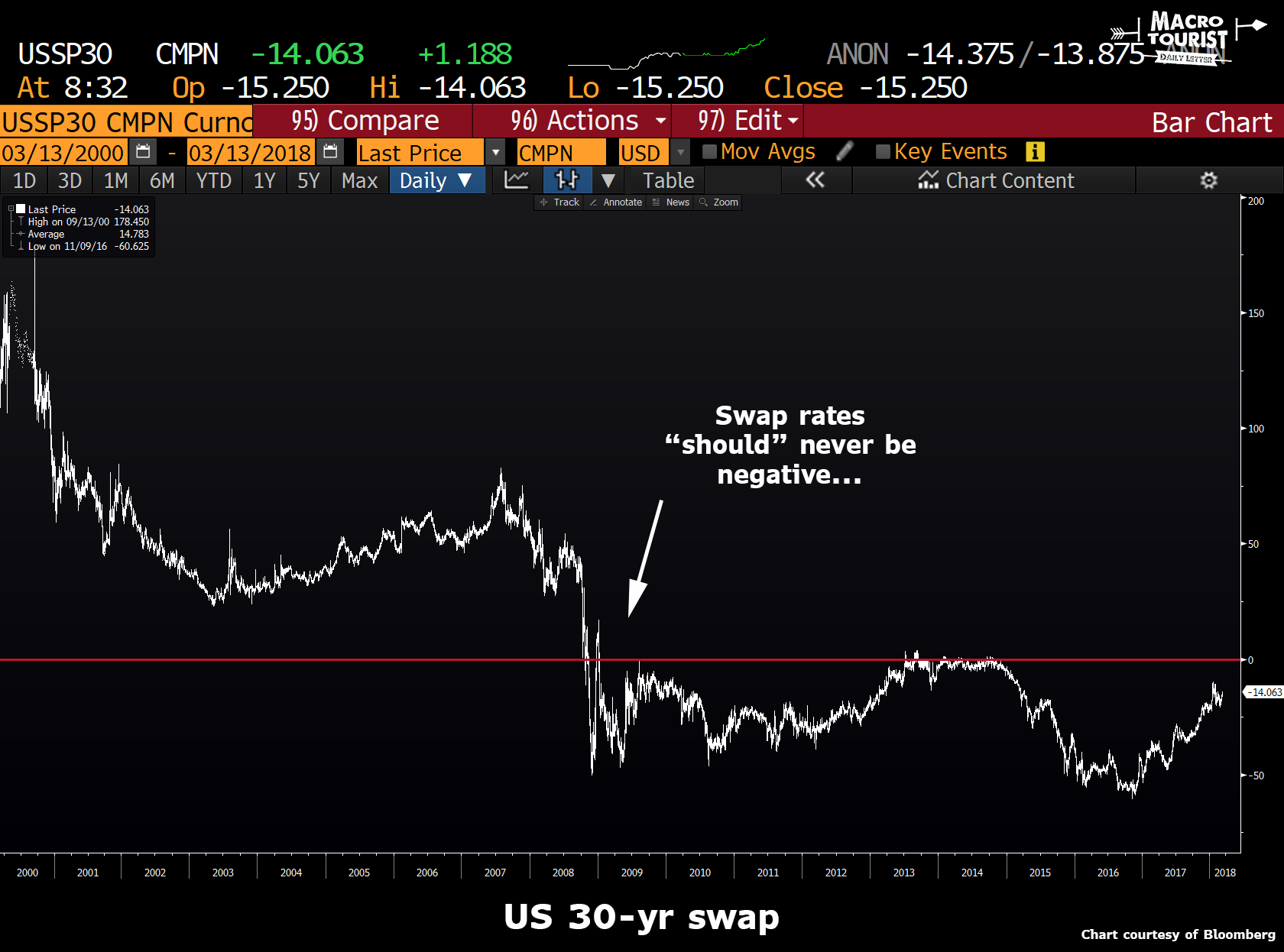 Perhaps even more astonishing than swap rates turning negative, who would have predicted a decade ago that sovereign rates themselves would trade with a minus sign in front of their yield? We have now accepted this abomination, but negative bond yields still boggle my mind.

Last night, as I thought about this post, I remembered an interview with a macro trader that I had read ages ago. This trader had a short position in Eurodollar futures, or some other short-term fixed-income instrument. He wanted to limit his risk, so he tried to buy call options (put option on yields) at a 0% rate. His counterparty thought he was nuts and was happy to sell him “worthless” options for something everyone “knew” couldn’t happen.

Well, I thought I read this interview in one of the Market Wizards books, yet I couldn’t find it. This morning, after an exhaustive search, I gave up, and threw it out to twitter for some help. The answer came back almost immediately. The reason I couldn’t find it in the Market Wizards books is that I had confused them with Steve Drobny’s “Inside the House of Money.” My copy of the Drobny book is at home, so I can’t grab the quote, but the trader in question is Jim Leitner, described as the greatest macro trader you have never heard of.

That book was written in 2006, before the GFC and well before negative rates. Traders laughed at Leitner, but he knew that anything can happen. His insight was sheer brilliance.

I don’t pretend to be even a quarter of the trader as Jim, but in my own Leitner-esque manner, I would like to remind everyone that credit spreads don’t have to be the source of the next crisis.

In fact, here is something to think about. Over the centuries, there have been plenty of sovereigns that have defaulted on their bonds. Risk-free sovereigns are not nearly as devoid of risk as many market participants believe.

Don’t forget, governments are the borrowers, but they are also the ones that set the rules. Although it’s easy to argue it’s not in their best interest to default on their bonds and increase their cost of funding, there reaches a level of indebtedness where the short-run consequences of a default are outweighed by the long-term gains from canceling debt.

Although recent history has seen relatively few sovereign defaults, history teaches us otherwise. From the Bank of Canada: 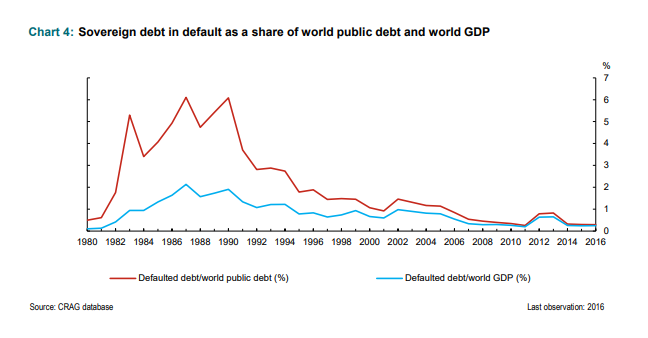 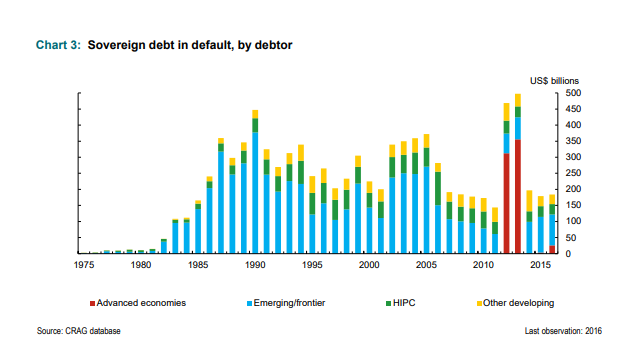 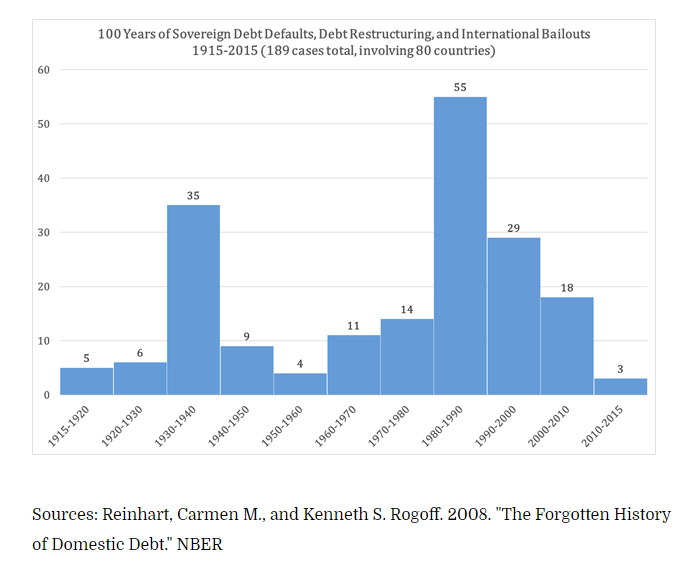 And finally, from the WSJ: 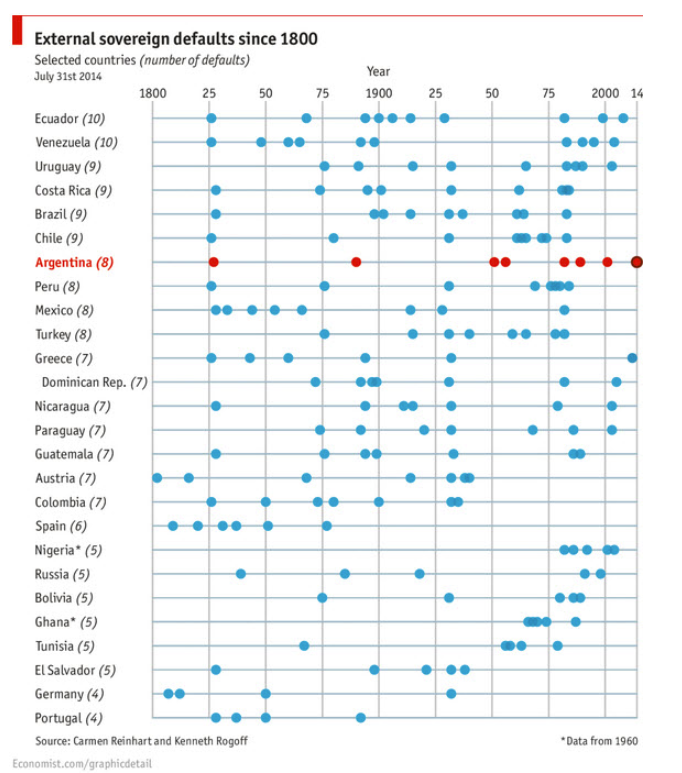 So if you are an endowment that is considering the credit worthiness of a sovereign issuer versus an AAA corporate borrower over the coming decades, is it really such an easy call that the corporate bond should yield more than the sovereign? The corporate creditor is backed by real assets whose security is enforceable by a third party. You might argue that the sovereign is also subject to rule of law that is held in check by the world’s court, but if you consider global government debt burdens, blindly assuming it will all be paid back without politicians testing the boundaries is naive.

So would you rather own Toyota or JGB paper? How about Eni or BTPs? I am not so sure that sovereigns should always yield less than corporates. Government finances are in a terrible bind. In a lot of cases, private corporations that have real assets, which will be able to maintain their value in an inflationary environment, might be a better bet than hoping governments live up to their promises.

In the coming years, I could easily envision a situation where stronger rated corporate credit curves trade through sovereign curves. I know that seems crazy, but don’t forget negative swap rates and absolute yields below zero were also theoretically impossible. Leitner would probably counsel us to expect the unexpected.

Putting it all together

With market participants leaning heavily short corporate credit, the chances of a big accident diminish. Crises always occur in something that just 'cannot happen'. Whether it is home prices can’t fall at a national level or the internet has changed the nature of investing, as Mark Twain reminds us, there is always something that everyone knows for sure that just ain’t so.

I find it funny that the most vocal critics about the spiralling upward out-of-control government debt are often those investors most likely advocating positions in long-dated sovereign bonds as a place to hide. The surprise of this cycle will be that risk-free sovereign bonds provide no safety against the next crisis, but will instead themselves be the source of the instability. Think about hedging against the unthinkable happening. That’s what Jim would do.