Following the 'good' news that G-20 will not be cracking down on cryptos, removing the FUD from the weekend, Bitcoin and its peers are extending gains after Bank of Japan's Governor Haruhiko Kuroda told reporters in Buenos Aires at the G-20 meeting of central bankers and finance ministers that "cryptocurrencies can be a plus for the financial system."

Additionally, Japanese interest in Bitcoin has been soaring. As Morgan Stanley notes, since 2013 there have been three major funding currencies for bitcoin – USD, CNY and
JPY.

The dataset of bitcoin prices from over 350 markets (exchanges or versus different trading currencies) largely covers fiat currencies. Only 10% of the markets are trading bitcoin versus other cryptocurrencies

However, in the past month, half of bitcoin trading on exchanges has been done versus the Japanese yen (JPY), with volumes much higher than those versus the US dollar (USD).

The Japanese retail community have long been active participants in the foreign exchange market, particularly via margin accounts. They tend to sell JPY and buy foreign currencies with high yields, leveraged up to 25x. Bitflyer, the largest bitcoin exchange in Japan, offers its clients up to 15x leverage but with volatility that is 10x that of USDJPY. Bitcoin trading volumes versus JPY in January were only around 2% of the margin FX trading account volumes. An appreciating JPY (as we expect) could move some of this margin trading volume onto cryptocurrencies. One risk to watch out for is if the Japanese financial regulator confirms that it will lower the FX trading leverage cap to 10x.

As a reminder, in case you were wondering,  here is why Kuroda wants a strong Bitcoin.

In December, BOJ governor Haruhiko Kuroda once again refused to slam the cryptocurrency as fraud, as so many of his peers have done, and instead merely expressed an opinion that current Bitcoin market movements were the result of speculative trading. He also commented that price movements were abnormal, even if clearly beneficial as the below analysis reveals.

In January, when Nomura analyst Yoshiyuki Suimon went the extra step of trying to quantify the actual profits, whether paper or realized, earned by Japan's Mr. Watanabe et al. This is what he found: 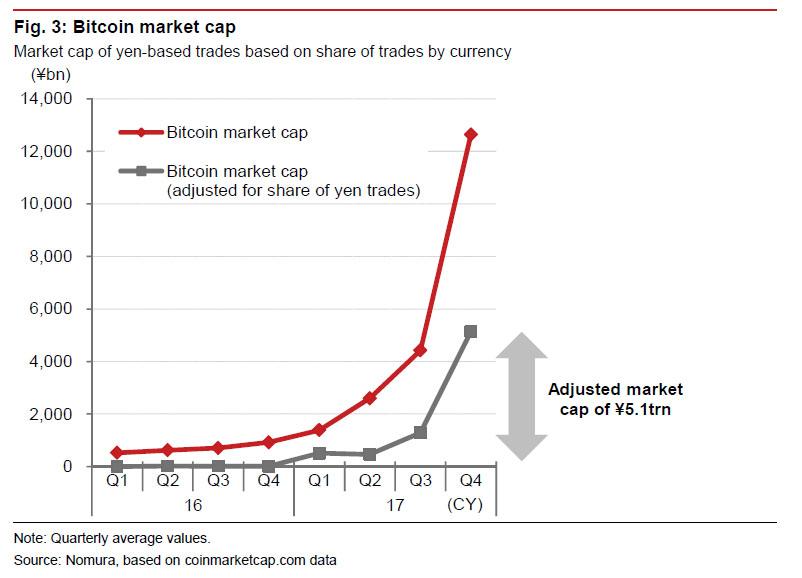 According to a 27 December 2017 Nikkei article, the number of Japanese people holding Bitcoin has reached 1mn, and assuming average holdings of 3-4 Bitcoin per person, this is broadly consistent with our estimate.

This brings us to the next logical step, the one we have hinted repeatedly is what one or more central banks may well be after, namely the "wealth effect" generated by bitcoin appreciation, and the resultant boost to consumer spending, and therefore GDP, which a global cryptocurrency bubble would enable.

And we suspect, in that case, that Kuroda would be very pleased if Fundstrat’s Tom Lee's forecast that Bitcoin’s price will reach $91,000 by March 2020, comes true. (via CoinTelegraph.com)

Lee and Fundstrat used an average of the percentage gained in price after each dip to arrive at the 2020 figure.

The Forbes piece notes that because the chart is based on a logarithmic scale as opposed to the traditional linear-based graph, BTC’s highs and lows are not as distinct.

Lee and Fundstrat also recently released the “Bitcoin Misery Index” in early March, which is described as a “contrarian index’ that lets investors know how “miserable” BTC holders are at the current price.