Following a horrendous week of damage control through a choreographed game of MSM softball, Mark Zuckerberg is now trying to calm down Facebook employees in the wake of a massive data harvesting scandal. 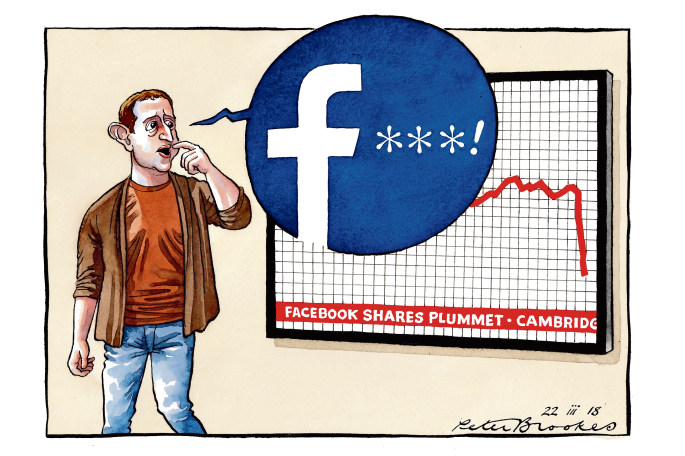 A March 18 exposé by The Guardian detailing how 28-year-old programmer Christopher Wylie "made Steve Bannon's psychological warfare tool" missed its intended Trump-linked target and landed squarely on Facebook's doorstep, after revelations that Facebook's Orwellian data collection combined with sloppy oversight of what apps and their creators do with your data has resulted in disturbing violations of privacy.

What's more - Facebook was helping the Obama Campaign target voters using harvested data, similar to what Cambridge Analytica was doing. Obama's former campaign director admitted over Twitter that Facebook not only knew of the campaign's data harvesting to "suck out the whole social graph," but that they "didn't stop us once they realized that was what we were doing."

And WikiLeaked emails released during the 2016 election revealed that Facebook COO Cheryl Sandberg really wanted "Hillary to win badly," after Hillary came over to Sandberg's house and was "magical with her kids."

Adding more fuel to the fire is the fact that one of the psychologists who created the data-harvesting app which gathered information on over 50 million Facebook users before selling it to Cambridge Analytica and others works for Facebook.

The co-director of a company that harvested data from tens of millions of Facebook users before selling it to the controversial data analytics firms Cambridge Analytica is currently working for the tech giant as an in-house psychologist.

Joseph Chancellor was one of two founding directors of Global Science Research (GSR), the company that harvested Facebook data using a personality app under the guise of academic research and later shared the data with Cambridge Analytica. -The Guardian

As The Guardian's exposé became more and more Zucked, even the founder of WhatsApp, Jan Koum - who Facebook made a billionaire after buying his company, told his Twitter followers "It is time. #deletefacebook"

It is time. #deletefacebook

With Bannon and Trump surely smirking at the Pandora's box opened by The Guardian, Mark Zuckerberg went radio silent for several days - emerging Wednesday of last week for a round of unsatisfying, robotic damage control with a couple of magazine articles and a painfully milquetoast interview on CNN.

While Zuckerberg attempted to extinguish fires outside of Facebook, the beleaguered CEO has taken multiple steps over the past few days to assuage the concerns of his company's 25,000 employees, according to the NYT.

The Silicon Valley company held a staff meeting on Tuesday to answer questions about Cambridge Analytica, featuring one of Facebook's lawyers, Paul Grewal. On Wednesday afternoon, Mr. Zuckerberg addressed employees directly, according to two Facebook employees who asked not be identified because the proceedings were confidential. Mr. Zuckerberg also spoke with staff on Friday at a regularly scheduled employee meeting, said two people who attended the event.

"Calming employees was particularly vital because morale had sunk at the company," writes Sheera Frenkel in The Times. "Earlier this week, some Facebook employees had said that colleagues had started looking to transfer from the main social network product to other branches of the company, such as to messaging app WhatsApp and photo-sharing site Instagram, which have been relatively unscathed by the recent scandals."

Because clearly one needs a "safe space" to go with that 8-figure stock-based compensation... although at this rate it may be 7-figure.

One Facebook recruiter told The Times that there were concerns over top talent leaving the company for other Silicon Valley opportunities.

"It's such a shocking difference for company employees who are used to having esteem for where they work," said Eric Schiffer, chairman of Reputation Management Consultants. "Ten years ago, Facebook was the hottest place to go out of college. This year, the best graduates are not necessarily looking at Facebook."

While Zuck wasn't present at the company's Tuesday staff meeting, he reportedly told employees of concrete measures the company was taking following the Cambridge Analytica report.

Mr. Zuckerberg said the social network was investigating apps like the third-party quiz app that had obtained access to "large amounts of information" from the social network, which had then been used by Cambridge Analytica. He also said the company would restrict third-party developers' access and would notify users whose data had been harvested by Cambridge Analytica.

Of the #DeleteFacebook campaign, Mr. Zuckerberg told The New York Times in an interview, "I think it's a clear signal that this is a major trust issue for people, and I understand that." -NYT

Facebook's senior managers promised an open line of communication on Friday while the company reevaluates its privacy and security measures, according to two employees.

What to see what Facebook has on you (at a minimum)?

Somehow it has my entire call history with my partner's mum pic.twitter.com/CIRUguf4vD

a historical record of every single contact on my phone, including ones I no longer have pic.twitter.com/XfiRX6qgHl

metadata about every text message I've ever received or sent

spoiler: I don't use messenger for SMS pic.twitter.com/ehWXhpnrrV

and the metadata of every cellular call I've ever made, including time and duration 😬😬 pic.twitter.com/Ykr3o0gZFu