Back in January we reported that president Trump was planning the roll out of a new US weapons sales policy, which could result in a massive uptick in arms proliferation and conflict escalation around the world. What Reuters described then - as part of a new "Buy American" plan - would involve US diplomats and military attaches stationed across the globe essentially playing the role of middle men for American arms contractors and US defense sales, while also encouraging embassy staff to aggressively promote weapons purchases abroad and allowing for much greater leeway in terms of which foreign entities the US does business with.

Though it sounds like the plot from the movie War Dogs - itself based on true events involving Pentagon contractors' black market East European private gun running scheme - this plan could involve the mainstreaming of just the type of weapons trade previously considered sketchy and illegal, existing at the peripheries legally ambiguous covert ops and off the books contract deals. The plan would take the seedy underbelly of the international arms trade into the light of day as official US policy, and would further deputize American diplomats as at the forefront of arms deals.

There was one problem: it appears that plan did not yield the desired surge in weapons sales by the world's biggest arms dealer: Uncle Sam. So fast forward to today when Reuters - again - reports that in an attempt to further streamline and fast-track Trump's plan to "buy American" weapons, the US is rolling out yet another policy aimed at increasing arms sales to US allies, and Trump himself will take an active part in ongoing negotiations, to "close the deal" so to speak.

As Reuters details, in a previously undisclosed phone call with the emir of Kuwait in January, President Trump pressed the Gulf monarch to move forward on a $10 billion fighter jet deal that had been stalled for more than a year.

Trump was acting on behalf of Boeing Co, America’s second-largest defense contractor, which had become frustrated that a long-delayed sale critical to its military aircraft division was going nowhere, several people familiar with the matter said.

In personally working on behalf of a private company, "Trump did something unusual for a U.S. president – he personally helped to close a major arms deal." In fact, in private phone calls and public appearances with world leaders, Trump has gone further than any of his predecessors to act as a salesman for the U.S. defense industry, analysts said.

It appears Trump has finally found a niche for himself in the White House: calling US "allies" in the hope of selling weapons while promoting war, chaos and death.

Trump's efforts will be bolstered by the full weight of the U.S. government when Trump’s administration rolls out a new “Buy American” initiative as soon as this week aimed at allowing more countries to buy more and even bigger weapons. It will loosen U.S. export rules on equipment ranging from fighter jets and drones to warships and artillery, the officials said.

Some more details on the new weapons sales policy:

Reuters has learned that the initiative will provide guidelines that could allow more countries to be granted faster deal approvals, possibly trimming back to months what has often taken years to finalize. The strategy will call for members of Trump’s cabinet to sometimes act as “closers” to help seal major arms deals, according to people familiar with the matter. More top government officials will also be sent to promote U.S. weapons at international air shows and arms bazaars.

While human rights and arms control advocates are warning that the proliferation of a broader range of advanced weaponry to more foreign governments could increase the risk of arms being diverted into the wrong hands and fueling violence in regions such as the Middle East and South Asia, this is of little import to an administration obsessed with closing the US trade deficit, even it means closing it by selling nukes to the highest bidder.

The Trump administration stresses that the main aims are to help American defense firms compete better against increasingly aggressive Russian and Chinese manufacturers and give greater weight than before to economic benefits of arms sales to create more jobs at home.

“This policy seeks to mobilize the full resources of the United States government behind arms transfers that are in the U.S. national and economic security interest,” a White House official said, responding to a request for comment on the story.

“We recognize that arms transfers may have important human rights consequences,” the official said. “Nothing in this policy changes existing legal or regulatory requirements in this regard.”

It will probably not come as a surprise to anyone that the main architects of the new policy has been economist Peter Navarro, a China trade skeptic ascendant in Trump’s inner circle. His effort to boost arms exports has drawn little resistance within the White House, Reuters officials said. 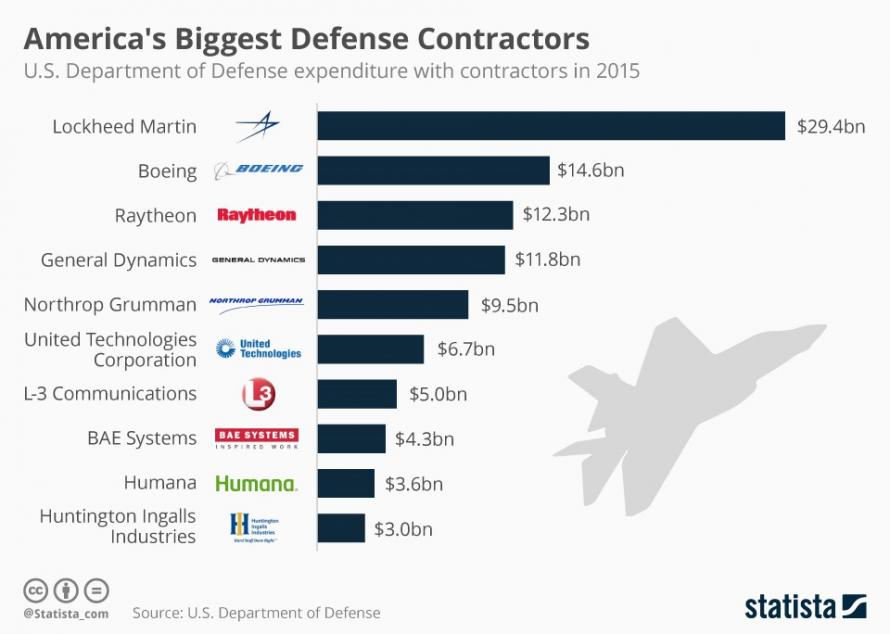 It will also not draw opposition from the military-industrial complex. News of the streamlined policy promptly sent the stock of "defense" companies surging, allowing them to forget the disappointment over the recent improvement in relations with Russia, and the containment of a possible all-out war in the middle east.

Meanwhile, Trump is set to become what Reuters had dubbed "salesman in chief"

While many presidents have helped promote the U.S. defense industry, none is known to have done so as unabashedly as Trump, a former real estate developer who seems sometimes at his most comfortable when he is promoting U.S. goods. Trump regularly discusses specific arms sales with foreign leaders in meetings and on the phone, according to White House statements. And on a trip to Japan last November, he publicly urged Prime Minister Shinzo Abe to buy more American weapons.

More recently, at an Oval Office meeting with Saudi Crown Prince Mohammed bin Salman last month, Trump held up posters with pictures of U.S. jets, ships and helicopters and other armaments sold to Saudi Arabia. “We make the best military product in the world,” he boasted to reporters as the prince sat smiling beside him.

Other presidents, including Richard Nixon, Bill Clinton and George W. Bush stressed the need to strengthen the defense industrial base, but they did it more subtly, said William Hartung, director of the arms and security project at the Center for International Policy, a non-partisan think tank.

“Nobody’s been as blatant about it as Trump,” he added. “Nobody has yelled it from the rooftops.”

Former President Barack Obama would sometimes talk to allied leaders about weapons systems that he felt suited their security needs, but aides said he preferred to keep weapons salesmanship at arm’s length.

The Trump administration’s plan to overhaul the Conventional Arms Transfer policy, the framework for evaluating foreign sales, goes well beyond Obama’s relaxation of rules in 2014 that enabled U.S. arms contractors to sell more overseas than ever before. Obama drew a clear line, however, requiring each sale to meet strict human rights standards – though he was criticized at times for allowing some controversial sales.

Trump has already gone ahead with several deals that Obama blocked, including the sale of $7 billion in precision-guided munitions to Saudi Arabia despite human rights groups’ concerns they have contributed to civilian deaths in the Saudi-led campaign in Yemen’s civil war.

The bottom line is that these weapons will be not only sold, but also used, which also means that many regional conflicts and wars are coming. Which also explains the bitcoin-esque chart of Boeing in the last few years as America doubles down as the world's biggest arms dealer.