The specified file public://inline-images/https_%2F%2Fs3-us-west-2.amazonaws (5)_2.jpg could not be moved/copied because no file by that name exists. Please check that you supplied the correct filename.

The ECB will soon be in a bind as the European economy slows. Germany leads the slowdown... 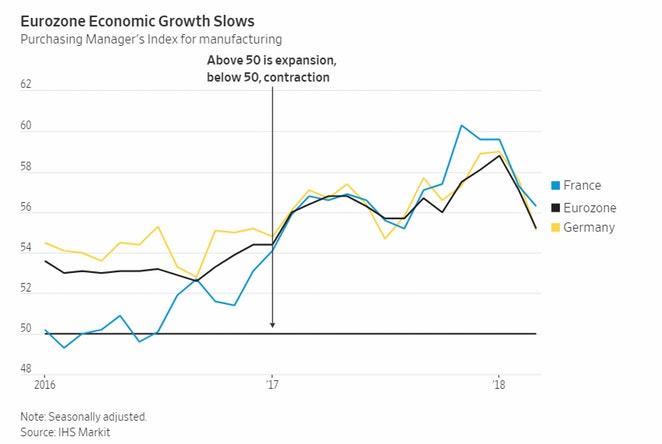 Gustav Horn, one of Germany's most-experienced business-cycle analysts, says the Possibility of German Recession Increases Noticeably. The following snips are via Goggle translation from German.

The uncertainty in the economy and especially in the financial markets, which was largely triggered by US trade policy, is having an effect: the risk of Germany falling into recession over the next three months has increased noticeably from March to April. This is signaled by the economic indicator of the Institute for Macroeconomics and Business Cycle Research (IMK) of the Hans Böckler Foundation.

For the period from April to the end of June, the early warning tool, which brings together the latest available data on the economic situation, has a median recession probability of 32.4 percent. In March, the recession risk was only 6.8 percent. The indicator, which operates according to the traffic light system, jumps from "green" to "yellow" and thus signals increased uncertainty (recession probability from 30 percent).

The IMK explains the significant increase in recession risk with a mix of three factors: the recent noticeable decline in industrial production, increased volatility on the stock markets and a deterioration in sentiment indicators.

"President Trump's flirtation with protectionism sends out shockwaves that hit the German economy through the financial markets. Even before it is clear whether the American punitive tariffs will be extended to European goods, there is a great deal of uncertainty, "says the scientific director of the IMK, Prof. Dr. med. Gustav A. Horn.

Numerous data from the real economy and the financial sector flow into the IMK economic indicator. In addition, the instrument takes into account sentiment indicators. The IMK uses industrial production as a benchmark for a recession because it reacts faster to a slump in demand than gross domestic product (GDP). The early warning system signals a recession when industrial production shrinks by at least one percent over a five-month period.

Horn says he is not yet ready to revise down his overall optimistic forecasts for 2018 and 2019, because of continued strong domestic demand. But if the current trend in the indicator were to persist, the forecast would have to be revised downwards dramatically.

We agree with his assessment that, in this climate, it will matter whether the Europeans are able to confront Trump with a single voice (we think this is not a given), and whether the ECB will slow down its exit from non-standard policies. We think the ECB is very sensitive to these indicators, and is unlikely to raise interest rates for quite some time after the end of the QE programme. What we don't see is a more proactive fiscal policy in Germany - for example the abandonment of the Schwarze Null fiscal target of the German government: the explicit policy goal of running a fiscal surplus even though this not required under EU or national fiscal rules.

In this context we noted a point made by Claire Jones in the FT about the output gap discussion within the ECB's governing council. She quotes from a recent speech by Benoît Coeuré, who argued that a slower-than-expected fall in the eurozone's potential growth rate would imply that the neutral interest rate is higher. That idea would suggest that the ECB has more scope to raise interest rates before triggering monetary tightening. If Horn's indicators are right that view would be refuted, because Horn suggests that Germany and the eurozone are reverting to the previous sluggish levels of economic growth. This debate is clearly not settled yet, but we are not yet ready to buy into the argument of a improvement in long-term structural growth rates for the eurozone.

The latest, unexpected sign of weakness came from Germany, Europe’s exporting powerhouse. Figures released by the country’s economics ministry recorded a 1.6% drop in industrial output in February compared with January. That was a big surprise, since economists surveyed last week by The Wall Street Journal were expecting an increase of 0.3%.

That was far from the only disappointment this year. The signs of unanticipated frailty in the region have included a drop in the overall Purchasing Managers Index, which tracks activity in the manufacturing and services sectors, as well as a drop in retail sales. Measures of confidence among consumers and businesses have also been declining.

Some of the weakness reflects temporary factors that shouldn’t act as a drag on growth in the months to come. A spell of unusually cold weather across Europe has been a hindrance to activity.

In Germany, strikes by the powerful IG Metall labor union—which represents metal and electrical workers—lowered industrial output in February, but concluded in a pay deal and further disruption is unlikely.

However, the surveys of purchasing managers point to a more durable problem: Businesses are experiencing shortages of some inputs and workers with particular skills, which suggests the eurozone economy can’t grow this fast for long.

The surprising strength of the eurozone’s recovery in 2017 was largely because of what was happening outside, rather than inside, the currency area. Across the globe, a synchronized acceleration in investment spending helped boost trade flows, and European industry in particular.

ECB officials are arguing publicly over how quickly to phase out crisis-era stimulus measures.

One group of officials, centered around Mr. Draghi and chief economist Peter Praet, don’t want to tighten monetary policy too fast, warning that eurozone inflation remains too weak at 1.4%. In a speech last month, Mr. Draghi highlighted several risks to the region’s economy that could further soften inflation, including a possible global trade war, and a stronger euro exchange rate.

Is it a combination of cold weather and strikes or something more serious?

Signs point to the latter. It's not just Germany. The reset of the Eurozone is weak as well. In the US, GDP estimates are down to two percent and generally falling.

The whole global economy is slowing.

All of which may help explain the fact that the spread between US 2Y Yields (driven by a data-independent, hike-at-all-costs-coz-we-need-the-ammo Fed) and German 2Y Yields (ECB suppression and a slowing economy) is at 300bps... the largest in history...