The specified file public://inline-images/https_%2F%2Fs3-us-west-2.amazonaws (7)_1.jpg could not be moved/copied because no file by that name exists. Please check that you supplied the correct filename.

The BOJ thinks Japan may hit its 2% inflation target in 5 years. Kuroda says risks are to the downside. 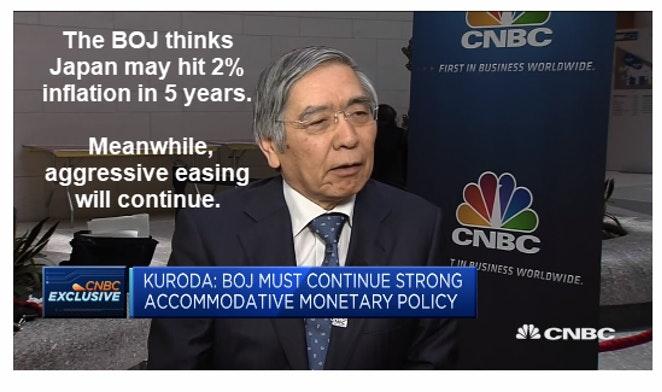 It may take Japan five more years to reach its 2% inflation target  according to BOJ governor Haruhiko Kuroda.

"Sometime within the next five years, we will reach [our] 2 percent inflation target," Governor Haruhiko Kuroda told CNBC's Sara Eisen over the weekend. Once that level is reached, we will start "discussing how to gradually normalize the monetary condition."

Inflation remains low. Japan reported its consumer price index, excluding fresh food and energy, rose half a percent in the 12 months through March.

"In order to reach [our] 2 percent inflation target, I think the Bank of Japan must continue very strong accommodative monetary policy for some time," Kuroda added in his interview with CNBC.

It's pretty amazing how Japan has failed to destroy its currency despite decades of trying. Once again, I repeat my foolproof plan to cure low inflation in Japan.

Why wait another five years?

Here is my follow-up article that brings MMT into the picture: Note to BoJ: Try Something Different or Look Perpetually Foolish.