The specified file public://inline-images/https_%2F%2Fs3-us-west-2.amazonaws_6.jpg could not be moved/copied because no file by that name exists. Please check that you supplied the correct filename.

Europe is huffing and puffing and full of fury over Trump's Iran decision. The French even coined a new word. 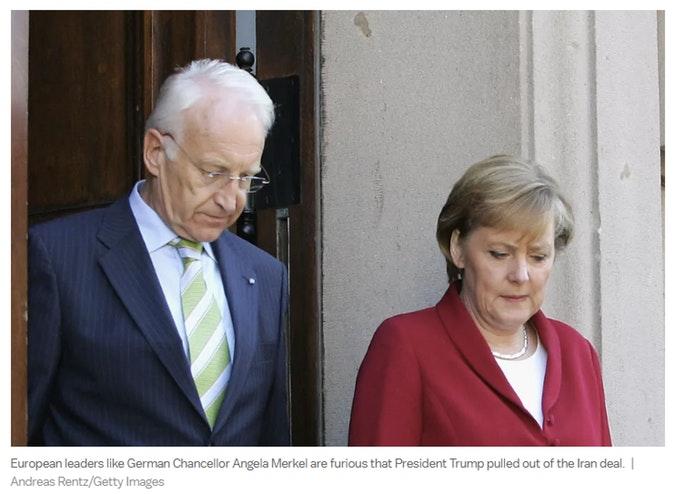 Trump's decision to re-impose sanctions means a blanket ban on all new business with Iran, effective immediately. Existing operations have three to six months to be wound down.

The US's new ambassador to Germany, Richard Grenell, wasted no time poking a finger in the eyes of his host.

As @realDonaldTrump said, US sanctions will target critical sectors of Iran’s economy. German companies doing business in Iran should wind down operations immediately.

In his first week in office in Berlin — New US ambassador to #Germany calls on German firms to ‘wind down operations in Iran’. Germany, France and UK emphasised their ‘continuing commitment’ to #JCPOA #IranDeal https://t.co/e9a7LhELMs

.@RichardGrenell has hardly been on the job 48 hours and he's already upset the Chairman of the German-Iranian Chamber of Commerce. Uh-oh. https://t.co/TSAhphh0zE

European leaders are calling President Trump’s decision to pull out of the Iran nuclear deal a potentially catastrophic mistake. One French diplomat is so furious, he even coined a new description of Trump’s view of the world: “unisolationism.”

The phrase is the brainchild of one of the most prominent European diplomats in the US, François Delattre, France’s ambassador to the United Nations. He told Karen DeYoung of the Washington Post that the Trump administration’s foreign policy was a dangerous “mix of unilateralism and isolationism” that he combined into “unisolationism.”

Europe's response to Trump's Iran move is just like a scene from Macbeth Act V:

"It is a tale. Told by an idiot, full of sound and fury, Signifying nothing."

What a bunch of blowhard wimps.

Dear Europe: Grow a Backbone on Something Important, Defy Trump on Sanctions