The specified file public://inline-images/http_%2F%2Fcom.ft_.imagepublish.upp-prod-us.s3.amazonaws.jpg could not be moved/copied because no file by that name exists. Please check that you supplied the correct filename.

Well that did not take long. Less than 24 hours after Italy's latest coalition unveiled its plans, which included the potential for a parallel currency, The Financial Times' columnist John Dizard has penned a status-quo-supporting anti-'Mini-BoT' scaremongering "opinion" piece explaining how "the menace of Italian treasury bills known as 'mini-BoTs' has made European monetary policy interesting again," and that these "note-like bonds will potentially help crooks, cheat taxpayers and widen country’s divide." 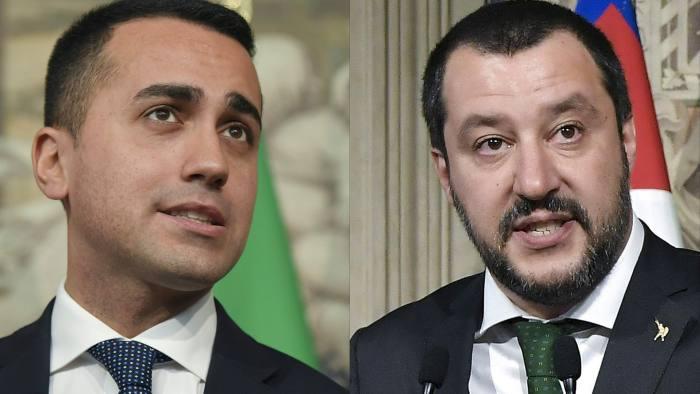 In the past two years, the eurozone seemed to have overcome its existential threats thanks to the European Central Bank’s relentless bond purchases. Bond markets were achieving a near-Canadian level of boredom, marked by slow increases in long rates, a moderate recovery and too little volatility to justify traders’ bonuses.

That changed with the March 4 election in Italy. In coming weeks we will see if the populist parties can stitch together a coalition and avoid a new vote. They do, though, agree that their tax cuts and aggressive spending can be paid for in part by issuing mini-BoTs. These would be small (euro) denomination, non-interest-bearing Treasury bills in the form of bearer securities that would be secured by tax revenues.

“BoT” is the abbreviation for an Italian treasury bill, and the small denomination makes them mini. Conventional BoTs are electronic book-entry securities but the mini-BoTs would be printed, reportedly using the state lottery’s ticket presses, and the designs have been selected.

Private parties would not be obliged to accept mini-BoTs as payment. While mini-BoTs would almost certainly trade at a discount in the marketplace, the paper (or book entries) could be used to settle tax debts or pay public-sector entities at the mini-BoTs’ par value.

Despite this, the populist parties, led by the Lega Nord and the Five Star Movement, continue to insist that mini-BoTs would not be a parallel currency or a backdoor way to add to the national debt. The populists vow to respect the EU’s Treaty of Lisbon and under Article 106 of that pact only the ECB can issue the euro currency.

The populists also say that mini-BoTs will not increase the Italian national debt, supposedly limited by the eurozone’s stability pact. Mini-BoTs, they say, are simply a way of creating a transferable record of (future) tax receipts.

Since the mini-BoTs would not be currency, transfers from account to account or hand to hand would not be subject to the €3,000 legal limit on cash payments within Italy. That would be convenient for anyone whose business could be more easily carried out with large cash, sorry, mini-BoT transactions. Mini-BoTs, then, would stimulate the vibrant informal sector of Italy’s economy.

This is not the first time a government facing limits on bond borrowings has issued a tax anticipation note. California used them during a budget crunch in 2001 and Buenos Aires issued “Patacon” bonds to pay its bills in 2001-02, in the wake of the Argentine financial crash. These were ultimately redeemed with tax receipts.

When Syriza came to power in Greece in 2015, Yanis Varoufakis, its first finance minister, proposed a form of “public digital payments”, that would, it was expected, feature “future tax-backed transactions.”

The Italian populists took advice on how to structure mini-BoTs from the Syriza socialists and Greek civil servants. None of those instruments, though, were printed bearer transactions. Even Greeks who empathise with the Italian resentment of Eurocrats were put off by that feature.

Central bankers and eurozone finance ministers have been balanced in their reaction to the mini-BoT proposal. Balanced, that is, between outrage and apoplexy.

The Eurocrats believe the mini-BoT plan is another plot to rip off the foreigners. That may be true but it would not be the whole story. Mini-BoTs would also be a way for connected Italians to rip off their less-connected fellow nationals.

Multiple exchange rates are an old trick but that can work for a while. The Eurocrats believe mini-BoTs will be a veiled way to finance populist deficit spending. If that is permitted, the establishment thinking goes, the conventionally minded eurozone voting public would rebel at the debasement of their currency.

The populist retort would be that Italian compliance with orthodoxy has led to stagnation and youth unemployment. True enough — but young people without jobs would not be beneficiaries of mini-BoTs.

No, the big profits would go to those who would buy mini-BoTs from pensioners and state creditors at a discount, say 20 or 30 per cent. They will then sell the quasi-currency to deep-pocketed buyers of Italian goods and services, or property and equities.

There would also be an internal redistribution. Roughly speaking, northern Italian industry and skilled workers would receive the value of export subsidies, and payments to southern Italian pensioners and state employees would get haircuts.

If mini-BoTs are introduced on a large scale, political strains would eventually force either Italy or Germany out of the euro. Having done its damage, the mini-BoT scheme would ultimately be wound up.

Perhaps this is why the establishment is starting to panic...

Italian risk premia are exploding (even after Draghi's "whetever it takes")...