President Nicolas Maduro is here to stay -- at least for a while. After winning a landslide ‘election,’ with over two-thirds of the vote, Maduro will remain in the saddle for another five years, in principle. But, as Venezuelans cast their ballots, Venezuela’s hyperinflation episode made new highs, with the annual inflation rate breaching 20,000% for the first time on election day. Currently (5/22/18) Venezuela’s annual inflation rate is at its highest ever: 20,186% (see chart below).

The most important price in an economy is the exchange rate between the local currency and the world’s reserve currency — the U.S. dollar. As long as there is an active black-market (read: free market) for currency and the data are available, changes in the black-market exchange rate can be reliably transformed into accurate estimates of countrywide inflation rates—if the annual inflation rates exceed 25%. The economic principle of Purchasing Power Parity (PPP) allows for this transformation.

Let’s take a closer look at just how rapidly Venezuela’s prices are rising, and how they stack up against other hyperinflation episodes in Latin America (see the table below). Last month, the monthly inflation rate—yes, the monthly—reached a new high of 234%. At this rate, prices doubled every 17.5 days. 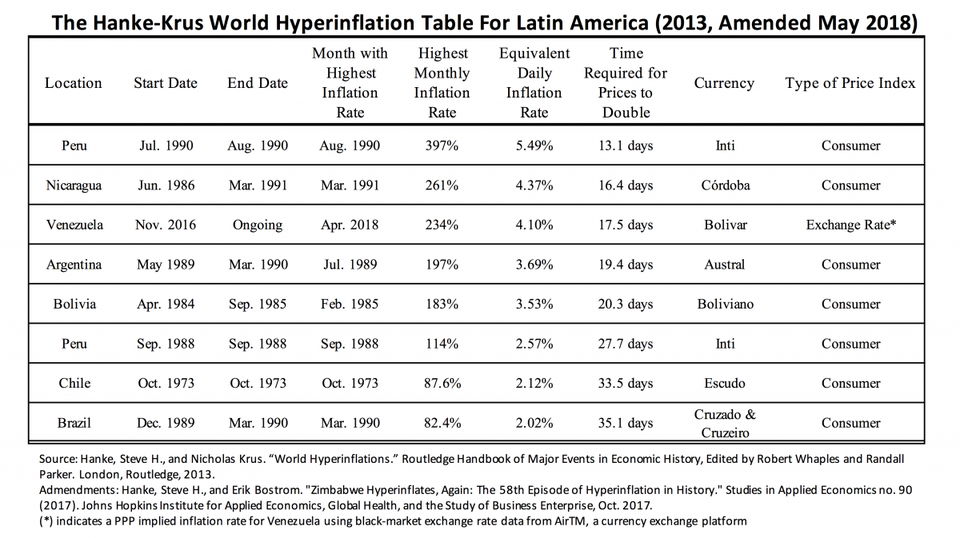