"There Is A Sense Of Panic In The Air": Italian Bond Carnage Returns

Update: The speculation of "will he, won't he" is over as Italy's president Mattarella gives Conte the green light to form a populist government, one which will blow out the Italian budget, and set the country on collision course with Brussels and Berlin:

... while the Bund-BTP spread has blown out again to 194 bps on Wednesday.

Today's selling was prompted by a report that Italian President Mattarella has not yet decided whether to give the PM role to PM appointee, law professor Giuseppe Conte, with Repubblica reporting that Mattarella is to take time on the Premier candidate over concerns that his cabient may be far too anti-establishment.

As the FT notes, the anti-establishment Five Star Movement and the far-right League have become locked in a stand-off with Sergio Mattarella after pushing for a staunchly Eurosceptic economist, Paolo Savona, to be finance minister. As Repubblica adds, Mattarella is taking extra time before his decision on premiership as he is highly critical of Finance Minister candidate Savona.

Meanwhile, the public debt contagion has started to spread, as Monte dei Paschi’s bonds are also selling off with the yield on its €750m Tier 2 bond climbing to a record high of 8.2%: Monte dei Paschi raised the debt, which counts towards its capital ratios, at 5.375% in January and had planned to sell a further €700m of such paper before the year-end to strengthen its balance sheet.

Concerns have emerged about Italian banks’ non-performing loans; the two populist parties have said they will repeal laws allowing banks to forcibly recover debts from Italian citizens without judicial approval. The share prices of bad debt collection specialists such as Cerved and DoBank have fallen heavily this past week.

Quoted by the FT, Fidelity portfolio manager David Simner said there had been “a sense of panic in the air” in recent days as "investors have scrambled to reduce risk as the spending implications of the new government has naturally caused concerns over the future dynamics of the debt load of a country which is already very heavily laden." He concluded that many investors remain in a wait and see mode "if [the market] has found a new lower clearing level that may provide some consolidation."

However, the best summary of Italy's troubles came from Bloomberg's Mark Cudmore overnight with the following damning summary:

In Italy, the president has no good options as far as markets are concerned. If he blocks the coalition, it’ll leave the country in limbo and stir up popular resentment before new elections. But if he approves the coalition, then it’s even more worrying because of the government’s fiscally irresponsible proposals.

Of course, the real catalyst for the ongoing selling in Italy is the market's much delayed reaction to the electoral victory of the anti-establishment parties which now threaten to blow out the Italian budget, at a time when the ECB is not only the only buyer of Italian bonds... 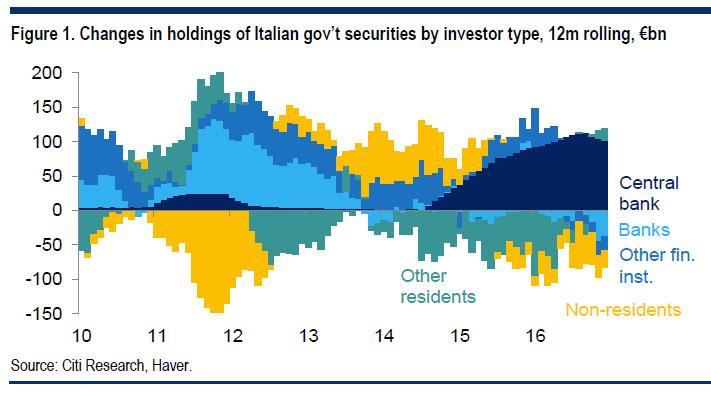 ... and worse, coming just as the ECB is tapering its BTP purchases.

What happens next? Well, as most sellside desks predict, the Bund-BTP spread is virtually assured of hitting 200 bps, and until there is some further clarity on how the current political power moves play out, it will be impossible to call a bottom to the Italian rout, which meanwhile is starting to "contage" across Europe as that old Europe bogeyman, redenomination risk...

...is slowly but surely rising.