Led by an unusually outspoken Putin, Macron - who seemed more enamored with Putin than the rest, agreed with the Russian president's concerns over the erosion of trust and the specter of a global crisis brought on by Washington's disruptions.

“The free market and fair competition are being squeezed by confiscations, restrictions, sanctions,” Putin said.

“There are various terms but the meaning is the same -- they’ve become an official part of the trade policy of certain countries.”

The “spiral” of U.S. penalties is targeting “an ever larger number of countries and companies,” undermining “the current world order,” he said.

Macron replied: “I fully share your point of view.” 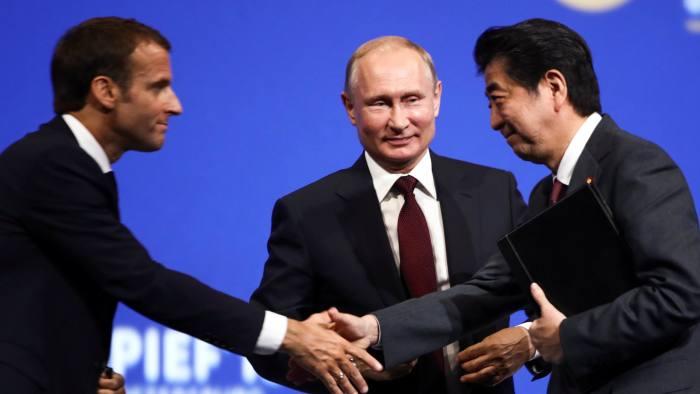 Such warnings only confirm Mr Putin’s world view. Without mentioning the US, he complained that the multilateral economic world order was being “crushed” by a proliferation of exceptions, restrictions and sanctions.

The “darkest cloud” on the economic horizon is the “determination of some to actually rock the system,” Lagarde said, prompting Wang, a new point-man for Chinese foreign policy, to agree.

“Politicizing economic and trade issues, and brandishing economic sanctions, are bound to damage the trust of others,” he said.

Putin also expressed frustration at having little contact with Trump and faulted the investigation into whether there was collusion between Trump's campaign and Russia and whether Russia tried to interfere with the 2016 U.S. election.

"We are hostages to this internal strife in the United States," Putin said. "I hope that it will end some day and the objective need for the development of Russian-American relationships will prevail."

As Bloomberg reports, the panel had its prickly moments. After Putin suggested that Europe depended on the U.S. for its security, and told Macron there was “no need to worry” because Russia would help, the French president shot back:

“I’m not afraid, because France has an army that knows how to protect itself.”

However, the most ominous and direct messages were from Putin himself about changes to the unipolar order.

In his opening statement at the plenary session, Putin says the global economic order is being undermined and that breaking the rules is becoming the rule of the game. 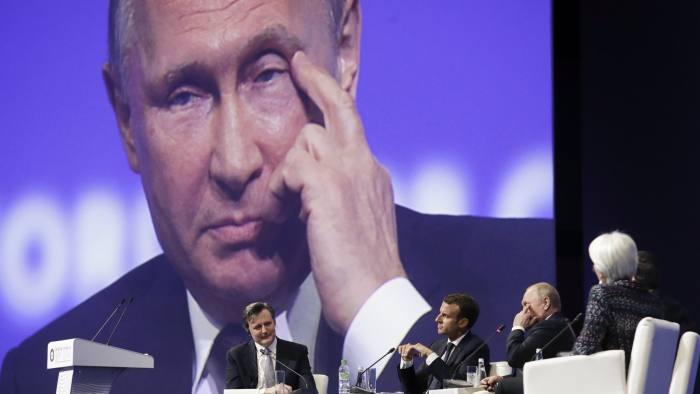 Coming a day after Russia's Finance Minister Anton Siluanov said at the St. Petersburg International Economic Forum that settlements in US currency could be dropped by Russia in favor of the euro.

"As we see, restrictions imposed by the American partners are of an extraterritorial nature. The possibility of switching from the US dollar to the euro in settlements depends on Europe’s stance toward Washington’s position,” said Siluanov, who is also Russia’s first deputy prime minister.

“If our European partners declare their position unequivocally, we could definitely see a way to use the European common currency for financial settlements, such as payments for goods and services, which today are often subject to restrictions,” Siluanov added, dangling the bait in front of Merkel and Macron.

The global economy is facing a threat of a spiraling protectionist measures that can lead to a devastating crisis, Vladimir Putin warned. Nations must find a way to prevent this and establish rules on how the economy should work.

The Russian president spoke out against the growing trend of using unilateral restrictions to achieve economic advantage, as he addressed guests of the St. Petersburg International Economic Forum (SPIEF) on Friday.

“The system of multilateral cooperation, which took years to build, is no longer allowed to evolve. It is being broken in a very crude way. Breaking the rules is becoming the new rule,” he said.

Putin sharply criticized the sanctions, saying they signal "not just erosion but the dismantling of a system of multilateral cooperation that took decades to build."

Putin called for a change of course, for free trade to be defended, and for rules-based regulation of the global economy, which would alleviate the chaos resulting from the rapid technological transformations arising from the development of digital technology.

“The disregard for existing norms and a loss of trust may combine with the unpredictability and turbulence of the colossal change. These factors may lead to a systemic crisis, which the world has not seen yet,” he said.

"US sanctions hurt trust in the US dollar as the world's reserve currency."

All of which appears to confirm many conspiracy-theorist's reasoning for why Russia is stockpiling gold faster than any other nation on earth...