Via The Daily Bell

It is a crime to report on certain events in Great Britain. But one defiant journalist ignored the court imposed gag orders and reported anyway on three connected sex abuse trials involving dozens of defendants.

Police arrested Tommy Robinson outside the courthouse while he filmed using Facebook live. The courts had already delivered a suspended sentence to him for covering the second trial. Now they say he has breached the conditions of that suspended sentence and will be spending 13 months in prison.

In the space of the next few hours, a judge tried, convicted, and sentenced him to 13 months in jail — and also issued a gag order, demanding a total news blackout on the case in the British news media. Robinson, whose real name is Stephen Yaxley-Lennon, was immediately taken to Hull Prison.

What This is NOT About

Robinson is known for starting the English Defense League. The idea is to protect Great Britain from Muslim extremists.

But this is not about Robinson’s politics. You don’t have to support his message in order to be horrified that a man is being silenced by the British justice system.

It is extremely important to protect “offensive speech” because the term is entirely subjective. Remember it wasn’t so long ago that people found it offensive that black and white people should be able to attend the same schools. When governments have the power to define crimes subjectively, they can punish anyone they want.

In the first case, Robinson–whose real name is Stephen Yaxley-Lennon–was held in contempt of court with a suspended three-month sentence for filming on the court premises. The judge admitted that whether one is allowed to film certain court procedures comes down to where a comma is placed in the law.

The judge broadly interpreted the law to ban recording of anything court related. He told Robinson to refrain from recording or his sentence would be imposed and increased.

But another interesting thing about the first court procedure is that the judge took issue with the title placed under the video that Robinson took. It said, “Tommy Robinson in Canterbury exposing
Muslim child rapists, Police help them escape.”

If you read the list of the defendants in the child human trafficking case, you will find that all 29 have names typically associated with Muslims and people from predominantly Muslim areas of the middle east. The judge helped to shield the defendants from being recorded by Robinson by allowing them to be escorted out of court by police via an alternative route.

What it is Really About

This contempt hearing is not about free speech. This is not about the freedom of the press. This is not about legitimate journalism; this is not about political correctness; this is not about whether one political viewpoint is right or another. It is about justice, and it is about ensuring that a trial can be carried out justly and fairly. It is about ensuring that a jury are not in any way inhibited from carryin out their important function. It is about being innocent until proven guilty. It is not about people prejudging a situation and going round to that court and publishing material, whether in print or online, referring to defendants as “Muslim paedophile rapists”. A legitimate journalist would not be able to do that and under the strict liability rule there would be no defence to publication in those terms. It is pejorative language which prejudges the case, and it is language and reporting – if reporting indeed is what it is – that could have had the effect of substantially derailing the trial.

So the judge brings up a good point that the defendants are considered innocent until proven guilty. But how often are those arrested given such VIP treatment? Mugshots and reports typically come out the next day. Somehow, un-prejudiced juries are found.

It certainly seems like Robinson was sensationalizing the story. He can be criticized for that. Perhaps he is an untrustworthy news source or a poor journalist. But that is not for the judge to decide. The judge handed down a ruling which defined what he believes is real journalism versus fake news.

He also appears to issue an order in the same document that prohibits any media outlets from reporting on each case until after it concludes.

In February the Independent ran an article explaining the case after 17 men and one woman was convicted of grooming, drugging, and raping young women. The trial reported by the Independent, and the trials covered by Robinson, stem from the same “grooming gang” which allegedly victimized 700 girls near Newcastle.

Before 2014, police were responding to incidents on an ad hoc basis, with efforts by authorities trying to persuade victims to keep away from the abusers and change their behaviours.

The review found the approach led to “consideration of deterrent punishments of victims for being drunk and disorderly or for making false allegations when accounts were changed”.

“This sent an unhelpful message to perpetrators – they were unlikely to be prosecuted or prevented from continuing to abuse – encouraging an arrogant persistence,” it added.

“It also had a significant impact on victims who learnt that nothing would be done against perpetrators.”

A total of 17 men and one woman have been convicted of offences including rape, sexual abuse, supplying drugs and trafficking for sexual exploitation in a series of trials over the Newcastle case.

Of eight victims covered in the trials, six were white and two were of African heritage, while the perpetrators came from a diverse range of backgrounds including Pakistani, Bangladeshi, Indian, Iranian, Iraqi, Kurdish, Turkish, Albanian and Eastern European.

Fast forward to the events which unfolded this past weekend, and the ban on recording the court proceedings was even more broadly interpreted. Robinson was outside of the court building filming on facebook live.

He was arrested for breach of the peace, and within six hours had a sentence imposed on him to spend over a year in prison. Tommy Robinson is caged for reporting–responsibly or not–on a trial. And it is all without due process–he was convicted if you can call it that, and sentenced at hearings, not trials.

But then the justice system silenced more than just Robinson. After he was arrested, a number of media outlets removed their articles about Robinson’s arrest because of the Judge’s gag order. The excuse was the same one used to silence reporting on the case Robinson was covering: to prevent prejudice, as in, to make sure the jury pool is not tainted with misinformation about the cast. But seeing as Robinson has already been carted off to prison, this doesn’t make any sense.

A message on Google stated that some search results about the incident may have been removed because of European data protection laws. 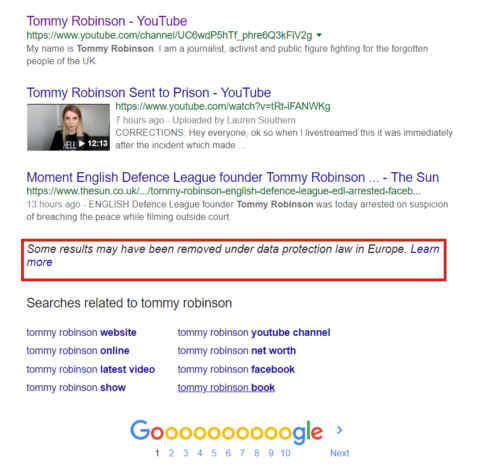 And this is the state of “justice” in the United Kindom. A judge can eradicate the media’s right to report on the news. A judge can jail a man for free speech, and journalism.

Let me this be a lesson to America. This is where the regulation of “fake news” and “hate speech” leads. This is what happens when laws are implemented which allow governments to regulate the media, and censor the internet.

And whether or not you agree with what is being said, now is the time to defend the right to say it. Otherwise, when it is your turn to be accused of spreading offensive fake news, there will be no one left to defend you.