The specified file public://inline-images/http_%2F%2Fcom.ft_.imagepublish.upp-prod-us.s3.amazonaws_1_2.jpg could not be moved/copied because no file by that name exists. Please check that you supplied the correct filename.

The Ukrainian government's staged assassination of anti-Putin journalist Arkady Babachenko has taken an even stranger turn, as evidence has emerged that his would-be "Russia-ordered" assassin and the man who supposedly hired him, both say they worked for Ukrainian counterintelligence, casting serious doubt on the official story. 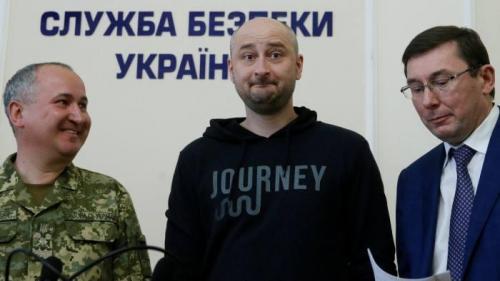 Only now we find that the hitman, Oleksiy Tsimbalyuk, is an outspoken critic of Russia who says he worked for Ukrainian counterintelligence - a claim Ukraine initially denied but later admitted to be true. Meanwhile the guy who supposedly hired Tsimbalyuk, Boris L. German, 50, also says he worked for Ukrainian counter-intelligence, a claim Ukraine denies as its immediately destroys the carefully scripted, if rapidly imploding, Ukrainian narrative meant to scapegoat Russia for what has been a "fake news" story of epic proportions, emerging from the one nation that not only was the biggest foreign donor to the Clinton foundation, but has made fake news propaganda into an art form.

The New York Times reports that Tsimbalyuk - a former Russia-hating priest was featured in a 10-minute documentary in January 2017 in which "he called killing members of the Russian-backed militias in eastern Ukraine "an act of mercy", further calling into question why Russia would hire him for the supposed assassination in the first place.

As even the Russophobic NY Times puts it:

Given such strong and publicly avowed enmity toward Russia, it is odd to say the least that Mr. Tsimbalyuk would be selected to carry out the contract killing of a prominent Kremlin critic.

German claims he took orders from Moscow businessman Vyacheslav Pivovarnik - who he says works for one of Putin's personal foundations.

Ukrainian officials also claim that German has a list of another 30 targets which Moscow wants to wipe out - something he claims he has since passed onto Kyiv.

Prosecutors claimed German had been given a down payment of $15,000, half what he was promised for carrying out the hit.

German said: 'I got a call from a longtime acquaintance who lives in Moscow, and in the process of communicating with him it turned out that he works for a Putin foundation precisely to orchestrate destabilization in Ukraine.' -Daily Mail

"Six months ago, my old acquaintance contacted me, an ex-citizen of Ukraine, now living in Moscow," German told a Ukrainian court, adding "He works in a personal foundation of Putin's - and is in charge of organizing riots in Ukraine and planned acts of terror at the next presidential elections. He is called Vyacheslav Pivovarnik. This is not a fairy tale, there's nothing mystical here, everything has been proved."

German's lawyer Eugene Solodko wrote on Facebook that his client was an executive director of Ukrainian-German firm Schmeisser - the only non-state owned arms producer in the country.

Russia has denied German's claim, with a Putin spokesman saying "No such foundation exists in Russia. Any allegations about Russia's possible complicity in this staging is just mudslinging. They do not correspond to reality."

Meanwhile, senior Ukraine officials have been on the defensive since Wednesday, when the head of security services announced they had staged the death of Babchenko so they could track his would-be killers to Russian intelligence, a story the International Federation of Journalists slammed as idiotic, nonsensical and completely undermining Ukraine's credibility.