The U.S. Shale Oil Industry utilizes a stunning amount of equipment and consumes a massive amount of materials to produce more than half of the country's oil production.  One of the vital materials used in the production of shale oil is frac sand.  The amount of frac sand used in the shale oil business has skyrocketed by more than 10 times since the industry took off in 2007.

Now, 50 billion pounds of frac sand in the Permian is an enormous amount when we compare it to the total 10 billion pounds consumed by the entire shale oil and gas industry in 2007.

To get an idea of the U.S. top shale oil fields, here is a chart from my recent video, The U.S. Shale Oil Ponzi Scheme Explained: 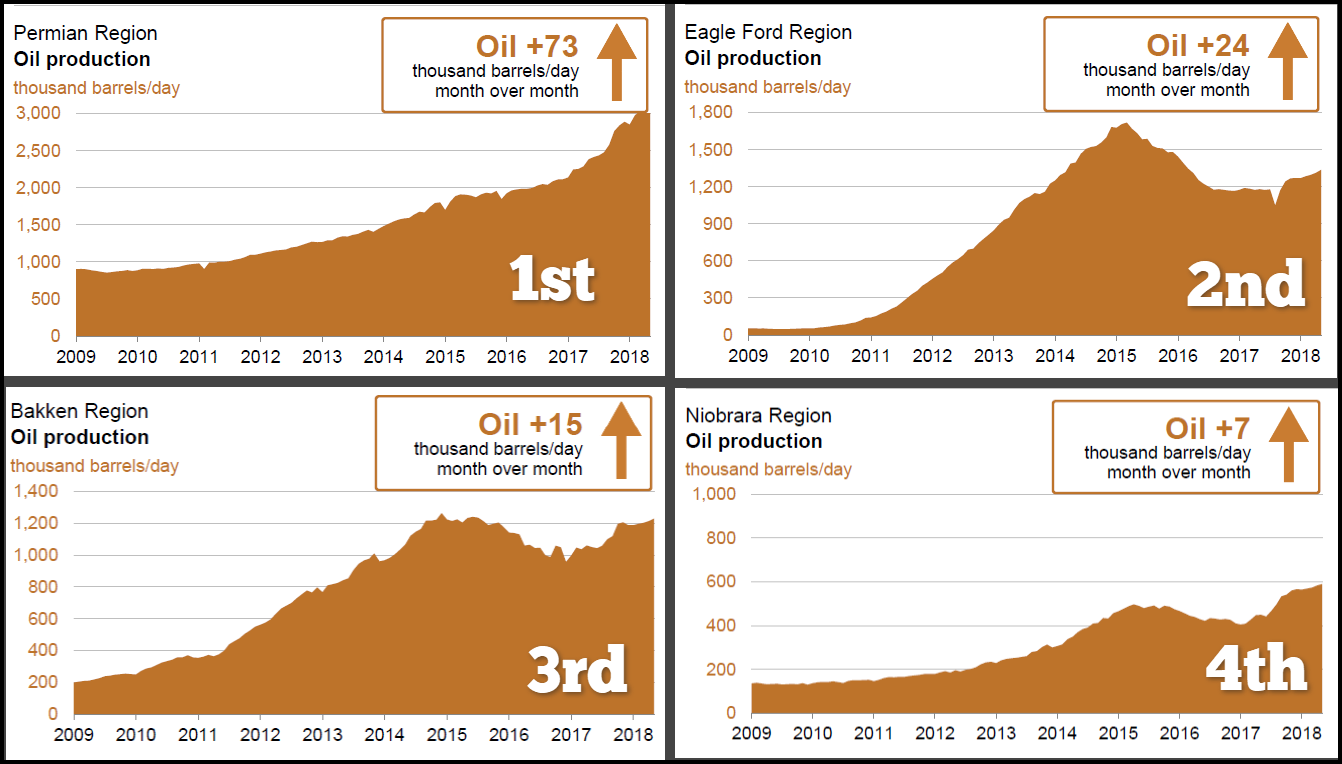 As we can see in the graph above, the Permian Region is the largest shale oil field in the United States with over 3 million barrels per day (mbd) of production compared to 1.7 mbd in the Eagle Ford, 1.2 mbd at the Bakken and nearly 600,000 barrels per day in the Niobrara.  However, only about 2 mbd of the Permian's total production is from horizontal shale oil fracking.  The remainder is from conventional oil production.

Now, to produce shale oil or gas, the shale drillers pump down the horizontal oil well a mixture of water, frac sand, and chemicals to release the oil and gas.  You can see this process in the video below (example used for shale gas extraction):

The Permian Region, being the largest shale oil field in the United States, it consumes the most frac sand.  According to BlackMountainSand.com Infographic, the Permian will consume 68,500 tons of frac sand a day, enough to fill 600 railcars.  This equals 50 billion pounds of frac sand a year.  And, that figure is forecasted to increase every year. 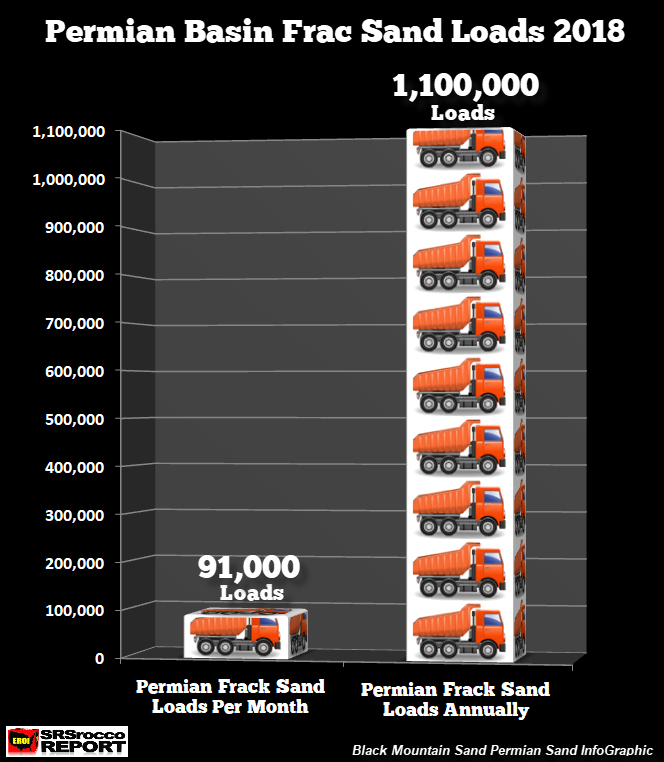 According to Walmart, their drivers travel approximately 700 million miles per year to deliver products from the 160 distribution centers to thousands of stores across the country.  From the information, I obtained at MWPWL International on Walmart's distribution supply chain, the average one-way distance to its Walmart stores is about 130 miles.  By dividing the annual 700 million miles traveled by Walmart drivers by the average 130-mile trip, the company will utilize approximately 5.5 million truckloads to deliver its products to all of its stores in 2018.

The following chart compares the annual amount of Walmart's truckloads to frac sand delivered in the Permian for 2018: 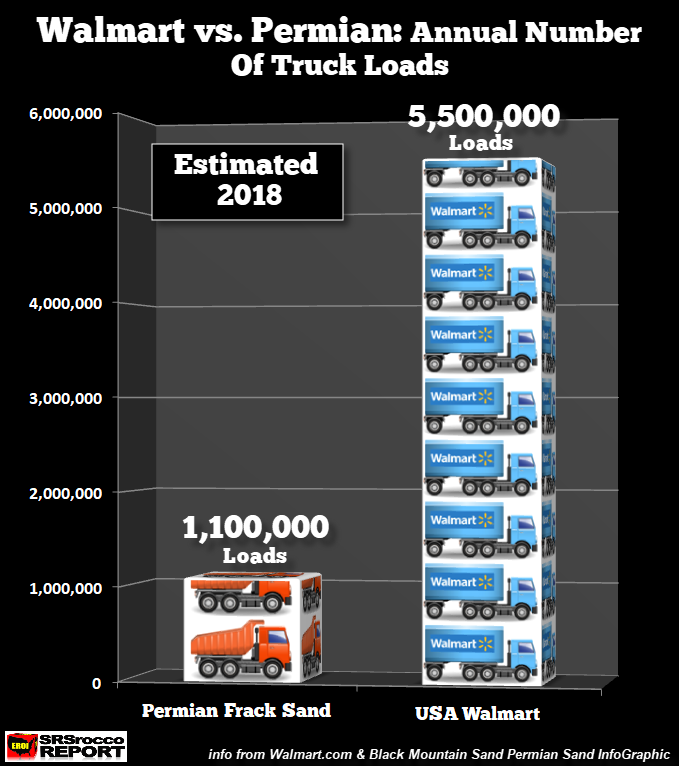 To provide the frac sand to produce shale oil and gas in the Permian this year, it will take 1.1 million truckloads or 20% of the truckloads to supply all the Walmart stores in the United States.  Over 140 million Americans visit Walmart (store or online) every week.  However, the Industry estimates that the Permian's frac sand consumption will jump from 50 billion pounds this year to 119 billion pounds by 2022.  Which means, the Permian will be utilizing 2.6 million truckloads to deliver frac sand by 2022, or nearly  50% of Walmart's supply chain: 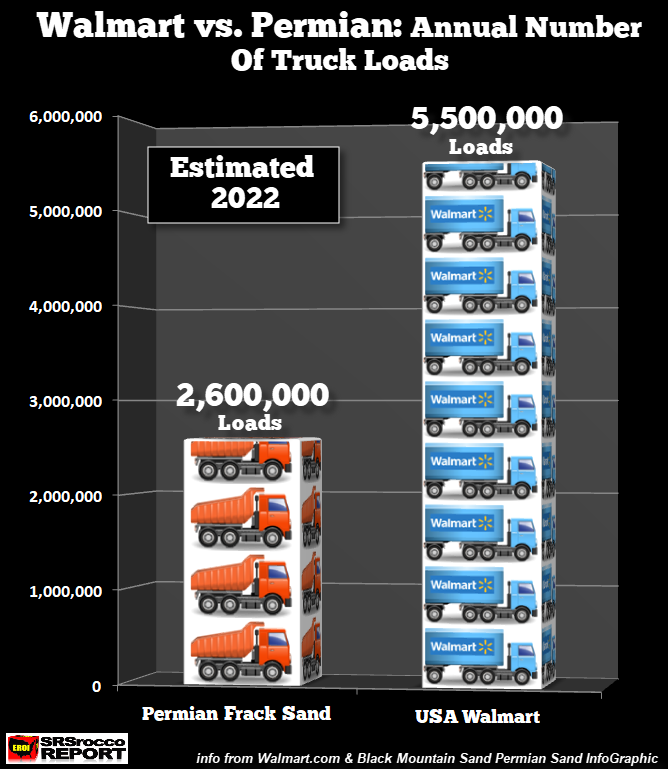 This is an insane number of truckloads just to deliver sand to produce shale oil and gas in the Permian.  Unfortunately, I don't believe the Permian will be consuming this much frac sand by 2022.  As I have stated in several articles and interviews, I see a massive deflationary spiral taking place in the markets over the next 2-4 years.  This will cause the oil price to fall back much lower, possibly to $30 once again.  Thus, drilling activity will collapse in the shale oil and gas industry, reducing the need for frac sand.

Regardless, I wanted to show the tremendous amount of frac sand that is consumed in the largest shale oil field in the United States.  I calculated that for every gallon of oil produced in the Permian in 2018, it would need about one pound of frac sand.  But, this does not include all the other materials, such as steel pipe, cement, water, chemicals, etc.

For example, the Permian is estimated to use 71 billion gallons of water to produce oil this year.  Thus, the fracking crews will be pumping down more than 1.5 gallons of water for each gallon of oil they extract in 2018.  So, the shale industry is consuming a larger volume of water and sand to just produce a smaller quantity of uneconomic shale oil in the Permian.

Lastly, I have provided information in several articles and videos explaining why I believe the U.S. Shale Oil Industry is a Ponzi Scheme.  From my analysis, I see the disintegration of the U.S. shale oil industry to start to take place within the next 1-3 years.  Once the market realizes it has been investing in a $250+ billion Shale Oil Ponzi Scheme, the impact on the U.S. economy and financial system will be quite devastating.