The trainwreck that is Italian politics has always been a hoot to watch. But this time around the implications to what happens in Rome are, as Trump would say, yuuuge.

You've probably seen the news-flow out of Europe.

Tasked with finding a suitable candidate to head a coalition between Luigi Di Maio's Five Star Movement and the far-right League headed by Matteo Salvini, a coalition, which I might add has to be scaring the living isht out of Brussels, has not been an easy task.

Firstly, they went and chose someone nobody has ever heard about.

Well, Italy has many "colourful characters" in politics, and that is what scares Brussels more than anything else. Draghi's worst nightmare must be sitting across the table from this guy discussing Italy's bill to Germany. 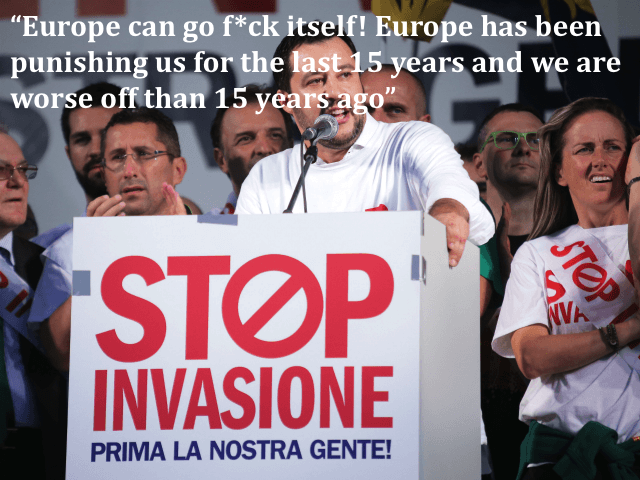 In case you're not up to speed on what these gents stand for here's a sampling from Matteo Salvini.

Slaves of the European Union? No, thanks! I can’t wait for Italy, with our government, to regain its sovereignty to defend the national interest in any way possible. Unacceptable intrusion from a European bureaucrat in Italy’s elections. The immigration policies and economic sacrifices imposed by the European Union have been a disaster and will be rejected by the free vote of Italians. European bureaucrats calm down. League will always defend our fisheries and the agriculture of Italy. Enough with the European standards that slaughter our businesses and our territory!

No! What this coalition needed was someone entirely vanilla, very unlike their own leaders, a nobody, a perfectly useful idiot.

And so they picked Giuseppe Conte.

Who, I hear you say?

But poor Giuseppe didn't last very long. Heck, he was tasked with what was one helluva job — sugarcoating this...

In a 39 page draft copy this newly-formed lovechild of Italian politics set forth what they intend to achieve. I'll spare you all the foreplay and go straight to the intercourse.

Since everything is relative, it's important to understand the debt relative to size of the economy. 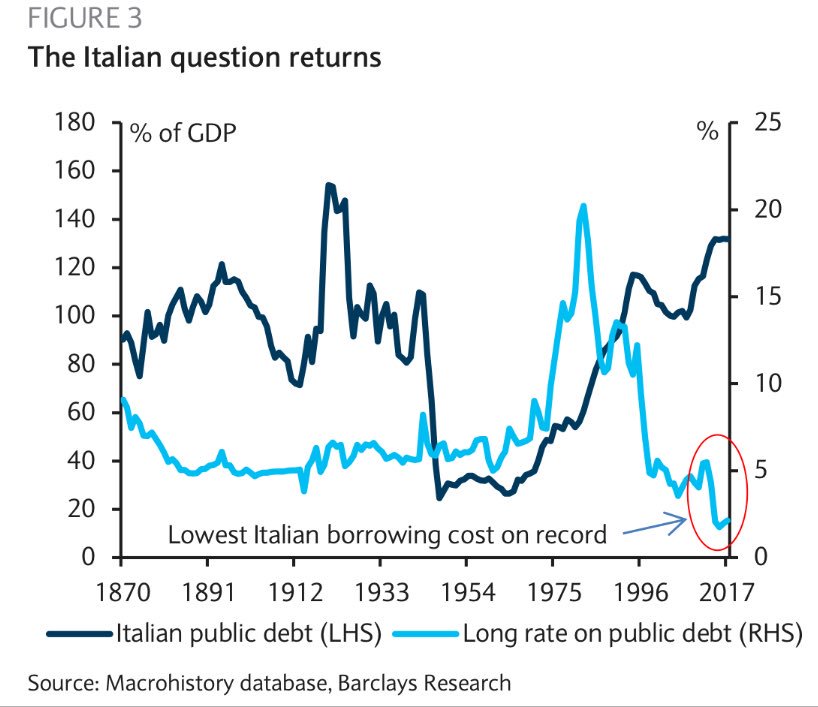 Italy's clearly a dog, with debt now bumping up against that "dear lord are you for real" level of the 1920's while its borrowing costs have been sniffing the backside of a dog called zero.

And so long as those borrowing costs stay absurdly low (or even turn negative) the aggregate debt burden doesn't really matter. It is, you'll notice, the cry of the triple D (debt, deflation, and demographics) crowd.

And maybe they're right. We're not convinced. The world is much more dynamic and the triple D narrative works only in a world where trust in the issuer remains.

And that's where we part ways because, as I have stated many times, the increase in global political disharmony cannot coexist with coordinative and collaborative global economic policies.

To highlight my point, consider that as we watch this Shakespearean tragedy unfold, we do so while watching the Fed tightening monetary policy. Whoa, boy!

And this means that when (or indeed if) the Fed is called upon by the ECB to open swap lines as it did back in the GFC the odds aren't so good they'll be accommodating. Which means there is but one counter party here.

And I can promise you this...

When the ECB suits sit down to sip their $10 Perrier and nibble on foie gras know that this isn't lost on them. They, after all, are THE counter party in this gig. 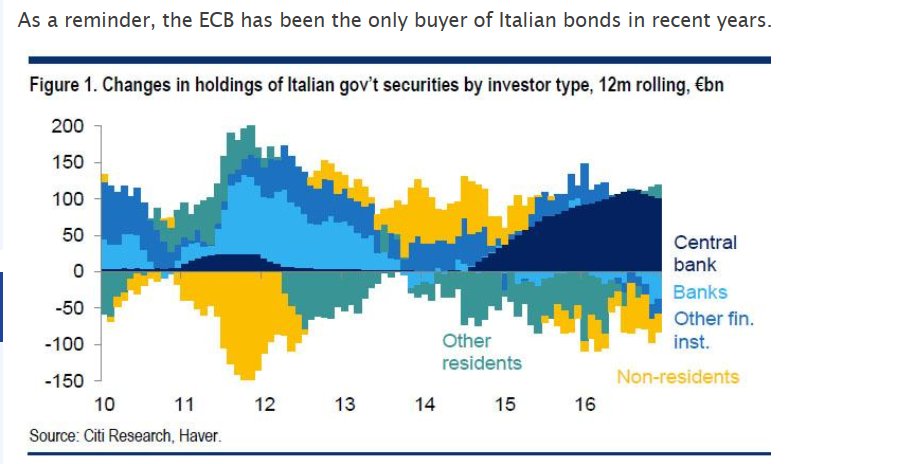 Who else owns these hot potatoes? 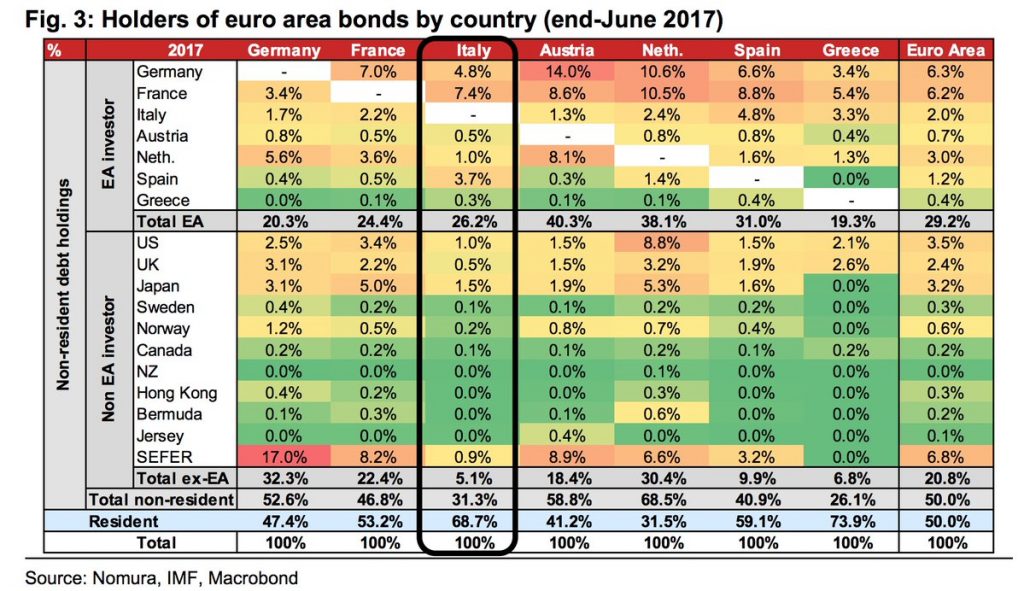 Sheesh... look at that. Only 5% of Italian bonds are held by non-EU investors. 5% folks!

That's nothing... and in case you haven't put two and two together, it means that Draghi's QE cannot end.

In fact, we have Banque de France Governor Villeroy de Galhau recently confirm that the European Central Bank intends to continue reinvesting its portfolio of securities indefinitely. Of course they do. It's not like they've much of an option.

That is how it's been now for a decade. And sure we've had a lot of angst, wringing of teeth, and gnashing of hands across Europe.

But now we have a coalition government that's been elected on a platform of promises to renege on debt, exit the EU, close the borders to the waves of refugees, and kick the euro to touch.

It's worth noting that Italy has been at the forefront of the immigrant invasion from North Africa — something governed by Brussels, which really means Germany.

And Italians are happy about it in the same way you'd be happy with genital mutilation. It was nearly 2 years go that we discussed where Europe was headed... and why the trend in Europe and the euro was decidedly set.

Today we're moving into the next phase of this.

The ECB have a means of dealing with pesky, recalcitrant upstarts like our pasta-eating, sunglass-wearing, espresso-drinking friends.

Strip away all the bluster and noise and it's clear that the nuclear weapon in the ECB arsenal is their ability to manage sovereign bond spreads and the liquidity in member states banks.

And when I say the ECB, I really mean Germany. The tension politically is a direct result of this... 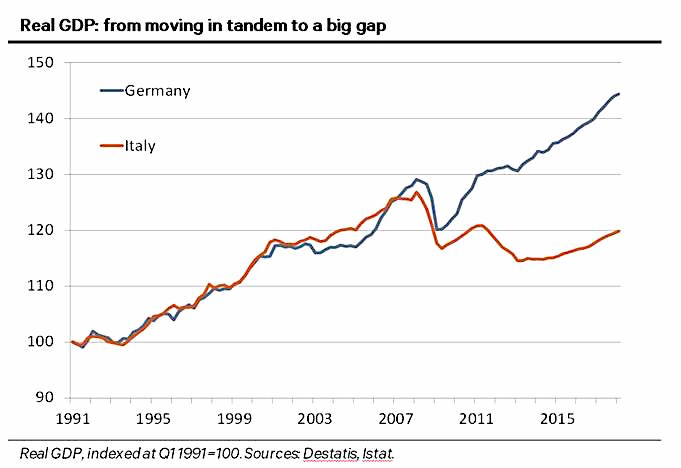 The significant differences between the two economies, however, isn't reflected in their respective credit markets. Or at least hasn't been for some time. Why?

Well, we've got the foie-gras-eating crowd who are backstopping the weaker members of the EU. When you realise that there is a big brother backstopping default risk, why bother pricing risk at anything other than a small spread over bunds?

And as long as everyone is getting along and pretending everything's fine and dandy, that's reasonable. Sort of.

But now with Mr. "F*ck Europe" at the helm the markets are quickly reprising risk. "Maybe it's possible someday. I guess it could happen" risk has just become "Bloody hell! Mary, quick! Grab the survival kit and the kids, we've gotta get outta here!" real risk.

In a brutal move Italian bond spreads over German just got up out of bed in a hurry. 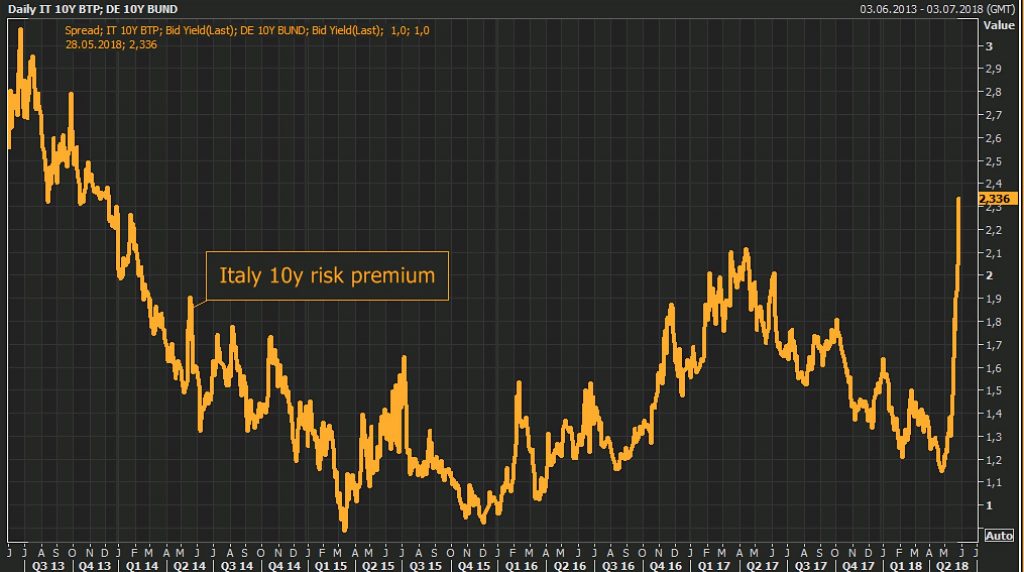 In truth, though, don't let the chart above scare you too much. Hell, back in 2011 BTPs were around 7%... so we've still a long ways to go. And as Julian Brigden correctly points out:

And Julian is, of course, correct.

And so let's take a gander over to look at what the 2-year's spread is up to. 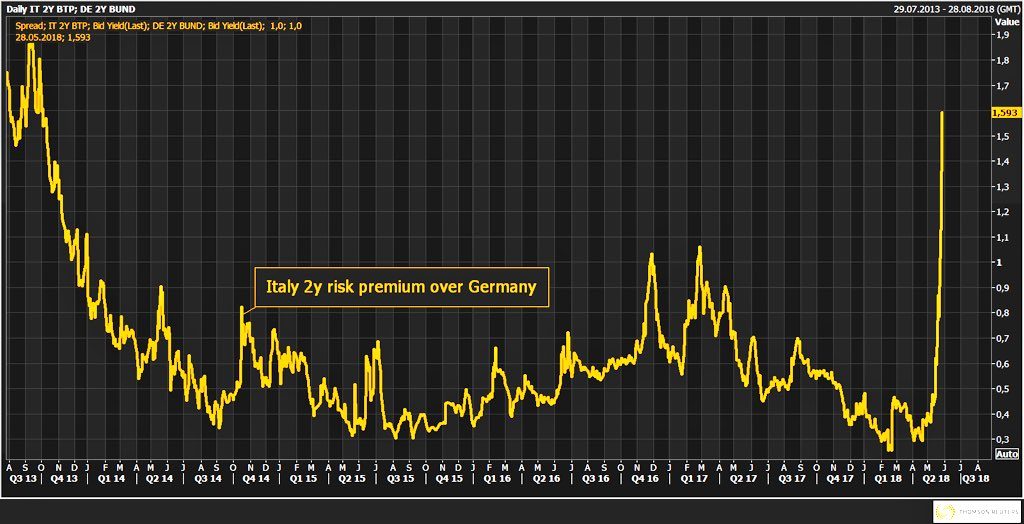 So we can see the pressures mounting and markets are reacting, but within context we've hardly seen anything yet.

What we do know, however, is that an Ital-exit would be a big deal for Brussels since Italy is the EU's third largest economy.

Not only would it ensure spittle-induced ranting from the pointy shoes in Brussels. It would in all likelihood spell the end of this fustercluck of an experiment that is the single currency.

It leaves us in a situation where the levers of control are increasingly shifting towards market forces as those in power find that their very actions designed to change the course of trend serve only to further undermine their efforts.

Divergence Between Bond Yields: Gasoline on the Fire

In what is truly an insane setup consider that as I write this, Italian BTP's yield less... yes, less than US bonds across maturities.

Think about that for a minute.

You're looking at bonds from a terminally bankrupt country, where the only hope of having those bonds ever be repaid at par involves them remaining in the EU — an increasingly contentious idea. And those bonds are priced in a currency that may well NOT make it another ten years.

And they're paying you less than US treasuries.

Now, I'm well aware of the problems that the US has but this is nuttier than a granola bar. 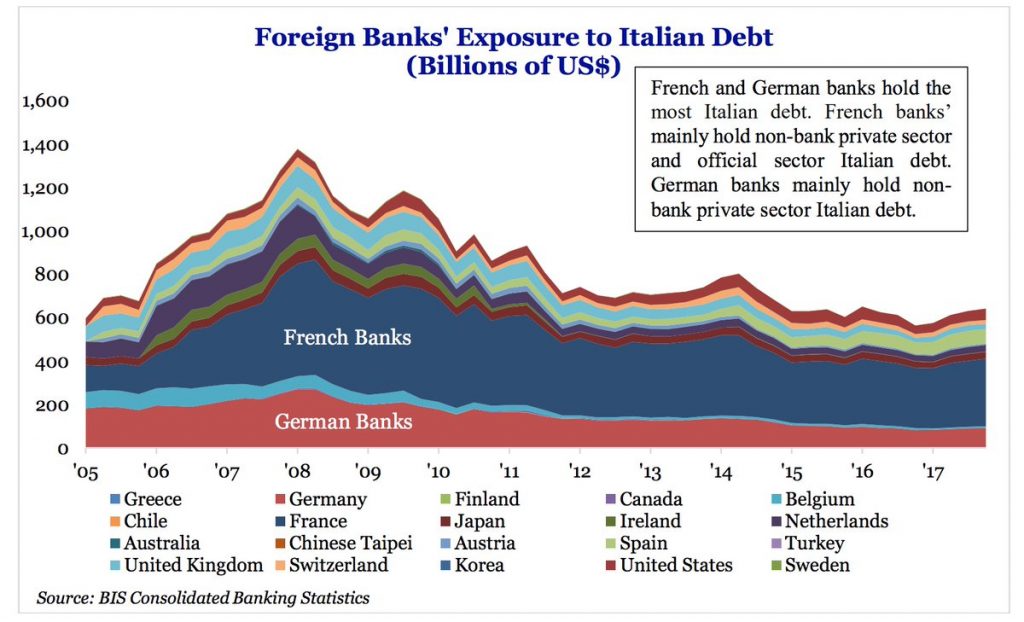 Which explains why Germany's biggest lender looks like it has incurable cancer.

Of course, added to these problems in the Italian debt markets, Deutsche Bank (DBK) holds a whopping €48.3 trillion in notional derivatives on their books and nobody seems to know what that particular daisy chain looks like. 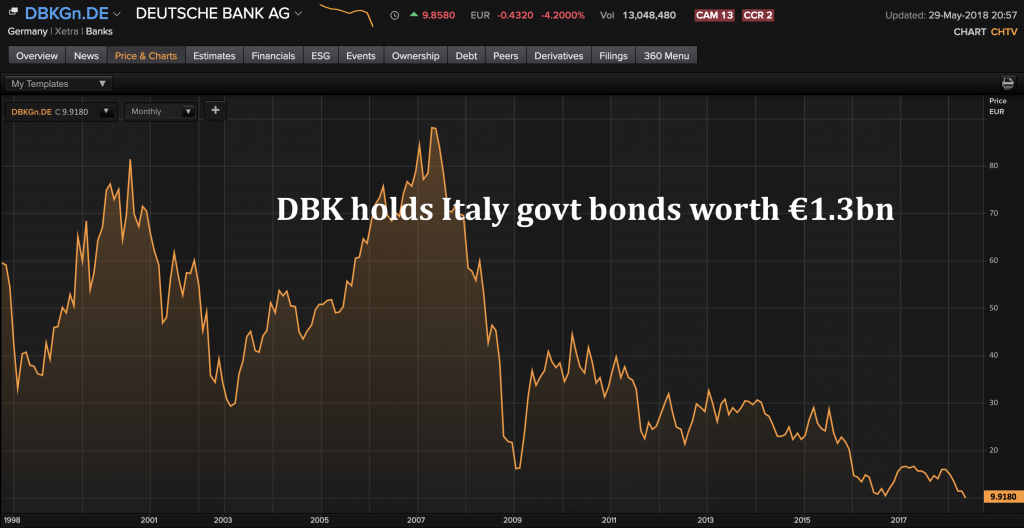 Is Deutsche Another Potential Lehman?

Well, let's think it through.

Firstly, the ECB has had ample time since the GFC to think about this. And not only that... they've had more than enough experience at the helm of the QE boat.

So we can expect them to gun the motor even harder should they need to.

Secondly, Deutsche Bank is unlike Lehman in that for starters it's 5x the size of Lehman.

The unfortunate truth is we don't need Deutsche Bank to fail for all sorts of isht to blow out in directions we can't fathom.

All that needs happen is for fear to take hold and counter parties to Deutsche to start pulling the rug, which itself sinks a couple smaller undercapitalised banks.

Now, you'd be forgiven for thinking it may end there, which brings me to Joe Sixpack who's sitting there, asking himself the age old question...

This is an opportune time to wind the clock back to what took place just over 2 years ago.

Bail-in provisions came into effect at the beginning of 2016. As Reuters published at the time:

The key new rule is that no bank can be bailed out with public money until creditors accounting for at least 8 percent of the lender’s liabilities have stumped up. So-called bail-ins typically mean wiping out creditors’ investments, slashing their value or converting them into shares in the bank. Uninsured depositors could get caught along with professional investors.

Right now Europeans are complacent. Why, I cannot fathom.

Because they're closer to the action, institutions tend to better understand the complexities involved. And well, they're already speaking by dumping BTPs and Italian banks faster than Harvey Weinstein from a social guest list.

And so while we can all chastise fund managers for holding what will be worthless sovereign bonds, they're big boys, right?

What should be noted by Joe Sixpack is that their money in the banking system is precipitously close to having its own Cyprus moment, and THAT, when spread across Europe, has the very real potential to turn a complacent, even numb populace into something rather less sanguine.

“There’s an old Italian saying: you f**k up once, you lose two teeth.” — Tony Soprano

this topic as well. Go here to access them (free, of course).