Shortly after former Cambridge Analytics CEO Alexander Nix learned British media was reporting on allegations about his firm's role in the leak of Facebook data, he allegedly withdrew $8 million from the company... and investors are not happy. 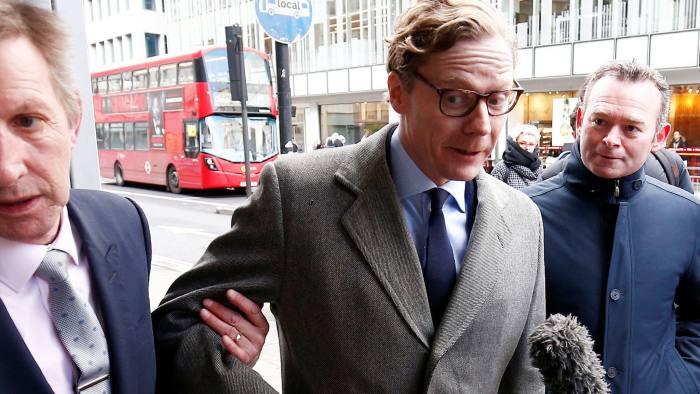 In a lengthy and detailed story in The Financial Times, Nix is accused of making off with the funds right before the firm collapsed into liquidation; and the investors who had backed a potential rebranding of the firm are pressing Nix to repay the money.

The investors said Emerdata, a company set up last year to acquire and rebrand Cambridge Analytica and a related company, SCL Group, had raised $19m from powerful international investors in January to expand the company’s services and bid for more commercial work.

The money ran out quickly, the people said, because of outstanding bills to advertisers and other suppliers, and because of the alleged withdrawal by Mr Nix. According to some of the people, Mr Nix has indicated that he intends to repay part of the money. One person added that Mr Nix said the withdrawal was made in exchange for unbooked services.

Bankruptcy filings in New York show that Cambridge Analytica received an $8.8m loan from Emerdata before it entered administration, though it is not clear what the loan was intended for.

Documents show the debt is classified as an unsecured “non-priority” loan that might not have to be returned.

But the story gets even more intriguing when one finds out who the 'investors' in the apparent rebranding of Cambridge Analytica's "data-science-as-a-service" business model...

Company filings in the UK show Emerdata earlier this year issued nearly 2m shares and added several new directors to its board including Rebekah and Jennifer Mercer, the daughters of hedge fund billionaire and prominent Trump supporter Robert Mercer.

As a reminder, the prominent conservative billionaire investor, Trump campaign supporter and patron of Steve Bannon, Robert Mercer, stepped down as co-chief executive and board member of the world's most profitable and secretive hedge fund, Renaissance Technologies, on January 1, 2018.

Additionally, Johnson Ko, executive director of Reorient Group, was also added as a director of Emerdata in January. Mr Ko is a business partner of Erik Prince, another Trump associate and the founder of private mercenary group Blackwater, at the security firm Frontier Services Group.

And judging by the second half of The Financial Times' story, Cambridge Analytica was planning a full resurrection as documents seen by the FT confirm that a holding company was established to acquire Cambridge Analytica and SCL Group, which had previously focused on defense (which explains Erik Prince's influence) and political work (which explains the Mercer's interest), including Donald Trump’s presidential campaign. These documents and a private placing memorandum set out plans to raise about $30m to pitch for more commercially-related work and develop a “high-volume core business” with off-the-shelf data-targeting products.

“Governments have access to vast quantities of data; on both their own citizens and foreign nationals. These data can be used to help governments identify, segment and target key audiences for campaigns of information or influence.”

Cambridge Analytica also formed a working group of senior ex-military personnel and government executives to identify products and services most relevant to government clients, according to the documents.