The specified file public://inline-images/https_%2F%2Fs3-us-west-2.amazonaws (7)_4.jpg could not be moved/copied because no file by that name exists. Please check that you supplied the correct filename.

Capital flight to Germany, the Netherlands, and Finland is in full swing. These sums cannot be paid back. 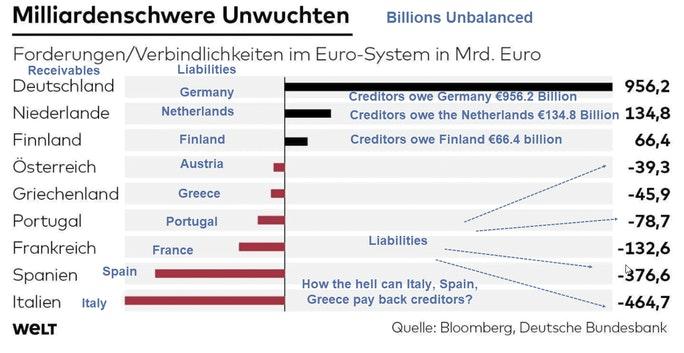 I have commented on Target2 liabilities before.

Perhaps a Mish-modified translation from the Welt article Imbalance in the Euro System Reaches a New Record will ring a bell.

The central banks of Germany's euro partners Italy, Spain and France owe the Bundesbank almost a trillion euros . This is a new high. - more than ever before. Tendency continues to rise. There is no security for this money.

Creditors owe Germany, the Netherlands, and Finland over €1.157 trillion.

In May, Italian liabilities increased by almost 40 billion euros.

"Capital flight to Germany is in full swing," says Hans-Werner Sinn, longtime head of the Ifo Institute and one of the most prominent economists in the Federal Republic.

Originally, Target2 was designed to facilitate cross-border transactions within the eurozone. The system achieved this goal. From the point of view of critics, this means that the Deutsche Bundesbank provides long-term unsecured and non-interest-bearing loans to the central banks of other eurozone countries , especially the central banks of southern countries Italy, Spain and Portugal.

Target2 is a fundamental problem of the Eurozone.

Germany will pay one way or another. Here are the possibilities.

Those are the alternatives.

Germany will not allow number 1. It is unreasonable to expect number 2 to last forever. The only door left open is door number 3.

The best move would be for Germany to leave the eurozone. Germany is in the best shape to suffer the consequences.

Unfortunately, the most likely outcome is a destructive breakup of the eurozone, starting in Italy or Greece.