The specified file public://inline-images/https_%2F%2Fs3-us-west-2.amazonaws_11.jpg could not be moved/copied because no file by that name exists. Please check that you supplied the correct filename. 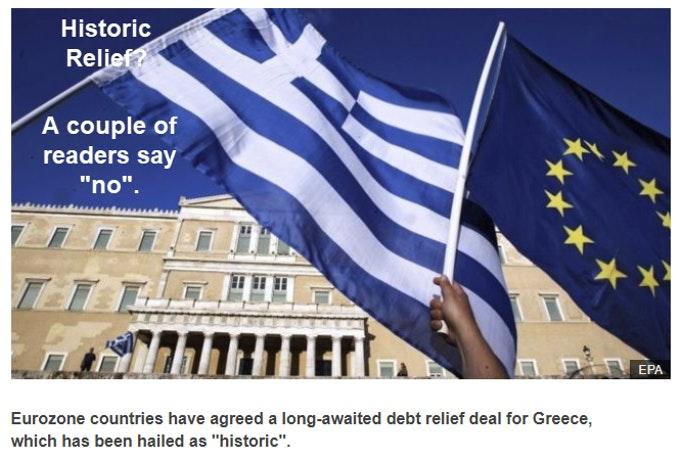 This was another can-kicking announcement according to Eurointelligence.

Here it is. Finally, a deal on debt relief for Greece. It is a fudge of sorts, but a deal that ends the eight-year-long Greek debt crisis - for now. These are the main components of the deal:

There is no growth clause, no interest-rate cuts, no major buyback programme. This is not debt relief in the way the IMF defines it, but debt relief of the kicking-the-can-the-road variety.

It also leaves Greece with a significant exposure to IMF loans. Even if Greece were to use the €3.3bn to buy back IMF loans, that still leaves €7.1bn to be repaid by 2024.

The IMF abstained almost entirely from the debate as it is now officially leaving the programme and will only participate in the post-memorandum oversight, writes Kathimerini. Christine Lagarde refused to make any statements about Greece. What this means for the IMF role after the programme ends is yet to be seen.

So this is it, after eight years, three bailout programmes and endless eurogroup meetings. And with debt nearly at 180% of GDP, there is still the potential for things to turn wrong. But for now, everyone seems happy.

Reader Lars, from Norway, offered his assessment of the situation this morning via Email, to me and Egon von Greyerz at Gold Switzerland.

It's hard to keep a straight face these days. Greece is now out of the crisis according to the EU. And the MSM seems to go with that narrative.

Loan servicing has been kicked down the road som Greece will stay a debt slave for many, many years. Most focus on debt as a percentage of GDP. That's not the correct place to start. Compared to the productive share of the Greek economy, it's game over. Greece will never raise under this debt burden. New debt is required to create growth, but who will lend to a nation loaded with debt. So investments will have to be 100% equity.

Nobody looks at the dynamic picture. What will things look like in 10 years time? Same as in 2010.

It's sad that this type of propaganda is spread.

With everything included, Greece has a public debt of close to €500 billion (contingent liabilities included) for a private sector of €80-90 billion. The banks are filled sky high with Non-Performing-Loans. Youth employment is over 30%. What kind of future is that?

Egon responded: "Greece is now totally enslaved by Brussels. The only way for the Greeks to get out of slavery is to revolt by reneging on all EU/ECB debt and launching a new Drachma. It will come."

No One Looking Ahead

No one has bothered to ask what happens to Greece, Italy, or the Eurozone in general, in the next recession. Whatever the recession possibilities are in the US, they are far greater in the EU.

Trump's tactics are such that an EU recession can happen at any time.

I envision a destructive breakup of the Eurozone, but the trigger will be pulled by Italy, not Greece.

On may 25, I posted an email from Lars in which he details why debt-to-GDP ratios understate the true nature of the problem. For discussion, please see Fed's Dilemma: Debt-to-GDP Ratios Dramatically Understate the Debt Problem.