The Future of Medicine: Boost Your Health, Mind, Vitality, Mood and Athletic Ability with Light

If there was a pill which could boost your health and vitality, sharpen your mind and supercharge your athletic abilities … you’d take it, right?

Especially if there were no negative side effects … and the pill was cheap?

Let’s jump right into the scientific proof that this approach is incredibly powerful for a vast range of conditions. We will link to the scientific studies, and note the academic institutions with which the researchers are affiliated.

Top U.S. Olympic athletes state that PBM helps their performance. See this video, and then watch this one.

Many studies show that PBM can assist in athletic performance:

Good for the Brain

Good for the Skin

“In dermatology, LLLT has beneficial effects on wrinkles, acne scars, hypertrophic scars, and healing of burns. LLLT can reduce UV damage both as a treatment and as a prophylaxis. In pigmentary disorders such as vitiligo, LLLT can increase pigmentation by stimulating melanocyte proliferation and reduce depigmentation by inhibiting autoimmunity. Inflammatory diseases such as psoriasis and acne can also benefit.”

Studies have shown many other beneficial effects from PBM, including:

Indeed, an FDA scientists said at a recent conference that PBM showed positive effects on virtually every health condition studied so far.

(And the articles listed above are just a sample … I have collected hundreds of other links to scientific articles on the health benefits of PBM. But spamming you with links would be boring. And for those who want to read more, scientists are writing entire textbooks on the topic.)

How Was This Discovered?

“The father of phototherapy is Niels Ryberg Finsen, who first used sunlight, and then red light, to treat patients with smallpox in the 1800’s. He received a Nobel Prize in 1903.”

In 1967, professor of surgery at Pazmany Peter University in Budapest named Endre Mester experimented on rats and mice to try to induce cancer with lasers. He shaved the mice, and then shot a red laser at them. To his surprise, the red laser didn’t induce cancer … instead hair grew back faster on the animals.

In the 1990’s, NASA ran experiments to see if LED lights could help plants grow onboard the space shuttle. But the astronauts soon noticed that the lights helped their wounds heal more quickly.

Evolutionary Basis for the Health Benefits of Red Light

What possible mechanism could explain the incredibly diverse positive effects from PBM? What possible evolutionary explanation is there for this treatment?

Our bodies evolved to consume certain materials to stay healthy. For example, we evolved to eat protein and drink water … so we need both to maintain health. Scientists have recently learned that our bodies also evolved to consume omega 3 fatty acids, and as mentioned above, to make Vitamin D from UV light.

The sunlight shining on our ancestors’ and our bodies is comprised mainly of red and near infrared light between around and nanometers: 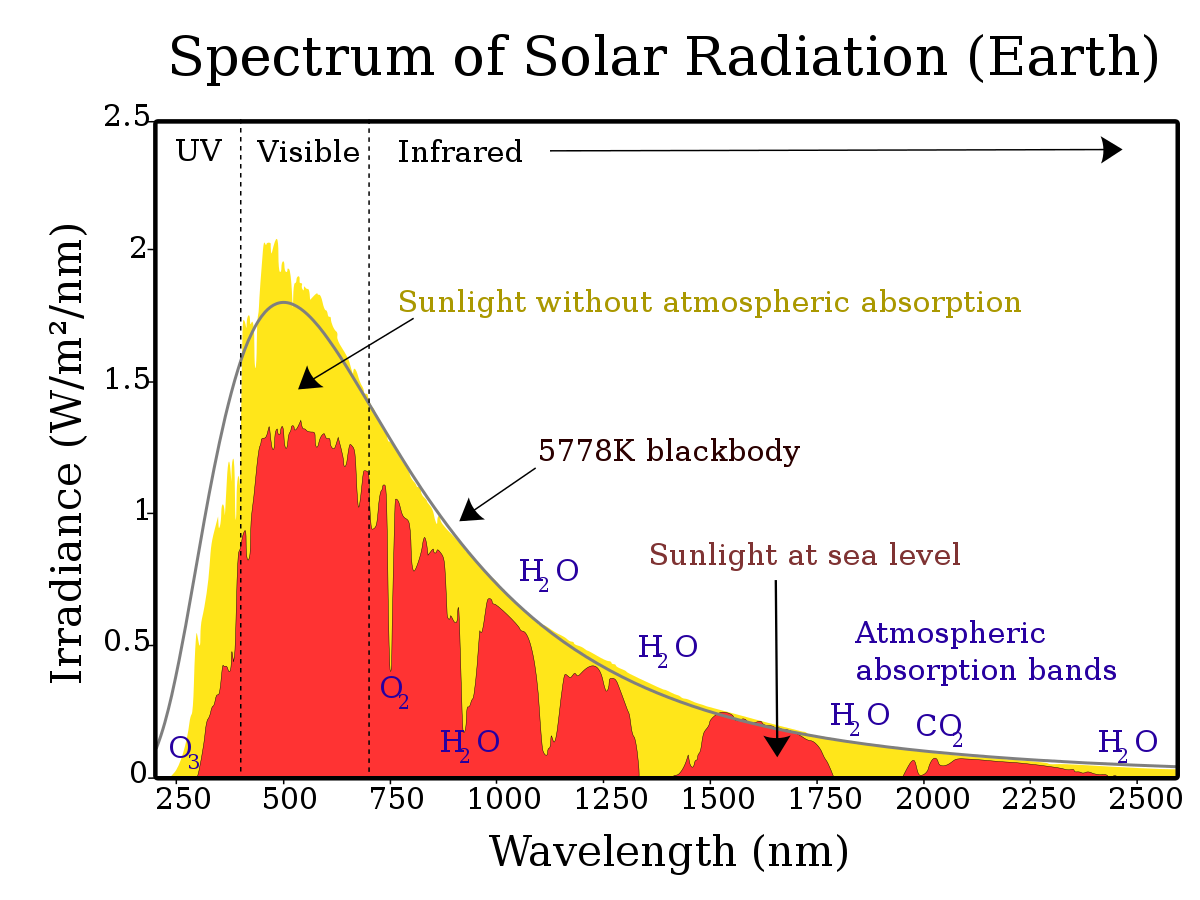 As NASA discovered with its red light experiments, red light helps plants to grow. And a new study from researchers from the U.S. and Finland show that virtually all life-forms respond favorably to light. They note:

“Veterinarians routinely use PBM to treat non-mammalian patients. The conclusion is that red or NIR light does indeed have significant biological effects conserved over many different kingdoms, and perhaps it is true that “all life-forms respond to light”.

Our ancestors were outside a lot. Many of them woke up shortly before dawn, and went to sleep shortly after dusk. So they got exposed to a lot of natural light … not only bright overhead white sunlight, but also the red wavelengths in the sunrise and sunset.

So maybe we evolved to get a lot of exposure to red light. The fact that plants and other organisms seem to be positively effected by red light would support that argument.

But that still doesn’t explain why red light applied to the inside of the body has beneficial effects. Specifically, red light shined inside the nose or – according to Chinese and Russian tests – directly into the bloodstream, have positive effects.

How could this be?

Scientists have proven that red light boosts the production of ATP by mitochondria, which are the powerhouses in our cells.  Mitochondria are sensitive to light. Specifically, a photosensitive chemical called cytochrome c oxidase is contained in mitochondria. Every cell in our body (other than red blood cells) contain mitochondria.

So virtually every cell in our body is wired to react to certain frequencies of light; the ones which trigger cytochrome c oxidase:

[T]he first enslavement step [of the bacteria which would become mitochondria by larger organisms which would eventually evolve into humans] was uptake of a host carrier protein through the outer membrane (OM) and its insertion into the inner, cytoplasmic membrane (IM) of a photosynthetic purple bacterium that escaped into the host cell’s cytoplasm from the food vacuole into which it was initially phagocytosed.

So while I obviously don’t know why PBM does so many helpful things, my hypothesis is that PBM taps into latent abilities of our mitochondria … that may have lain untapped for millions of years.

While this may sound whacky, the Harvard Medical School professor who wrote the book (actually several of them) on PBM, Dr. Michael Hamblin, told me “I think there is something in your theory”.

The important thing - no matter which evolutionary mechanism ends up being proven correct - is that there is a fascinating new type of medicine for health and wellness.

Postscript: In a separate article, I will discuss various ways to use PBM and get exposure to red light therapy.