The specified file public://inline-images/https_%2F%2Fs3-us-west-2.amazonaws (1).png could not be moved/copied because no file by that name exists. Please check that you supplied the correct filename.

Submitted by Mish Shelock of MishTalk 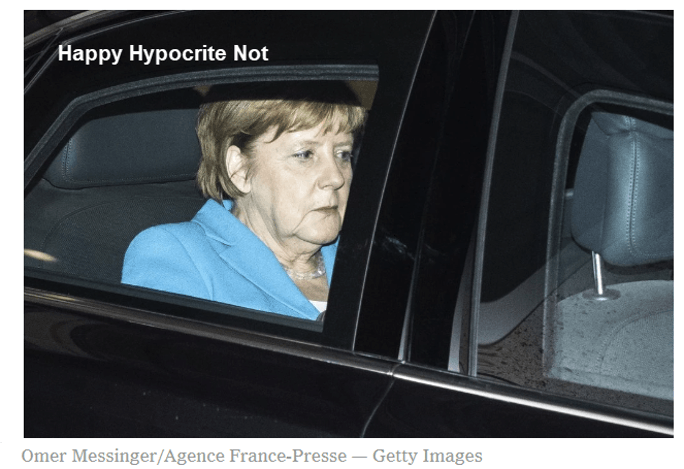 The subtitle to the feature image is quite telling.

Chancellor Angela Merkel of Germany leaving a meeting of the Christian Democratic Union in Berlin early Monday. “We share a common goal in migration policy,” the party said in a statement. “We want to order, control and limit migration to Germany.”

When did this become Germany's goal? And what about refugee camps in Africa, with no African nation agreeing?

Chancellor Angela Merkel, who staked her legacy on welcoming hundreds of thousands of migrants into Germany, agreed on Monday to build border camps for asylum seekers and to tighten the border with Austria in a political deal to save her government.

Although the move to appease the conservatives exposed her growing political weakness, Ms. Merkel will limp on as chancellor. For how long is unclear. The nationalism and anti-migrant sentiment that has challenged multilateralism elsewhere in Europe is taking root — fast — in mainstream German politics.

“Her political capital is depleted,” said Thomas Kleine-Brockhoff, director of the Berlin office of the German Marshall Fund. “We are well into the final chapter of the Merkel era.”

Eurointelligence has some pertinent comments.

It is pointless to discuss who is the relative winner of this standoff. Both will lose because they have demonstrated that they cannot work together anymore. What it also shows is that attempts to solve the refugee problem, still the number one political issue in Germany, are secondary to the rivalries between CDU and CSU and inside the CSU. The beneficiary of this mess is the AfD. And there are state elections in Bavaria in October.

The deal buys a truce that will last until October. We agree with Berthold Kohler's assessment in FAZ when he writes that Seehofer shares a large portion of the blame but not all of it. The CSU will increasingly blame Merkel - especially if they do badly at the elections. And the rest of the country has learned that the only way the two parties papered over the crisis is through the Kafkaesque legal fiction which they agreed last night.

Done Deal? No So Fast

CDU and CSU may have agreed to this deal but what about SPD?

Germany's conservatives have finally found common ground on migration policy, but skepticism is rife. The proposed measures have also raised concerns over the future of the open-border Schengen Area.

Now the ball is in the center-left court of the Social Democrats (SPD) — the other player in the grand coalition. Without a green light from the SPD, new measures can't be implemented. SPD party leader Andrea Nahles said there was "still a lot that needs to be discussed."

In forming the long-awaited new German government earlier this year, the SPD made its opposition to closed migrant centers at borders clear — a stance which was reiterated by several SPD delegates on Tuesday.

"Transit centers are in no way covered by the coalition agreement," Aziz Bozkurt, the SPD's expert on migration, told German newspaper Die Welt, adding that the camps were "above the SPD's pain threshold."

The repercussions of the planned border controls could be felt well beyond the borders of Bavaria. Now the future of open-border travel across the 26 member states of the Schengen Zone could be threatened by stricter controls on the Bavarian-Austrian border.

Responding to the German conservatives' deal, Vienna said it was prepared to take unspecified measures to "protect" Austria's southern borders with Italy and Slovenia if its neighbor turns back migrants.

One of the key points in the migration deal between Germany's conservatives is that asylum seekers will be rejected at the German-Austrian border if they are registered in another EU country.

How did Vienna respond to the CDU/CSU agreement? pic.twitter.com/t30KirQmrB

So, not only does the SPD have a say in this matter, so does Austria.

Merkel repeatedly makes deals that are not hers to make. In fact, this crisis stems from precisely that fact. "We can do this."

Let's not kid ourselves. After all, in which North African countries should the reception camps be built? The reactions so far have been predominantly hostile. And with which countries can you do business if you want to preserve human rights at the very minimum? And who will take care of refugees if they are prevented from moving on? The latest pictures from Algeria show what can happen. Thousands were literally sent to the desert, including children and pregnant women, where at almost 50 degrees Celsius (122 Fahrenheit) in the shade they died miserably, of thirst and starvation. Countries like Lebanon are already taking in more refugees than the whole of Europe put together. This is also part of the truth of a European policy of isolation.

On October 18, 2015, in response to the migration crisis Merkel brought upon herself, I wrote Swamped By Stupidity; Peak Merkel.

This was my comment at that time: "Angela Merkel, being the chameleon that she is, will soon change her colors for the simple reason she needs to. If she doesn't, it will certainly toll [the bell on] the end of her grand coalition".

The hypocrisy spotlight now shifts to the SPD.

It will be amusing to see what logic SPD uses to agree to send migrants back to Austria and to refugee camps in Africa when no African nation is in support of the idea.