How much gold did the two largest mining countries produce in history?  Well, let's just say that precious metals investors would be quite surprised to learn that the total cumulative gold production from the two leading countries is well over two billion ounces.  That is one heck of a lot of gold once we consider that only six billion oz of gold has been mined in recorded history.

Here are a few clues on the top two gold producing countries.  The country that produced the most gold in history experienced peak production in 1970 while the second largest topped out in 1998.  Interestingly, the largest gold producing country mined 1,000 metric tons (mt) of gold in 1970, and only one other nation has come close to supplying less than half of that amount in a year

According to the data from several sources, South Africa is the number one gold producer in the world by supplying nearly 1.7 billion oz of gold since 1871.  South African gold production started off slow at no more than 5,500 oz per year in the early 1870's, but by 1896, the country was mining more than 2.5 million oz (Moz) of the shiny yellow metal annually.  It is no wonder the British Empire decided to take over control of the Transvaal Colony in South Africa from the Dutch Boers.

From the article titled, British Takeover Of South Africa (Part 1), here is the following chronology on how the Rothschilds controlled the international gold sector via the British Empire:

Mid 1880s – Gold is discovered in the Transvaal, triggering the gold rush. Unlike many other newly-discovered gold areas, South Africa had no need to borrow from the Rothschild banks to fund these ventures. Rather, the profit from the diamond fields helped to fund the gold-mines in the Transvaal. And since the British had annexed the Transvaal, and like diamonds, the Rothschilds controlled the international gold sector, even establishing the daily price of gold at N.M. Rothschild and Sons, in London. In essence, both the diamond and gold sectors came under British/Rothschild control from the onset. South Africa was becoming of increasing importance within the Rothschild/British Empire.

The Boers still controlled the Transvaal, and the British aimed to wrest political control away from the Boers. London gave instructions to effect a military takeover of the Transvaal.

1899 – British troops gather on the Transvaal border and ignore an ultimatum to disperse. The second Anglo-Boer War begins.

1902 – Treaty of Vereeniging ends the second Anglo-Boer War. The Transvaal and Orange Free State are made self-governing colonies of the British Empire. 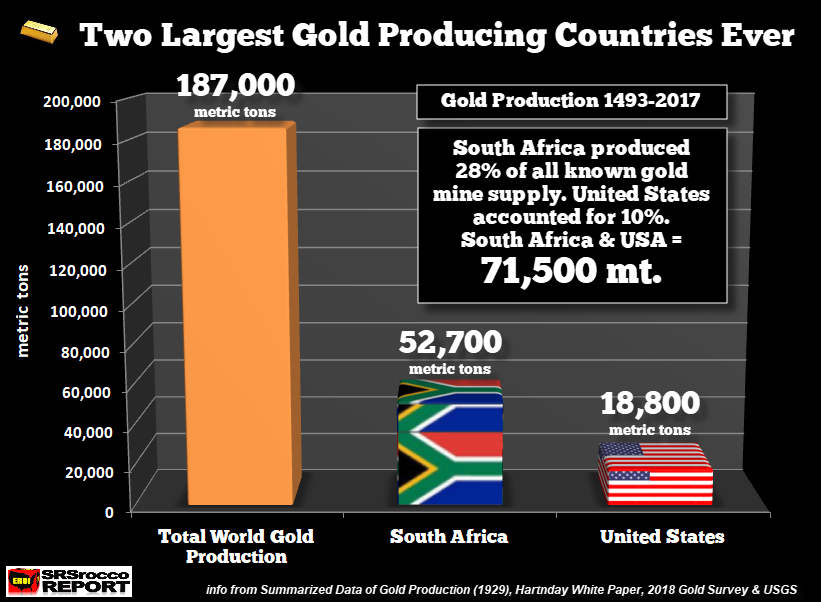 Thus, South Africa and the U.S. produced 71,500 mt of gold or 38% of known global mine supply.  Excluding the former U.S.S.R. and Russia, the country ranked third in cumulative gold production is Australia: 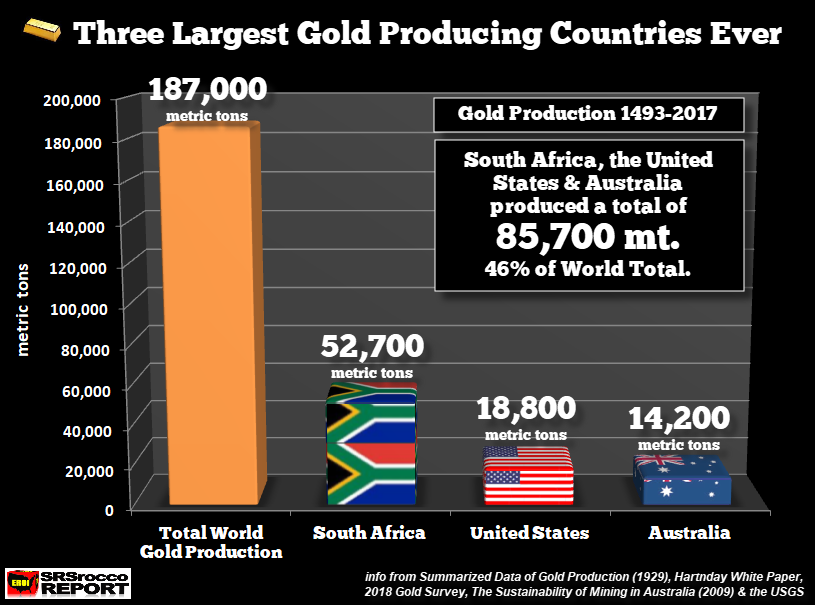 Now, the reason I excluded the former U.S.S.R and Russia has to do with the incomplete and questionable data provided by these two countries.  However, the "Summarized Data on Gold Production," published by the U.S. Bureau of Mines in 1929, estimated that Russia produced a total of 89 Moz of gold from 1801-1927.  Compared to the other top gold producers, we have the following:

In researching the data put out by the CIA in their "Soviet Gold Production, Reserves & Exports Through 1954,", mine supply increased significantly in the former U.S.S.R during the 1930's and after WW2.  However, after the collapse of the Soviet Union in 1989, gold production fell sharply.

To give you an idea of just how much gold these top producing countries mined in troy ounces, take a look at the following chart: 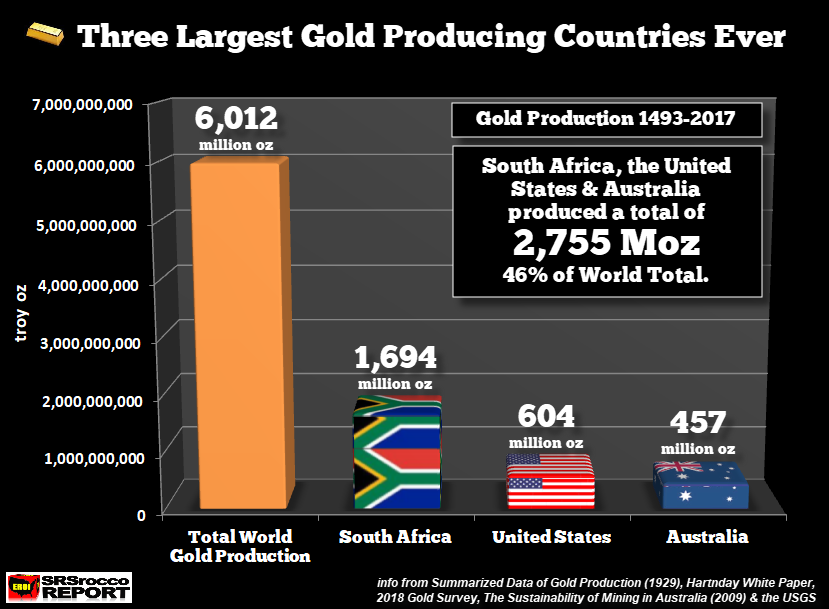 South Africa mined 1,694 Moz while the U.S. produced 604 Moz and Australia 457 Moz.  The total of these three countries is 2.7 billion oz or nearly half of the total cumulative global gold mine production.  Just think about this for a minute.  Of the 32,600 metric tons or 1.05 billion oz of current World Central Bank gold reserves, South Africa's production accounted for more than one and a half times this amount.

When I did the research, I knew that South Africa was likely the largest gold producer in history, but I was surprised to find out that one country, actually one small mining area, produced more than a quarter of all the world's gold.  Even the mighty California Gold Rush from 1848-1888 only produced 55 Moz of gold.

Unfortunately, only a very small percentage of investors have acquired gold and silver.  I imagine the number is now less than 1%.  While some in the Alternative Media Community believe this was a "Grand Conspiracy" by the elite, I rather think it was due to the wealthy's drive for profits and the public's desire for more goods and services than they could afford.

We must remember, most people would rather buy and use a nice car, boat, RV, and loads of high-tech gadgets than buy a lump of gold or silver just to look at it.  The public is "under-insured" and "over-burdened with gobs of stuff and crap."  Now, when I say, under-insured, I am not referring to just health care, but including all aspects of being prepared for HARD TIMES ahead.

Most Americans would rather spend their surplus funds on THINGS to use and do than on protecting their family when the SHYTE HITS THE FAN.