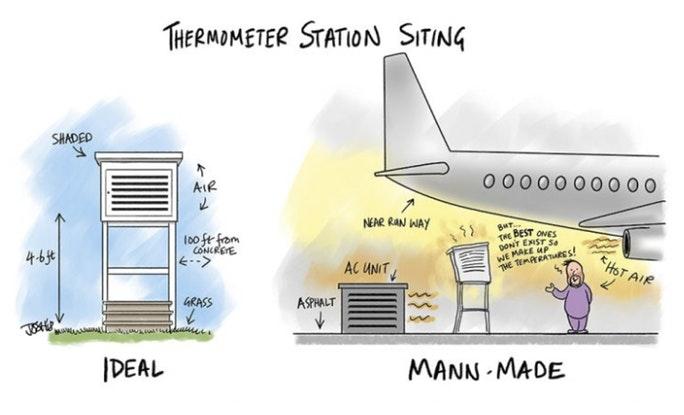 There's record heat, but why? How do we measure it? What's going on with sunspots? Blame the US? Answers below... 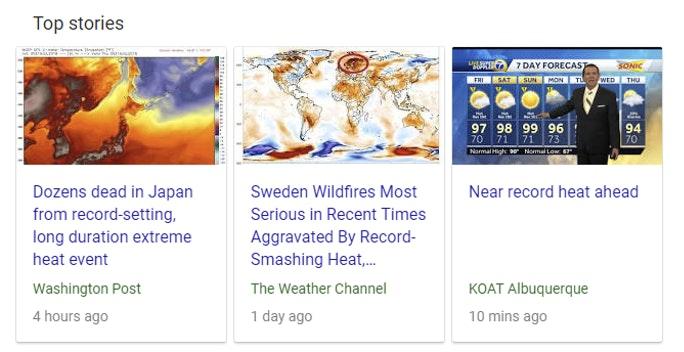 Yes, there's "record heat" thanks to the nonsensical way we measure temperatures.

Watts Up With That provides a humorous, but accurate, summation in Friday Funny: Josh on Mann-Made Warming.

In the last couple of weeks, record highs have been set around the U.S., particularly in the Los Angeles area, which I did a lengthy debunking of. Records were also set in Scotland, then denied by an errant Ice Cream truck, and also questioned in Africa. Josh is on the case to illustrate the one common denominator to all these high temperature records we’ve discussed here on WUWT.

For people who don’t believe this, or think we are just “making stuff up”…Here’s the official weather station at the airport in Rome, Italy. I wonder if the Pope has seen this? 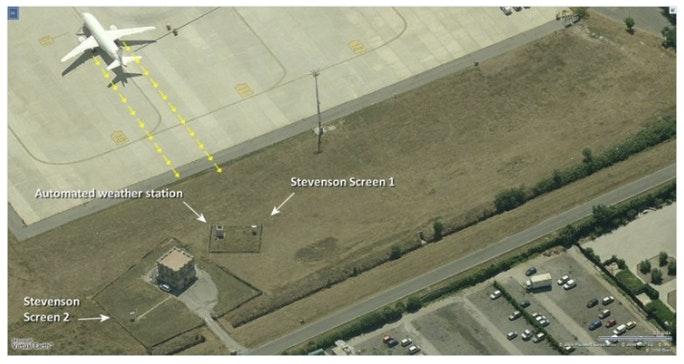 WUWT provides more examples including some in the US including LA and Burbank. Here's Burbank. 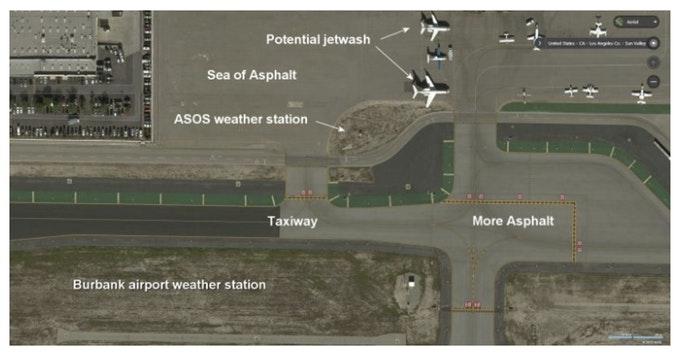 Yes, the weather station is virtually surrounded by asphalt runways, taxiways, and aircraft parking ramps. The likelihood for the station to get in the middle of a 400F jetwash is almost a certainty, being so close to taxiways with turns. This is a ridiculous place to measure for high temperatures.

Cities such as New York, Philadelphia, and Boston are prominent centers of political power. Less known: Their size, background ecology, and development patterns also combine to make them unusually warm, according to NASA scientists who presented new research recently at an American Geophysical Union (AGU) meeting in San Francisco, Calif.

Summer land surface temperature of cities in the Northeast were an average of 7 °C to 9 °C (13°F to 16 °F) warmer than surrounding rural areas over a three year period, the new research shows. The complex phenomenon that drives up temperatures is called the urban heat island effect.

Clearly, we are not accurately measuring the rise in temperatures but that does not stop nonsense lawsuits.

NYC said BP, Chevron, ConocoPhillips. Exxon Mobil and Royal Dutch Shell should compensate the city for the cost of mitigating the effects of global warming.

Judge Keenan wrote "Climate change is a fact of life, as is not contested by Defendants. But the serious problems caused thereby are not for the judiciary to ameliorate. Global warming and solutions thereto must be addressed by the two other branches of government."

This case was so asinine that I wonder why it was filed in the first place. The judge should have made the city pay all of the defendants' legal costs.

That would stop the nonsense.

JUST OUT FROM EIA: CO2 Emissions from US Electric Power Fell Last Year to the Lowest Level in 30 Years, Thanks #Fracking #natgas @EnergyTomorrow pic.twitter.com/LjlzTbxRnU

Last year the United States had the largest decline in CO2 emissions *in the entire world* for the 9th time this century. https://t.co/YxPRdXPiU4

Last year the United States had the largest decline in CO2 emissions *in the entire world* for the 9th time this century.

In Climate Agreement, Hypocrisy and Summits, LaCalle accurately writes "Decarbonization is unstoppable . Not thanks to a summit or due to politicians, quite the opposite. Thanks to competition, technology and research. Thanks to human ingenuity. Coal has been disappearing from the global energy mix for decades, despite – not to thanks to – governments. And the same is happening with oil."

But wait, what about the sea rise from melting ice in the antarctic?

Please consider The "Alarmist Gone Wild" Perspective of the Increase in Antarctic Snowfall.

A new study published in the journal Climate of the Past has some (small) good news as far as snowfall is concerned: it’s going up. Since the 19th century, snowfall across Antarctica has increased by about 10 percent. It isn’t nearly enough to offset sea level rise from ice melting, but the numbers are still impressive. As a press releasepoints out, the continent is packing on about two Dead Sea’s worth of new ice each year.

Since it’s unclear as to whether or not Antarctica is currently losing or gaining ice, largely due to glacial isostatic adjustment uncertainties, two Dead Seas worth of additional ice (on top of the 19th century accumulation rate) is a lot of fracking ice… If two Dead Seas worth of ice per year were disappearing from Greenland, it would be catastrophic according to the alarmists. We know this because Greenland is currently losing an estimated 186-375 billion tons of ice per year and this is described as catastrophic, despite its insignificance to the overall mass and volume of the Greenland Ice Sheet (GrIS). In Greenland, our friends at Skeptical Sciencedescribe this as “ominous”…

"On what planet?," asked WUWT.

At the current rate, the sea level will rise by 1.6 inches over the next 100 years if we stay on this path.

Mercy! We need a plan.

I am quite certain that spending $90 trillion on nearly anything would actually do opposite of whatever the intention was.

With that thought, let's move on to sunspots.

Sunspots are vanishing at an alarming rate. Let's investigate some possible implications.​ 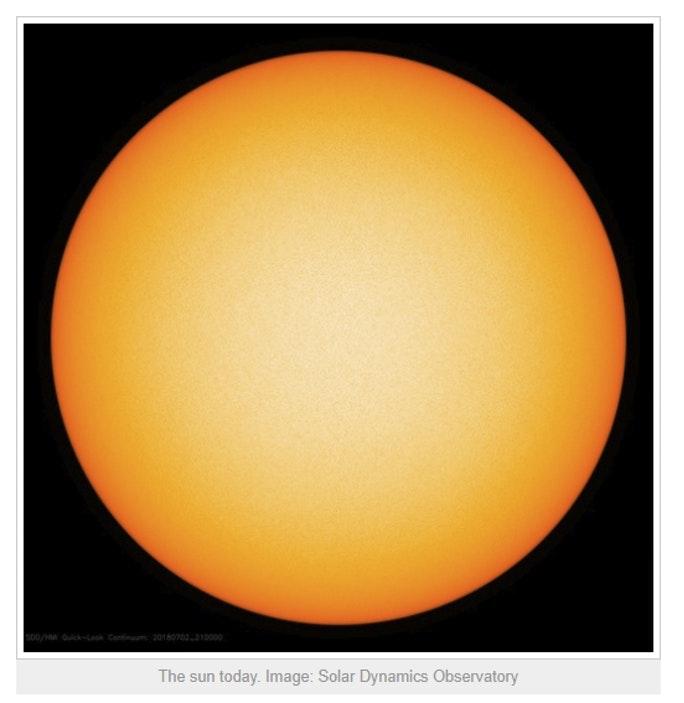 "Watts Up With That?" reports Quiet Sun: More than 3 months without a sunspot*.​

The title is very wrong, it's more like five days. But there have been about 100 days this year. Here are some details.

2 July 2018 – “The Belgian department of solar physics research (SIDC) says we are about to touch 100; that is, a hundred days in which we do not see spots on our sun,” says Italian meteorologist Dr. Carlo Testa.

During a time of few or no sunspots (a solar minimum) the Sun emits less energy than usual, says Dr. Testa. “According to some scholars, this situation could lead to climatic upheavals.”

Suffice it to recall, says Testa, that between 1645 and 1715 the most significant solar minimum of history, the Little Ice Age, occurred, bringing years and years marked by very strict winters that lasted until June.

Now several studies indicate that we’re headed into another Great Solar Minimum, says Testa. For some scholars, this is only a hypothesis, but we are seeing small signals that support this idea: namely, the most powerful strat-warming ever recorded in mid-February, the very very unstable Spring, and finally this summer that continues to limp along.

“What if the worst is to come?” asks Testa.

Sunspots are becoming scarce. Very scarce. So far in 2018 the sun has been blank almost 60% of the time, with whole weeks going by without sunspots. Today’s sun, shown here in an image from NASA’s Solar Dynamics Observatory, is typical of the featureless solar disk.

I am willing to concede - and always have - that man is responsible for a percentage of global warming (assuming global warming is actually happening).

Here is a better way of stating things: Man-made CO2, in isolation, all things being equal, would tend to raise temperatures. That statement should not be in dispute, by anyone.

And assuming it is happening, what percentages does one want to assign to natural cycles, sunspots or other solar activity like solar flares, volcanoes, changes in the earth's core, changes in wind patterns, ocean current changes, changes in earth's magnetic field, etc, etc, but also "man-made" global warming.

I do not pretend to know all the factors. No one else does either. And I highly doubt every factor has been tracked (or even can be!)

Correlation is not causation. Even if CO2 models correlate to change, are there more important factors (even natural cycles) that are coincidental to man-made CO2?

Where's the discussion on this?

Changes measured by the Swarm satellite show that our magnetic field is weakening 10 times faster than originally predicted, especially over the Western Hemisphere

Earth's magnetic field acts like a giant invisible bubble that shields the planet from the dangerous cosmic radiation spewing from the sun in the form of solar winds. The field exists because Earth has a giant ball of iron at its core surrounded by an outer layer of molten metal. Changes in the core's temperature and Earth's rotation boil and swirl the liquid metal around in the outer core, creating magnetic field lines.

"The main idea behind complex systems is that the ensemble behaves in ways not predicted by its components. The" https://t.co/jbetMJvKN1

That is a lengthy video, but a very important one. Henrik Svensmark's documentary on climate change and cosmic rays is one of the best believable explanations of global warming that I have seen.

Svensmark looks at background radiation coming from space, based on the earth's position in the Milky Way galaxy. His model accurately predicted prior ice ages and warming cycles.

I recommend watching the entire video. It is fascinating. One can also skip to the 30 minute mark or so for a shorter version.

The video should give everyone pause to think about the simple models the alarmists project.

Climate changes - ice ages and warming - have occurred over millions of years whether man was even alive.

It is beyond idiotic to map two variables, CO2 and temperature change (one of them extremely inaccurately), in an enormously complex system of thousands of variables evolving over hundreds of millions of years, to make a determination we need to spend $90 trillion to do something about it based on data from the last 100 years.

But that is precisely what the alarmists have done.

The sad thing about this discussion is that I am in favor of reducing pollution. Millions of people in China are suffering from both air and water pollution.

Acid rain is real. It has killed forests on the East coast.

It's the hype on global warming and idiotic proposals to stop it that I cannot stand.