TGIF – Trump, Tariffs and the Game of Monopoly – Why You Should Care

TGIF – Trump, Tariffs and the Game of Monopoly – Why You Should Care

Trump has now threatened to put a tariff on every single Dollar’s worth of goods we import from China, ratcheting up the Trade War talk to unprecedented levels. Of course, we’re still at just $50Bn and Trump never followed through with his threat to add $200Bn before doubling down to $505Bn, but he is still the President of the United States and you can’t totally ignore the things he says – no matter how much you wish you could. 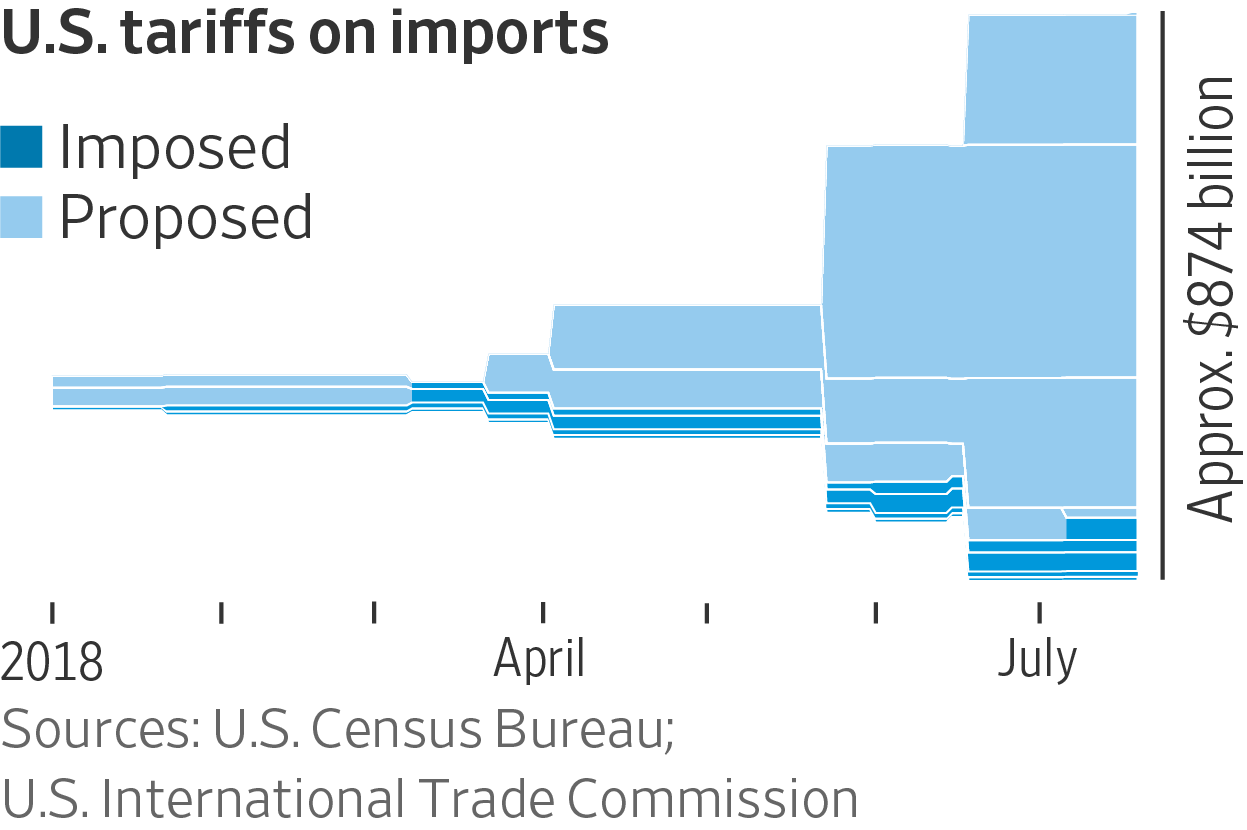 As you can see from the WSJ chart above, despite all the bluster, not much has actually happened so far but thank God for that as just the $50Bn that’s already been enacted is causing disruptions in Corporate Earnings and Economic Outlook – there’s no question that actually enacting $250Bn worth of tariffs, let alone $505Bn, would be devastating for the Global Economy and yes, for all of us, the Global Economy INCLUDES America!

Tariffs are a TAX on the American people and the real reason your President wants to put a 25% tax on $505Bn worth of Chinese Imports is that it will generate another $126.25Bn that he can use to give more tax breaks to his family and friends and it will allow his budget committee to project collecting $1.26 TRILLION in revenues over the next decade, which he can then use to either claim he has brought down the deficit or use to offset more military spending, etc.

And who pays this tax?  Attention Wal-Mart shoppers – it’s YOU!  Who do you think is the primary consumer of Chinese goods? $505Bn happens to be the exact annual sales of Wal-Mart and, if I had a TV show, I would challenge people coming out of Wal-Mart to find something they’ve bought that didn’t come from China. Of course there are plenty of things but you’d be very surprised how much is Chinese as well as, of course, the Dollar Stores, phones, etc.

So a tariff is just a fancy word for a tax on American consumers, especially the poor ones who can least afford it and no, they will not switch to “lower-priced” American goods because we don’t even have factories that make 90% of the stuff China ships to us and all a tariff does is make everything more expensive – there’s no incentive here for China’s competitors to LOWER their prices for consumers, is there?

This is why tariffs don’t work and, in fact, this is why tariffs are a disastrous policy that the World abandoned after the Smoot-Hawley Tariff Act of 1930 triggered the second wave of the Great Depression, reducing the EXPORT of US goods by more than 60% while making everything more expensive for US consumers – just at the time they were struggling to pay their bills.

1,028 Economists wrote a letter to Hoover begging him to Veto the Smoot-Hawley bill, much like almost every rational Economist now is begging Trump not to pursue this Trade War idiocy but, as I noted above, this is not about doing what’s good for the American people, this is about lining the pockets of Trump and his friends as well as creating a massive distraction from all the scandals and indictments within the Administration (just like Hoover!). As I noted yesterday – there’s just too much crap in a single day for people to keep up with – that’s how they get away with more crap…

If you want to bring back American Manufacturing Jobs your enemy isn’t China, it’s Technology! Manufacturing Efficiency in the US has never been higher and our Manufacturing Output has never been higher – it’s just that we don’t need humans to make these goods anymore.  What’s happened since the 80s is that first computers and now robotics have led to a 100% increase in US Manufacturing Production WHILE DECREASING the amount of labor required by 50% and that is not a trend that you can stop with tariffs – it’s the Rise of the Robots, Stage 1.

If you REALLY wanted to address this problem, you would put a tax on Automated Output so, in effect, a robotic factory worker would have to pay the same amount of taxes as the worker he’s replacing. That would make the manufacturer think twice before spending $1M on a machine that replaced 20 $50,000 workers, right? But that’s not what happens, what happens is the owner who was paying 20 people $1M a year and 7.5% matching Payroll Taxes ($75,000) and parking spaces and bathrooms, etc. now only spends $1M a year (maybe less) on a Robot and he gets to depreciate the robot!

The factory owner gets richer and the Government no longer collects the taxes from 20 former workers, who are now called “lazy welfare parasites” and the $350,000 they used to pay in taxes is NOT only NOT taken from the Factory Owners additional profits (in fact, we just gave him the biggest tax break in history), but now we’re going to put a 25% Tariff Tax on all the things the Welfare Parasites need to live on.  Wow, what a clever policy if your goal is to be the Sheriff of Nottingham (as I warned about in “The Dooh Nibor Economy (that’s “Robin Hood” backwards!)” back in 2007)!

What gets me angry at you people (and yes, I mean YOU, the person reading this specifically) is that you have ALL played the game Monopoly, which is essentially a game of pure capitalism and you all KNOW how that game works if you let one person end up being the Banker and they cheat and make up all the rules. Once they get a little bit ahead in the game, it’s over.

This is what happens when you elect a famous Monopolist to be President.  Trump has been playing Monopoly his whole life with real buildings and hotels and not only is he now in charge of the game as President, but he’s packing the courts and writing the rules and you KNOW he’s been a cheater his entire life – how do you think this is going to end for you and your family if you sit there and say and do nothing to stop it?

We know things are bad – worse than bad. They’re crazy. It’s like everything everywhere is going crazy, so we don’t go out anymore. We sit in the house, and slowly the world we are living in is getting smaller, and all we say is: ‘Please, at least leave us alone in our living rooms. Let me have my toaster and my TV and my steel-belted radials and I won’t say anything. Just leave us alone.’