The specified file public://inline-images/https_%2F%2Fs3-us-west-2.amazonaws_15.jpg could not be moved/copied because no file by that name exists. Please check that you supplied the correct filename.

Day after day, the newly minted hordes of 'Democratic Socialists' proclaim "free stuff" for all as their platform to grabbing the greater fool's marginal vote. 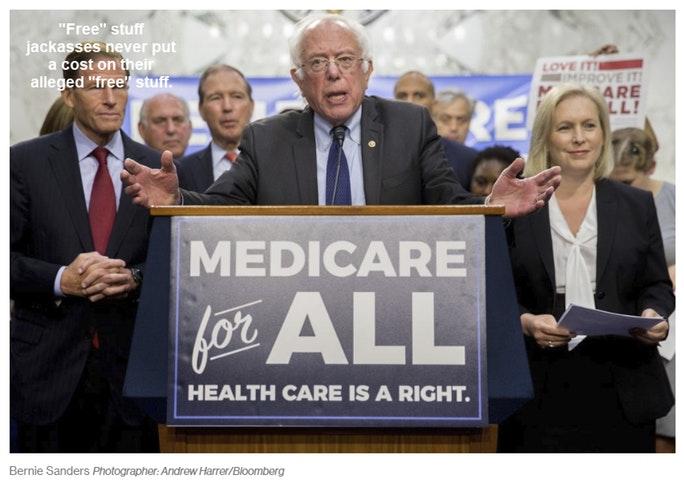 And finally, after Ocasio-Cortez' embarrassing display of ignorance, Mike Shedlock notes, cost estimates for "free stuff" are pouring in. The sticker price for "Medicare for All" is shocking.

"Medicare for All" sounds great. And every unthinking socialist wants it. But here's the deal: ‘Medicare for All’ Would Cost $32.6 Trillion Over 10 Years.

That's trillion with a "T."

The latest plan from the Vermont independent would deliver significant savings on administration and drug costs, but increased demand for care would drive up spending, according to the analysis by the Mercatus Center at George Mason University in Virginia. Doubling federal individual and corporate income tax receipts would not cover the full cost, the study said.

The Mercatus analysis estimated the 10-year cost of "Medicare for all" from 2022 to 2031, after an initial phase-in. Its findings are similar to those of several independent studies of Sanders' 2016 plan. Those studies found increases in federal spending over 10 years that ranged from $24.7 trillion to $34.7 trillion.

The idea that government needs to go all the way with "FREE" care is preposterous, and deadly.

The solution is in the opposite direction.

Get government OUT of healthcare, and return it to the free marketplace.

Mish exclaims, I am not at all surprised by the estimated cost but I do have a question: How do we afford $3.4 trillion a year for 10 years of "free" stuff?

And Medicare is just a start. There are proposals for free college tuition and free universal pre-kindergarten among other things.