Supply Chains Are Finally Getting an Update With Blockchain Innovation

Manufacturing has been globalized and supply chains have been extended beyond national borders and across oceans. Raw materials produced in one country are shipped to another country for processing into usable industrial materials, then to another to be turned into parts, which are then assembled into a finished product in yet another country. Although manufacturing has become so global, supply chain management uses the same tracking systems that have been using for sixty years even though so much has changed.

Blockchain  is a new technology which has the potential to streamline processes and combine all databases and information on supply chains into one database which is updated in real time whenever an entry is made, streamlining processes and giving live updates to all relevant parties on the chain simultaneously.

DeBeers, responsible for 30% of the world’s supply of diamonds, has announced that they will use a blockchain ledger to trace diamonds from mine to consumer. DeBeers will thus be able to certify that none of their stones are blood diamonds. Fura Gems will also use blockchain to trace their stones. As Vikram Pathak of Fura explains, “The way this is used for supply chain management, in the mining industry, is that right from the point of mining a stone – in our case a Colombian emerald or a Mozambican ruby – right through to the consumer’s pocket, the stone can be tracked.” Such a blockchain “provenance record” will also prevent synthetic stones from being passed off as natural.

Not just the most durable substances on the planet, but also perishable are now being tracked by blockchain. Last year Walmart, with the help of International Business Machines (IBM), began testing blockchain with its live food business. Walmart was able to reduce the time it took to trace a package of sliced mangoes from six days to 2.2 seconds.

Frank Yiannis, vice president of food safety for Walmart, explains that, "the way traceability is done today, each segment of the food system does it their own way. Most actually do it on paper or on systems that don't speak to each other, so you can never have a full view of what's happening in the food system." Walmart will use a chip with a private key, instead of a barcode, which interacts with Walmart’s blockchain ledger and provides the entire history of a live food product from grower to refrigerated display.

Avocados grown in Kenya can take 34 days to arrive in The Netherlands; 14 of those days can be spent waiting for information and approvals. The entire shipping process may involve 30 port officials and 200 communications among 100 people. Most of the documentation transferred between port officials involves faxes, phone calls, spreadsheets, emails, and paper carried by motorbike courier.

Tradelens, a previously announced collaboration between IBM and A. P. Moller-Maersk, has now enrolled 92 participants in its effort to orchestrate global trade. Tradelens gives every user its own blockchain node that operates in a manner similar to the way bitcoin allows users to send money without banks. Marie Wieck, IBM head of blockchain, believes Tradelens can cut shipping costs as much as 40%. Using smart contracts, produced by Clearway, the Tradelens document module, all parties involved in the shipping supply chain have a real-time view of all transactions. 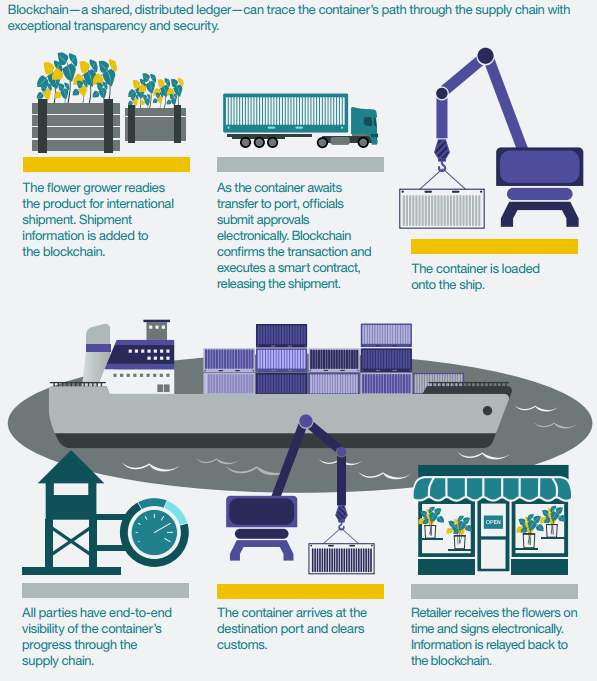 Until now blockchain technology has only been available to multinational corporations, but individuals and smaller companies may now have access to technology that will allow them to deliver anything anywhere by anyone they choose. PAKET proposes using blockchain to establish a package delivery ecosystem that will allow supply chain coordination of international transportation giants (like Maersk), delivery companies (like United Parcel Service) and last mile casual couriers (like Uber and Lyft). PAKET proposes that anyone can participate, benefit and profit. Using a secure token-BUL as collateral and compensation for the smart contracts established by and between participants. BUL will be stored in virtual escrow and paid when delivery is successfully completed or refunded if the smart contract has not been fulfilled.

“Airplane brought me a Popsicle,” says two year-old Jack Smith of Blacksburg, Virginia. A Hummingbird V2 drone operated by Alphabet’s Wing subsidiary has just lowered a Popsicle for Jack that his mother had ordered six minutes earlier. For the first time, the United States Federal Aviation Administration has allowed a delivery flight over a heavily populated area. Jack’s Popsicle has completed the last mile of its supply chain journey.

Children in Zhangwei, Jiangsu Province point their fingers and cheer for the “toy plane” that will deliver thirty pounds of supplies ten miles from its base in Suqian, China. The 15-minute drone trip would have taken an hour by road. The adults, who have gotten used to seeing the drone landings, go about their business. The drone is operated by the JD.com control center in Suqian. A JD.com deliveryman meets the drone and completes the last mile of the JD.com supply chain.

When an encrypted key is assigned to every container, package and parcel, the promise of borderless transactions will transfer from the digital to tangible real-world property. The products delivered by drones in Blacksburg, Virginia and Zhangwei, Jiangsu Province began many miles, many days and many stages earlier in places neither Jack nor the villagers in China could know. But someone must know where everything starts, what steps it takes along the way and how much that process adds to the final cost. With the advancement of blockchain technology into supply chain management, everyone involved in production, shipping, wholesaling and retailing of all products, from precious stones to perishable food products, can be made aware of each link in the supply chain as each is connected.