The specified file public://inline-images/https_%2F%2Fs3-us-west-2.amazonaws (5)_10.jpg could not be moved/copied because no file by that name exists. Please check that you supplied the correct filename.

Update: President Trump has been made aware of Cuomo's "total meltdown"...

“WE’RE NOT GONG TO MAKE AMERICA GREAT AGAIN, IT WAS NEVER THAT GREAT.” Can you believe this is the Governor of the Highest Taxed State in the U.S., Andrew Cuomo, having a total meltdown! 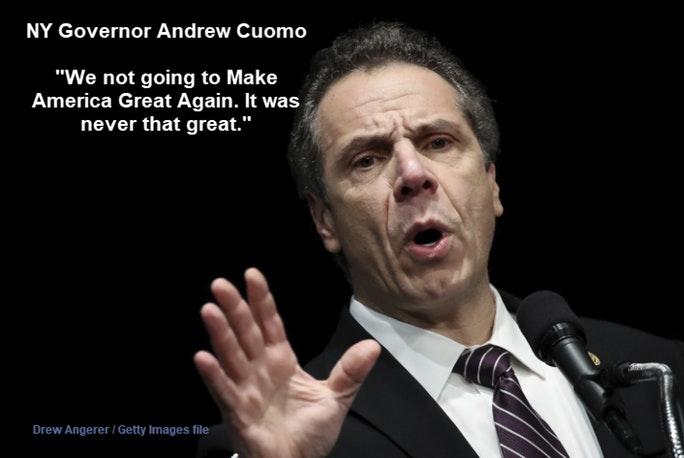 His comment America 'Was Never That Great' drew laughs and gasps from the crowd today.

Cuomo, a potential Democratic presidential candidate in 2020, was speaking at a bill-signing event in New York City, when he turned his attention to Trump's "Make America Great Again" mantra.

"We not going to Make America Great Again. It was never that great," Cuomo said, prompting some in the audience to laugh and others to gasp.

"We have not reached greatness. We will reach greatness when every American is fully engaged," he said.

"We will reach greatness when discrimination and stereotyping against women, 51 percent of the population, is gone, and every woman's full potential is realized and unleashed."

Cuomo could have said he made an error, misspoke, or something similar. It may have blown over. Instead, like Hillary with Iraq, he could not admit a mistake.

I firmly believe that Hillary, not Obama would have been the Presidential nominee in 2008 if she had only admitted she made a mistake on Iraq.

Flash forward to today: How anyone can be so politically stupid is a mystery.

On second thought, we are talking about Democratic politicians.