Despite a tight labor market with numerous openings, there's a growing reluctance to move. 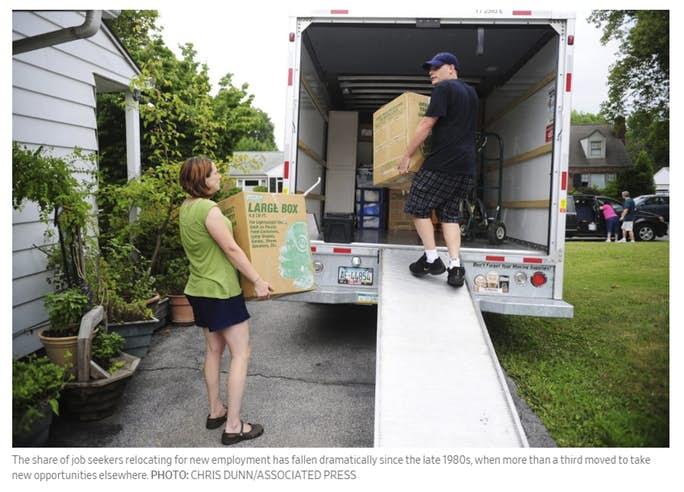 Fewer Americans are moving around the country to pursue new work opportunities, as a tighter labor market and changing family ties make people less willing to uproot their lives for a job.

About 3.5 million Americans relocated for a new job last year, according to census data, a 10% drop from 3.8 million in 2015. The numbers have fluctuated between 2.8 million and 4.5 million since the government started tracking job-related relocations in 1999—but have been trending lower overall, even as the U.S. population grew by nearly 20% over that stretch.

The share of job seekers relocating for new employment has fallen dramatically since the late 1980s, when more than a third moved to take new opportunities elsewhere, according to surveys from outplacement firm Challenger, Gray & Christmas Inc. In the 1990s, job-related moves ebbed and flowed between 20% and 35%, then fell below 20% after 2000. Roughly 10% of job seekers relocated for new opportunities in the first half of this year, Challenger said.

Not on the Move

“The one-fifth to one-quarter of workers who were moving to find positions in the late 1990s is nothing compared to what we saw in the mid-to-late 1980s, when nearly one-third of workers were moving for new positions. Much of that movement could be attributed to economic recovery policies after the 1982 recession,” said Challenger.

“We saw something similar in 2009, when housing prices began to rise after the Great Recession and the annual relocation rate hit 13 percent,” said Challenger. 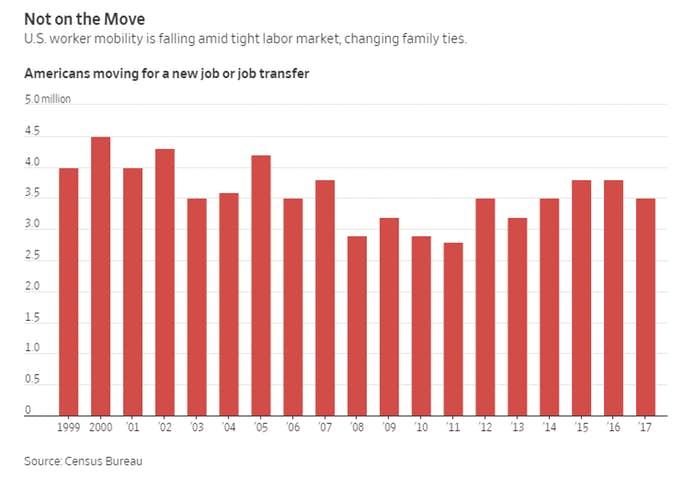 Add it all up and it simply is not worth the disruption.