Before I get into the remaining shale oil reserves, let's first consider the price.  When the oil price collapsed from mid-2014 to a low at the beginning of 2016, frackers cut drilling considerably.  From March 2015 to September 2016, total U.S. shale oil production fell approximately 600,000 barrels per day (info Shaleprofile.com).  However, this decline was not due to the peak in production, but rather, because the low oil price made drilling shale oil uneconomical.

What happens when U.S. shale oil production finally peaks along with much lower oil prices?  Well, that will be the PERFECT STORM for the U.S. shale oil industry.  As I have mentioned in several articles and videos, when the current economic market cycle of 9-years finally rolls over, we are going to have one heck of a market correction.  When the broader markets crack lower in a big way, they will most certainly pull down the oil price along with it.

To get an idea of the total U.S. shale oil production, here is a chart from Enno Peters at ShaleProfile.com: 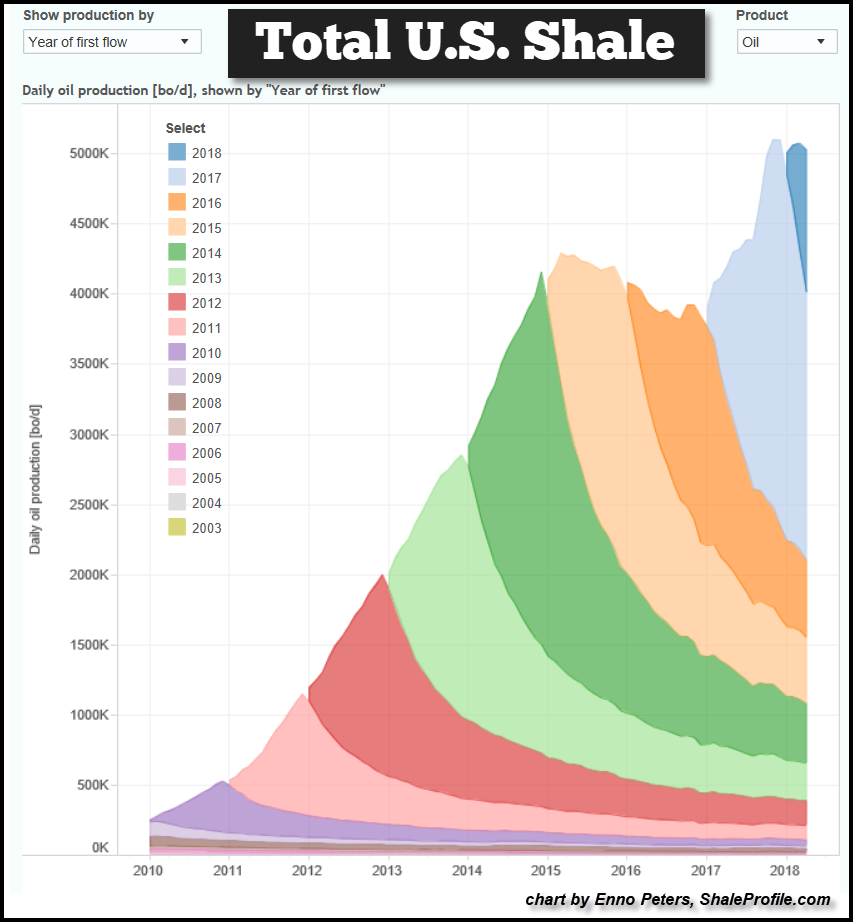 Now, to get an idea of how U.S. shale oil production will decline in the future, I have included a series of charts by Jean Laherrere.  You can check out the entire document by Laherrere and Hall at Forecast For U.S. Oil & Gas Production.  Jean takes the past production profile and bases future production on remaining oil reserves using a Hubbert Linearization formula.  For example, the North Dakota Bakken shale oil production will fall back to a little more than 100,000 barrels per day by 2025, based on a total of 4 billion barrels of total reserves: 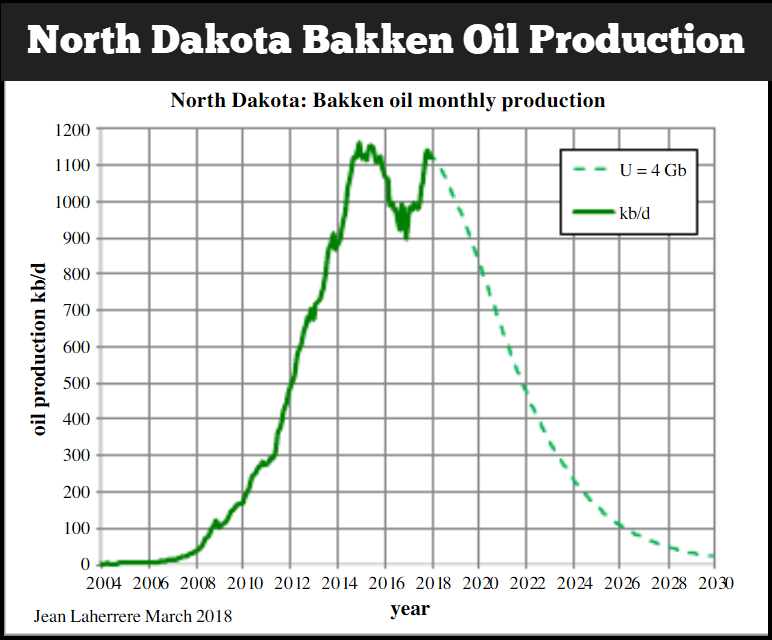 This chart is a bit dated as Bakken oil production is slightly higher than what is shown in the chart, but I believe the downside slope is a realistic forecast.  Here are two more charts showing the future forecast for the Eagle Ford and Permian Basin: 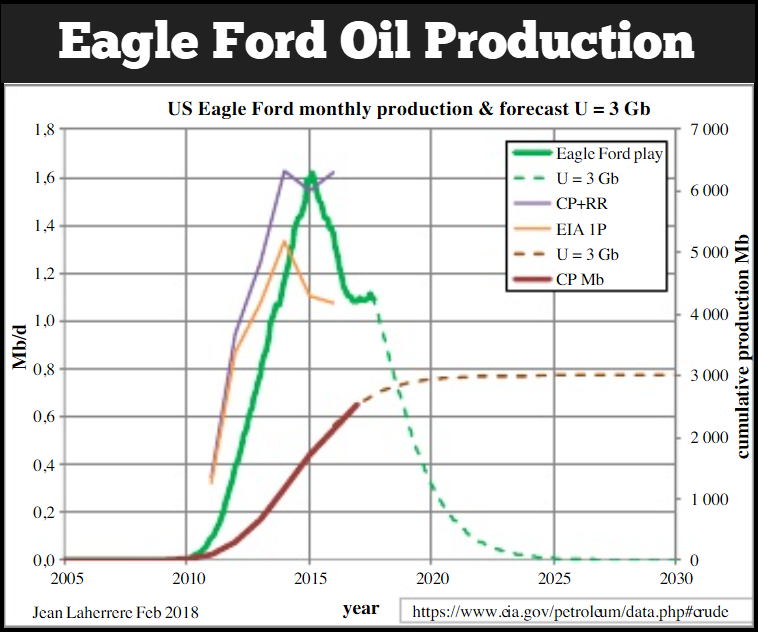 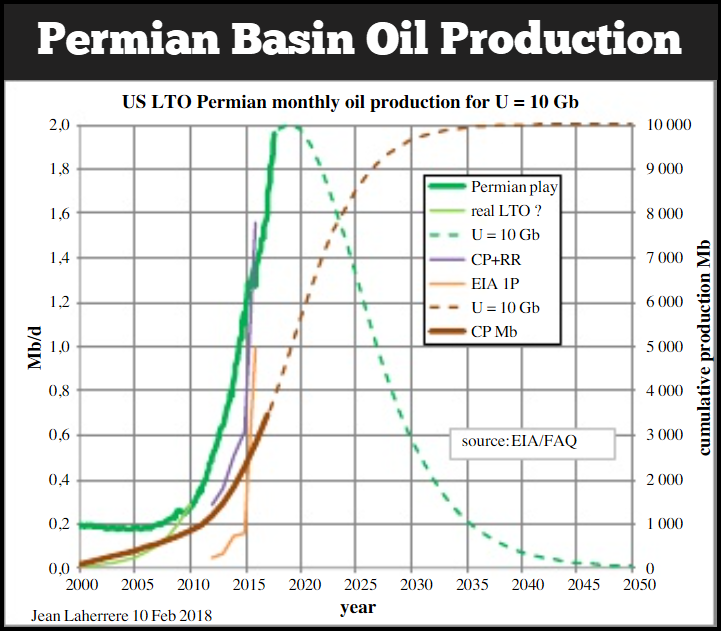 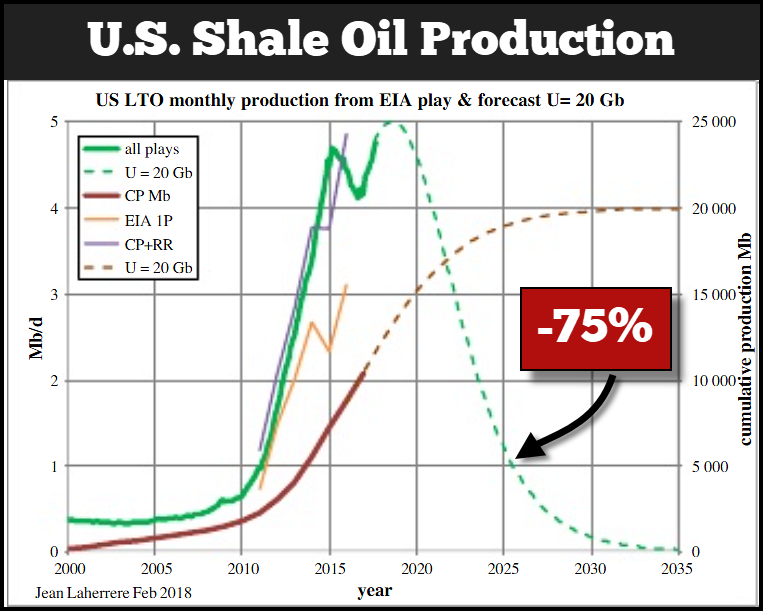 While the Permian Basin is now the largest shale producing region in the United States, companies are still struggling to make a profit.  For example, the largest producer in the Permian, Pioneer Resources, suffered a negative $248 million in free cash flow during the first half of 2018.

So, Pioneer continues to spend more money on capital expenditures than they receive from cash from operations.  And the reason for that is the severe decline rate that plagues the shale industry.  If we look at the following chart, we can see just how steep the decline rate was based on 2017 production: 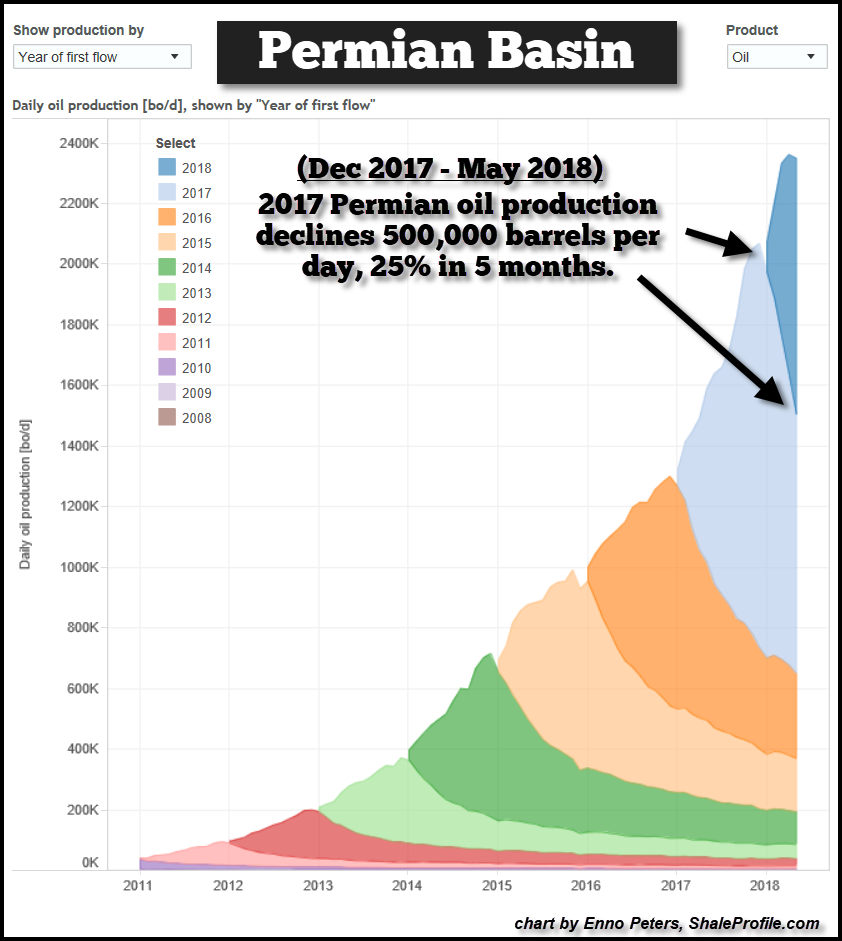 The light blue color represents shale oil production brought on in 2017.  If no new wells were drilled in 2018, then overall production would have declined by 500,000 barrels per day in just the first five months of 2018.  Folks, it takes a tremendous amount of capital expenditures just to replace that 500,000 barrels per day lost.  This is precisely why Pioneer continues to throw good money after bad.

Some might say, "Why does Pioneer continue to stay in business and why does it have a $175 stock price?"  Well, that's a good question.  For one thing, Pioneer has issued a net $5 billion in new stock since 2010 to fund business.  While some shale companies issue debt, Pioneer decided to take advantage of its high stock price by diluting shareholder value to continue the Great U.S. Shale Ponzi Scheme.

Moreover, the $5 billion in net stock issuance helped plug up the hole of the $6.4 billion in cumulative negative free cash flow at Pioneer since 2010.