The specified file public://inline-images/https_%2F%2Fs3-us-west-2.amazonaws (2)_13.jpg could not be moved/copied because no file by that name exists. Please check that you supplied the correct filename.

Foreign Direct Investment (FDI) in the US should be rising. Tax cuts spur investment and the US economy seems much stronger than abroad. Nonetheless, FDI is negative...

The lead-in chart is from the Organization for International Investment report on Foreign Direct Investment in the United States, Preliminary 2nd Quarter 2018.

Second-quarter 2018 foreign direct investment flows in the United States were in negative territory, resulting in a divestment of $8.2 billion, following a relatively strong first quarter. The second quarter was marked by unusually high selloff and purchase activity, which suggests that some $100 billion invested in the United States has transferred ownership abroad. In that quarter, U.S. affiliates paid off $32 billion in loans to related parties. Clearly, much of this unprecedented FDIUS activity is due to changes in ownership. Yet, it can partially be viewed as a response to import tariffs and other trade actions from the Trump Administration as international companies hit the pause button on potential investments.

Foreign direct investment in the United States in 2017 was the fourth-strongest for the past decade, but was down 40 percent from 2016. This followed record-breaking years in 2015 and 2016; FDIUS for each year reached nearly half a trillion dollars.

Looking at foreign direct investment more broadly, foreign companies invest in the United States for many reasons. A list of positive factors include the large U.S. market, world-class research universities, a stable regulatory regime, and a solid infrastructure that allows businesses to easily access the U.S. market.

Whether the United States will retain its status as the world’s most attractive investment location hinges mainly on future macroeconomic developments and changing financial conditions. 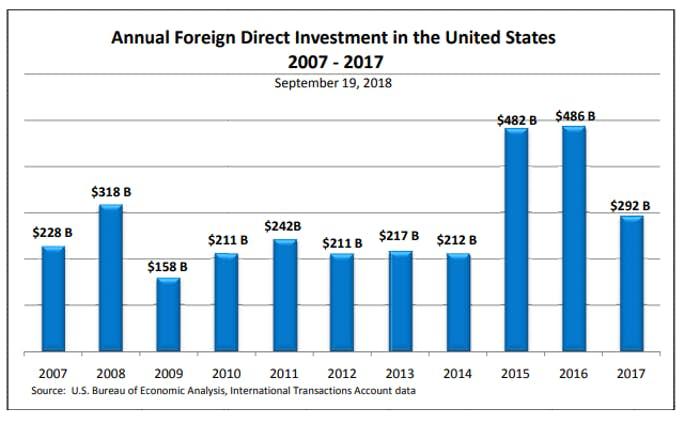 The cumulative level of Chinese investment in the U.S. declined in 2017, according to a new Commerce Department report, showing Chinese investors’ enthusiasm for American assets was waning even before trade tensions ramped up.

China’s appetite for U.S. investment had picked up in recent years, nearly quadrupling from 2014 to 2016. Yet despite some high-profile transactions and rapid growth, China isn’t a large investor in the U.S., making up less than 1% of the more than $4 trillion of foreign direct investment in the country last year.

China’s decline stood out for two reasons. First, because of rising trade tensions between the two nations. Second, because the overall foreign direct investment position in the U.S. continued to increase last year, rising by $260.4 billion in 2017, according to Monday’s report, leaving China an outlier. The Commerce Department said the overall increase “mainly reflected” increased investment from Europe, “primarily Ireland, Switzerland and the Netherlands.”

Although investment from China to the U.S. is small overall, it has been of special concern for the White House and Congress. The administration considered a plan this year to restrict Chinese investment into the U.S., ultimately deferring to a congressional initiative to bulk up the committee that reviews proposed foreign takeovers of U.S. businesses and can recommend the president block such takeovers.

That last paragraph is telling. China accumulates US dollars as a result of China's trade surplus with the US. It would like to invest in the US but can't.

Meanwhile, the rest of the world is having second thoughts.

How Trump Is Repelling Foreign Investment

This year, net inward investment into the United States by multinational corporations—both foreign and American—has fallen almost to zero, an early indicator of the damage being done by the Trump administration’s trade conflicts and its arbitrary bullying of companies and governments. This shift of corporate investment away from the United States will decrease long-term U.S. income growth, reduce the number of well-paid jobs available, and reinforce the ongoing shift of global commerce away from United States. That shift will subject the entire world economy to greater instability.

Unlike speculative flows of capital or indicators of sentiment, these kinds of corporate investment decisions must be taken with 10-, 20-, or 30-year time horizons in mind, and once undertaken, they are difficult to reverse. As a result, if the relative attractiveness of investing in the United States compared with other countries—in terms of freedom from government interference, of dependable access to global markets for both inputs and sales, and of brands and hiring being helped, not hurt, by association with the United States—declines, so should direct investment in the United States.

The numbers are clear. To compare like for like, look at flows of foreign direct investment (FDI) into the United States in the first quarter of 2018, the latest for which data are available from the U.S. Bureau of Economic Analysis, and in the same quarter of 2017 and 2016. In the first quarter of 2016, the total net inflow was $146.5 billion. For the same quarter in 2017, it was $89.7 billion. In 2018, it was down to $51.3 billion. This decline was not driven by changes in Chinese investment, which flows both ways and so contributes little to changes in the net figure.

The decline is all the more worrying since many factors should have been pushing direct investment in the United States up this year. The massive fiscal stimulus passed by Congress should have increased FDI in three ways: by boosting spending, which increases U.S. growth prospects; by making the tax code more favorable to production in the United States; and by cutting the corporate tax rate. Even if one discounts the direct incentive effects for business investment in the legislation, the corporate tax changes certainly encouraged investment.

Consider how the tariffs on vehicles and auto parts under consideration by the Trump administration would feed into future investment decisions by some of the world’s largest multinationals: auto companies and their suppliers. If the United States imposes the threatened 25 percent tariffs and U.S. trading partners retaliate proportionately (as is likely), the move would have a major immediate effect on the U.S. economy. The tariffs would directly cost as many as 625,000 workers their jobs. But that would not be the end of it: shuttering factories also damages the wider communities of which they are a part, hurting other businesses that rely on autoworkers.

As antimarket governments have repeatedly shown, and as was the case with the U.S. auto industry in the 1960s and early 1970s, protection stifles innovation and results in worse products for consumers in the protected domestic industry. Going down that road will, in turn, hurt overall research and development in the United States, of which investment from automakers (including foreign ones) makes up a large part, and the United States’ reputation as a place to do business.

Flows of direct investment, especially of net FDI, into the United States are therefore worth watching as an early indicator of how far the global economy has moved toward a post-American era. The signs suggest that Trump’s approach to globalization is getting the world there faster than many realize.

Some of the ideas in the following article are similar to those presented above. Instead, I list new ideas from the article.

Uncertainty from the administration's negotiation strategies around trade agreements and tariffs are causing people to think about their investment decisions, said Rod Hunter, a partner at Baker McKenzie and former senior director of international economics at the National Security Council under President George W. Bush.

Part of the concern stems from Trump's use of CFIUS, an inter-agency government panel that reviews foreign deals for national security risks, as a way to curb investment. The administration has backed bipartisan legislation to strengthen CFIUS that is making its way through Congress.

Trump is also using 232 investigations, sometimes called the "nuclear option" in trade laws, to counter cheap imports."The 232 tariff cases have made many of our companies pause and wonder what the next two to three years hold," said McLernon.

Federal Reserve Chairman Jerome Powell also has voiced concern on the trade climate's impact on investment. In a Senate hearing Tuesday, he noted that tariffs are leading companies to delay capital spending decisions.

"We don't see it in the numbers yet, but we've heard a rising chorus of concern which now begins to speak of actual capex plans being put on ice for the time being," Powell said.

Let's return to a key idea:

Unlike speculative flows of capital or indicators of sentiment, these kinds of corporate investment decisions must be taken with 10-, 20-, or 30-year time horizons in mind, and once undertaken, they are difficult to reverse.

This is yet another reason that talk of "winning" these trade wars via the methods Trump uses is preposterous.