Sentiment is down for the 3rd straight quarter in McKinsey survey of businesses. Trump's trade policies at heart of it. 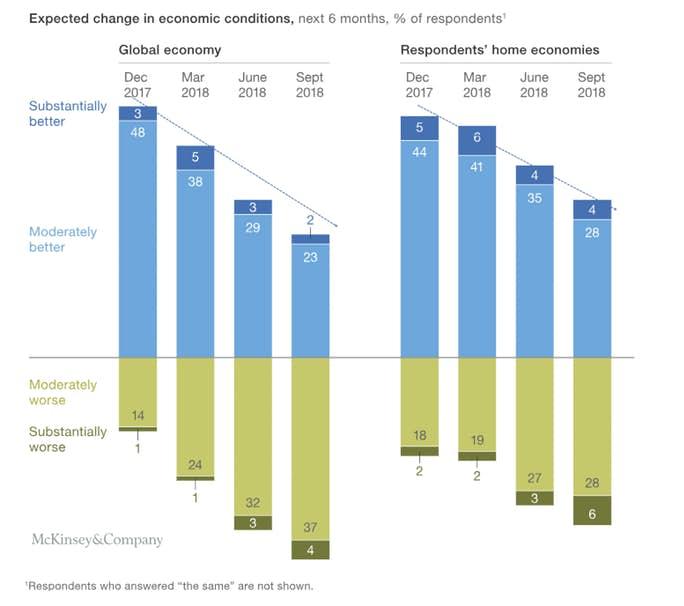 According to the McKinsey Economic Conditions Snapshot, September 2018, business sentiment is down for the third quarter. The global outlook is worsening at a faster pace than local conditions.

As they regard economic conditions at home and in the world economy, executives are warier than they have been all year. For the third quarter in a row, respondents to McKinsey’s newest survey of executive sentiment share less positive assessments of the economy’s current state, and their outlook for the months ahead is also cautious.

Expectations for trade activity are declining, trade-related risks are still perceived as top threats to growth, and for the first time this year, less than half expect the rate of economic growth, both at home and globally, will increase over the next six months.

The view from emerging economies is particularly downbeat. These respondents offer a more negative overall assessment of the global economy, economic conditions in their own countries, and their companies’ prospects. In a few cases, they are also more likely to cite the United States as the country with the best opportunities for their businesses, rather than their home countries or nearby economies.

In their assessment of the global economy, 38 percent of all respondents say conditions have worsened in the past six months, up from 26 percent in June. At 31 percent, the share reporting improvements is even smaller; it’s the first time since December 2016 that a larger share of respondents say global economic conditions have worsened than have improved.

36 percent of respondents say that in the past year, the level of trade between their home countries and the rest of the world has decreased, up from 22 percent who said so in June. In a few regions (North America, most notably), respondents have reported sizable declines in their countries’ trade levels in the past two surveys. 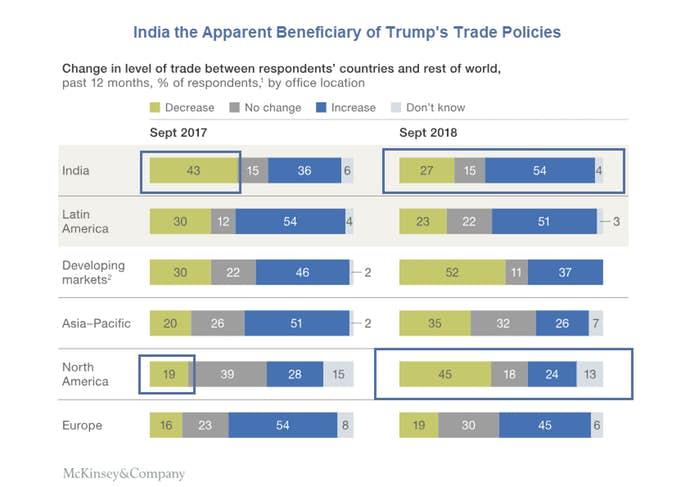 By contrast, those in India and in Latin America are the most likely to report an increase in trade levels, and they are the only two groups less likely to report declines in this survey than they were one year ago.

Looking ahead, respondents also report a progressively less positive outlook on the economy. Compared with the past two surveys, smaller shares predict that the global economy and their home economies will be better in six months than they are now.