The carnival continues with interesting twists such as Ford's paper about using self-hypnosis to create memories... 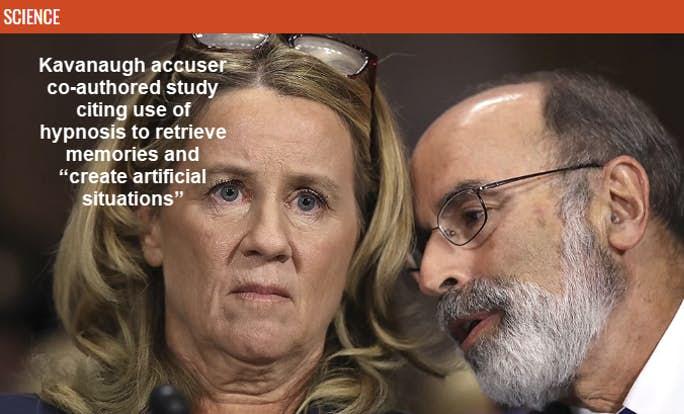 Christine Blasey Ford, a California woman who has accused Supreme Court nominee Brett Kavanaugh of attempted rape in the 1980’s, co-authored an academic study that cited the use of hypnosis as a tool to retrieve memories in traumatized patients. The academic paper, entitled “Meditation With Yoga, Group Therapy With Hypnosis, and Psychoeducation for Long-Term Depressed Mood: A Randomized Pilot Trial,” described the results of a study the tested the efficacy of certain treatments on 46 depressed individuals. The study was published by the Journal of Clinical Psychology in May 2008.

While the paper by Ford and several other co-authors focused on whether various therapeutic techniques, including hypnosis, alleviate depression, it also discussed the therapeutic use of hypnosis to “assist in the retrieval of important memories” and to “create artificial situations” to assist in treatment.

Ford’s paper cited a controversial 1964 paper on the use of hypnosis to treat alcoholics and claimed that “hypnosis could be used to improve rapport in the therapeutic relationship, assist in the retrieval of important memories, and create artificial situations that would permit the client to express ego-dystonic emotions in a safe manner.” The study by Ford and her co-authors also used “self-hypnosis” to help treat their randomized sample of patients.

The 2004 text by Spiegel and Spiegel referenced by Ford and her fellow researchers discusses in detail the use of hypnotism, and even self-hypnotism, to recover memories from traumatic episodes.

“Remember that all hypnosis is really self-hypnosis,” the authors of the referenced 2004 text on hypnotism wrote. “[T]herefore, therapists are only tapping into their patients’ natural ability to enter trance state.”

The authors noted that hypnosis as a means of recovering traumatic memories could also lead to the “contamination” of those memories.

“Patients are highly suggestible and easily subject to memory contamination,” they noted.

With nearly everyone's mind made up, despite the inconsistencies, the carnival will continue culminating in a final vote later this week or next.

If the Vote Fails?

Why not start the process all over? With a new candidate?

Were Trump to renominate Kavanaugh, I believe that would constitute the ultimate political circus.

Strike that. This is neither a circus nor a carnival.

This is a purposeful media- and politically-sponsored demagoguery zoo with no cages and no zookeeper.