A state election is taking place in Bavaria today which should be a key test for Chancellor Merkel's political future, and could result in a political landslide in the state that holds 16% of the total German population and is responsible for more than 18% of German GDP.

Polls indicate that both the CSU (the sister party to Merkel's CDU) and the center-left SPD will both lose votes, though most analysts expect the CSU to be able to form a government with other smaller parties (either the FDP and the Free Voters, or the Greens), which should give Merkel more breathing room in Berlin. She might be able to oust the more combative elements within her government, and could therefore gain leeway over asylum and European policy.

According to DW, a CSU collapse could lead to Seehofer's resignation from Merkel's government, and conceivably Söder's exit from the Bavarian state premiership, which would remove two of the chancellor's most outspoken critics from power, and give her room to govern in the calmer, crisis-free manner she is accustomed to.

On the other hand, a heavy loss and big resignations in the CSU might well push a desperate party in a more volatile, abrasive direction at the national level. That would further antagonize the SPD, the center-left junior partners in Merkel's coalition, themselves desperate for a new direction and already impatient with Seehofer's destabilizing antics, and precipitate a break-up of the age-old CDU/CSU alliance, and therefore a break-up of Merkel's grand coalition. In short: Anything could happen after Sunday, up to and including Merkel's fall.

As ING echoes (full preview below), regardless of the outcome of Sunday’s elections, be prepared for a political landslide with a long-term impact on German national politics: a dramatic defeat of the CSU would first lead to an earthquake in Bavaria, foreshadowing future political developments and structural shifts at the national level; an unexpected comeback of the CSU would probably prompt a political landslide in Berlin. 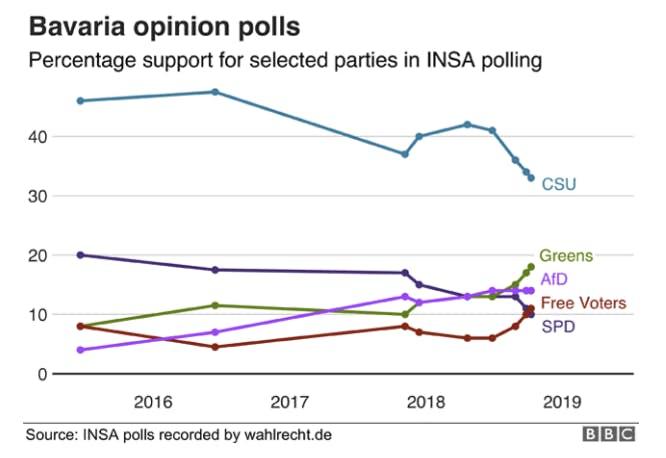 Below we publish a complete preview of what to expect, courtesy of ING Economics' Carsten Brzeski, who notes that Sunday’s regional elections in Bavaria could become an important milestone, either imminently or in the future, and that the result will be a "political landslide - one way or the other."

Since the start of the new government in March this year, German politics have been hijacked by the forthcoming regional elections in Bavaria. In a bid to defend its absolute majority in Bavaria, the CSU (the sister party and coalition partner of Angela Merkel’s CDU) has been openly criticizing Merkel, starting several inner-coalition conflicts which almost led to a collapse of the government. In June, the CSU and CDU clashed bitterly over the issue of whether or not German police should be allowed to turn back refugees at the German-Austrian border, even forcing Chancellor Merkel to convene a special European Summit. For much of September, both parties were in an almost permanent fight over the fate of the head of the domestic intelligence service.

When Bavarians go to the polls this Sunday, many observers hope that political tensions in Berlin will ease. They could be wrong.

Regional elections in Germany often leave a mark on national and international politics. Just think of the election in North-Rhine Westphalia back in 2010, which led to a rule-changing delay of the very first Greek bailout package or the series of SPD defeats at the start of last year, which turned Merkel contender Martin Schulz from party savior to disappointing failure within only a couple of weeks. Regional elections can always be a kind of confidence vote on national politics, a vote on pure regional issues, parties and the main actors or a combination of both. Very often the interpretation of what drove the election results only comes after Election Day.

CSU tried to score by being trouble-maker at federal level

In the case of the coming elections in Bavaria, however, the question of what drove the election result seems to have been answered already. While the CSU tried to make the election a kind of referendum on Merkel’s stance on refugees, the continuous nagging and trouble-seeking in Berlin, initiated by the CSU, has completely turned this around. According to the trend of latest opinion polls, the CSU’s strategy to distance itself from Merkel in order to prevent a rise of the AfD in Bavaria seems to have been a double failure. With less than 40% of the votes, the CSU is on track to come in with the worst result since 1954. The AfD is currently polling at 10%, as are the Free Voters, an EU-sceptical group that wants to return political power to local authorities. The Greens could come in a surprisingly strong second, currently polling at 18%, while the SPD stands at 12% and the liberal FDP at 5%.

Bavaria matters. The Bavarian elections are not only important due to the sheer size of the state, with some 16% of the total German population and more than 18% of German GDP. They also matter because the CSU’s dominance – 12 absolute majorities in the last 13 elections – has been an integral part of the success of the CDU/CSU bloc in federal elections. Currently, some 20% of the CDU/CSU seats on German parliament come from Bavaria.

Looking ahead, the most important aspect for national politics will be the CSU’s performance in Sunday's elections. In this regard, two scenarios look plausible: current polls are right and the CSU suffers a historic defeat, garnering less than 40% of the votes, or it sees an unexpected comeback, with the party coming close to or even above the absolute majority of seats in Bavarian parliament.

Political landslide – one way or the other

Regardless of the outcome of Sunday’s elections in Bavaria, be prepared for a political landslide with a long-term impact on German national politics. A dramatic defeat of the CSU would first lead to an earthquake in Bavaria, foreshadowing future political developments and structural shifts at the national level. An unexpected comeback of the CSU would probably prompt a political landslide in Berlin. German politics continue to be anything but boring.