The specified file public://inline-images/https_%2F%2Fs3-us-west-2.amazonaws_26.jpg could not be moved/copied because no file by that name exists. Please check that you supplied the correct filename. 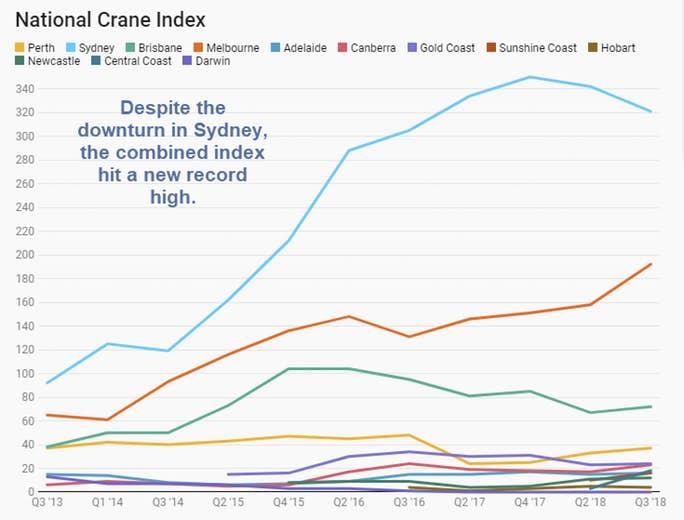 Despite the housing bust and a declining number of cranes in Sydney, It's Still Raining Cranes in Australia.

Construction cranes have become a permanent feature of the urban landscape as developers compete to build more apartment and office towers and governments play catch-up with infrastructure. The latest edition of the RLB Crane Index shows that crane numbers in Australia have hit an all-time high of 735, up from 684 at the last count.

Sydney retains its mantle as crane capital of Australia, but has recorded a net loss of 21 cranes — by far the biggest drop in the survey. Other urban centers are taking up the slack, including the Central Coast, just north of Sydney, which saw a net gain of 15 cranes.

But the biggest mover was Melbourne. With the Victorian capital on track to become Australia's most populous city by 2030, the city recorded a net gain of 35 cranes.

Moral of the Story

Looking for a moral to this story?

I just happen have one: Home builders build until they go bust. It's what they do.

It happened in the US in 2007 and it's happening in Australia today.

The national builders may survive but regional and small leveraged builders get wiped out every cycle.

Bust Will Be a Doozie

Expect lots of doozies. You won't be disappointed.