In stunning irony, the French protest against Macron's diesel tax, while Macron insists the UK abide by climate accord. 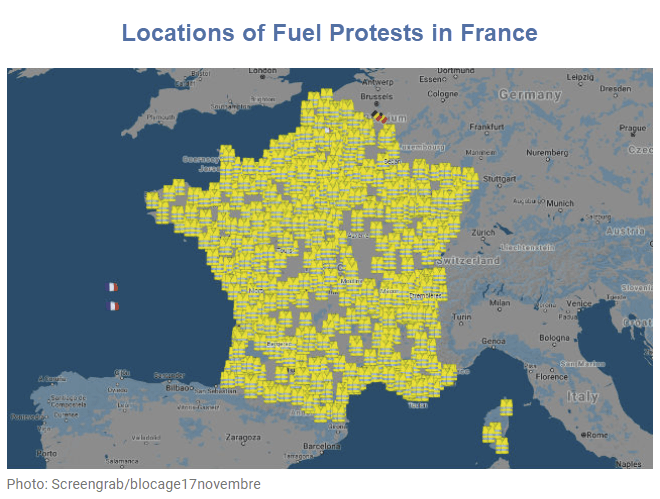 On Saturday, more than 282,700 people, many clad in yellow vests, took to — and, in many places, also literally took — the streets, according to the French Interior Ministry. The ministry said a network of drivers blocked roads at some 2,000 locations across the country, generating backups for miles and causing one death.

The protesters’ chief complaint: the rising cost of diesel fuel. The recent price hike is a direct result of President Emmanuel Macron’s commitment to curbing climate change, which included higher carbon taxes for 2018, the first full year of his term. But beyond the diesel issue, many turned out Saturday to voice any number of other frustrations with the “president for the rich,” who is seen as increasingly removed from ordinary people’s concerns.

The stirrings of the “yellow vest” campaign behind Saturday’s protests began this summer, with online petitions urging Macron to reconsider. But the loudest voice was that of Jacline Mouraud, a white-haired hypnotist and grandmother of three from Brittany who has become the star of the movement.

According to a poll published Friday by the Odoxa agency for France’s Le Figaro newspaper — albeit with only 1,000 respondents — as many as 3 in 4 French people agree.

The French government approved a measure in late 2017 increasing a direct tax on diesel as well as a tax on carbon, allegedly to fight against climate change. The so-called Contribution Climat Énergie (CCE), a French version of the carbon tax, has steadily increased fuel prices in recent years. Drivers across the country have balked at the rising price of diesel as it disproportionately affects workers who depend on their vehicles to get to and from their jobs. Two-thirds of French people expect a “social explosion” in coming months.

The gilets jaunes are a grass-roots revolt against high fuel prices, and they threaten to paralyze France on Saturday.

The gilets jaunes have organised at least 630 protests nationwide via the blocage17novembre.com website, designed by an 18-year-old student. Some call for go-slows on highways. Others want to block roads, which is punishable by two years in prison and a €4,500 fine. Interior minister Christophe Castaner says no “total blockage” will be tolerated.

But several police unions have expressed sympathy, and promised not to punish petty or “middle-size” offences “out of solidarity with the citizens”.

The rise of the gilets jaunes coincides with Macron’s record low 26 per cent approval rating. A poll published by Ifop on November 14th indicates two-thirds of French people expect a “social explosion” in coming months. 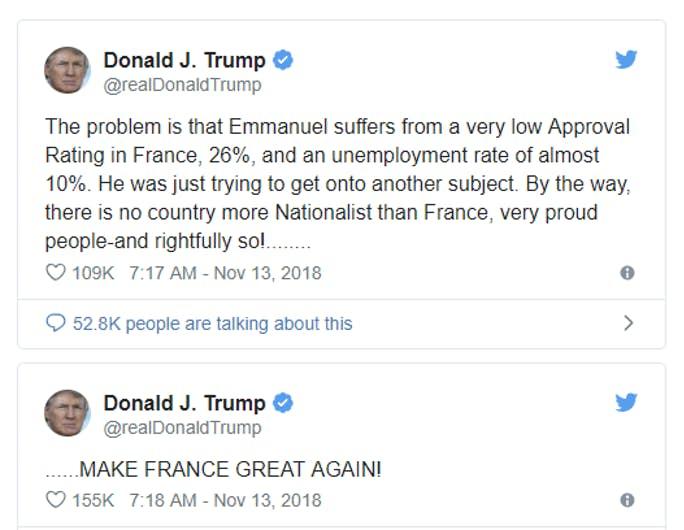 ​Those Tweets from Trump came in the midst of his visit to France last week.

Trump clashed with French President Emmanuel Macron as he arrived in Paris for a celebration marking the 100th anniversary of the armistice that ended the First World War.

Meanwhile, please note that Macron has placed a new demand on the UK in Brexit: Macron Wants Climate Change to be Part of "Final" Brexit Deal.