The specified file public://inline-images/methode%2Fsundaytimes%2Fprod%2Fweb%2Fbin%2F466e73aa-ea99-11e8-ae8b-93697427c437.jpg could not be moved/copied because no file by that name exists. Please check that you supplied the correct filename.

The Met Office has told United Kingdom ministers that space storms could cause massive blackouts and destroy computers. According to the government agency’s study, a space storm could bring down the internet and all communications.

According to The Sunday Times, a new report is claiming that huge solar flares can generate such intense magnetic fields over Earth which in a flash could burn out delicate electronics and even set them on fire. The report, co-authored with scientists from the British Antarctic Survey, Rutherford Appleton Laboratory, and Cambridge University said the UK should construct an early warning system because of their risk. 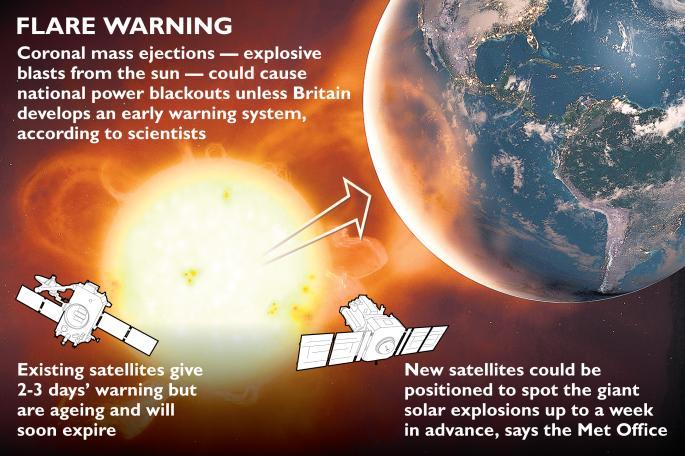 Great Britain is at a major risk of being crippled by huge electrical disturbances caused by solar storms in space unless a satellite network is built that can detect them coming. (And if you guessed the taxpayers are going to foot the bill, you’d be correct.)

“We find that for a one-in-100-year event, with no space weather forecasting capability, the gross domestic product loss to the United Kingdom could be as high as £15.9bn,” The Met Office study said.

“With existing satellites nearing the end of their life, forecasting capability will decrease in coming years, so if no further investment takes place, critical infrastructure will become more vulnerable to space weather.”

It’s not like solar storms of this magnitude have never occurred either.  According to Fox News, in 1859 a giant solar flare doubled the sun’s brightness for a few minutes, followed by a surge in magnetism that caused powerful electrical currents in telegraph wires across Europe igniting widespread fires. Another such solar event in 1989 struck Quebec in Canada and burned out power cables led to a blackout. Researchers fear another such event would burn out high-voltage cables and substations across the United Kingdom.

However, should the government be able to detect the solar storms that could cause massive damage, they say that they would be able to notify citizens that they will need to turn off their devices to avoid their destruction. The UK and other countries already have satellites that are capable of doing the job of warning, such as the Solar and Heliospheric Observatory, launched in 1995 and the 2006 twin Solar Terrestrial Relations Observatory (Stereo) probes. But because these satellites have spent years in space exposed to fierce radiation, they will soon become ineffective and new ones will be needed.

If you are looking for a simple guide for beginners or for more advanced preppers to help you prepare for the possibility of a power grid failure, try reading The Prepper’s Blueprint. Written by Tess Pennington, the book expertly lays out effective ways everyone can begin to prepare for any apocalyptic situation.

“If we have learned one thing studying the history of disasters, it is this: those who are prepared have a better chance at survival than those who are not.” -The Prepper’s Blueprint