In an obvious act of desperation, Overstock will sell its retail business to launch a crypto business called tZero. 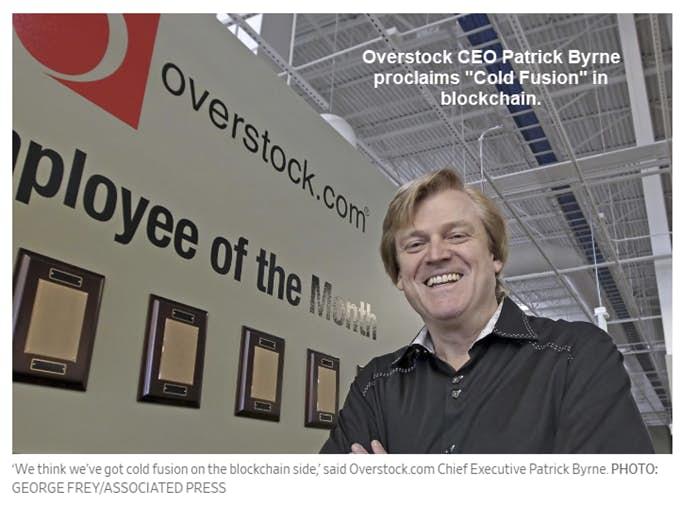 Byrne announced tZero in 2015 and it has been losing money ever since, along with everything else Overstock does.

Overstock has invested $175 million in a fully owned unit called Medici Ventures Inc. that houses tZero and a collection of startups developing new uses for blockchain technology a method of recording, sharing and securing data over public computer networks that underpins bitcoin and other cryptocurrencies.

One startup is working with the Rwandan government to develop a digital property-rights platform. Another, Voatz, ran a blockchain-based pilot with West Virginia that allowed military personnel serving overseas to cast their votes in the midterm elections through a smartphone app.

Overstock shares also have suffered. In 2017, the company’s stock traced bitcoin’s mania, rising from $15 in the summer to nearly $87 by January 2018 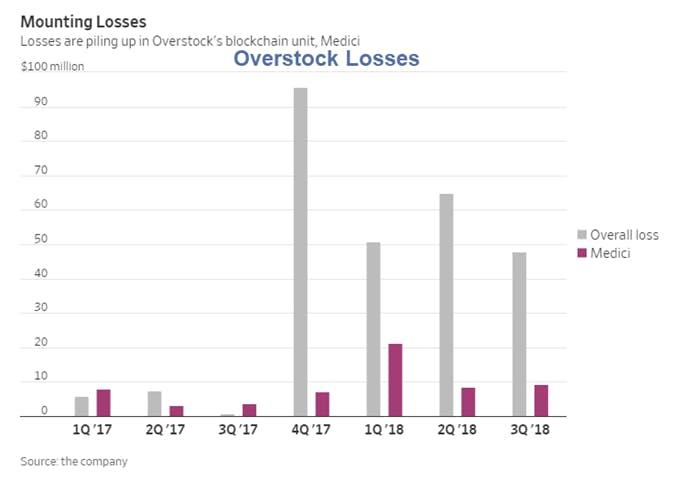 “I don’t care whether tZero is losing $2 million a month,” Mr. Byrne said in an interview.

“We think we’ve got cold fusion on the blockchain side.”

Byrne declined to name potential suitors, but expects to wrap up a deal by February.

He envisions a platform that would trade assets that could be easily traced and tracked. Initially, it would trade security tokens—a combination of a bitcoin-like digital token and a traditional bond or stock. It is also developing a product called digital locate receipt, a way of tracking equities borrowed for short selling.

Trying to get all the regulatory approvals for this has taken time, and tZero has blown past several expected launch dates. The company says it will go live in the first quarter.

Still, security tokens are still more theory than reality. Mr. Byrne said tZero will have one asset available for trading when it launches: its own security token. Earlier this year, tZero closed on an offering of the tokens that raised $134 million.

I like the name. It will head To Zero like most of the rest of the crypto business.

This is an act of pure desperation by a company that clearly running out of cash.

Of course, Byrne can stay in business as long as he can get get enough suckers to buy useless tokens.